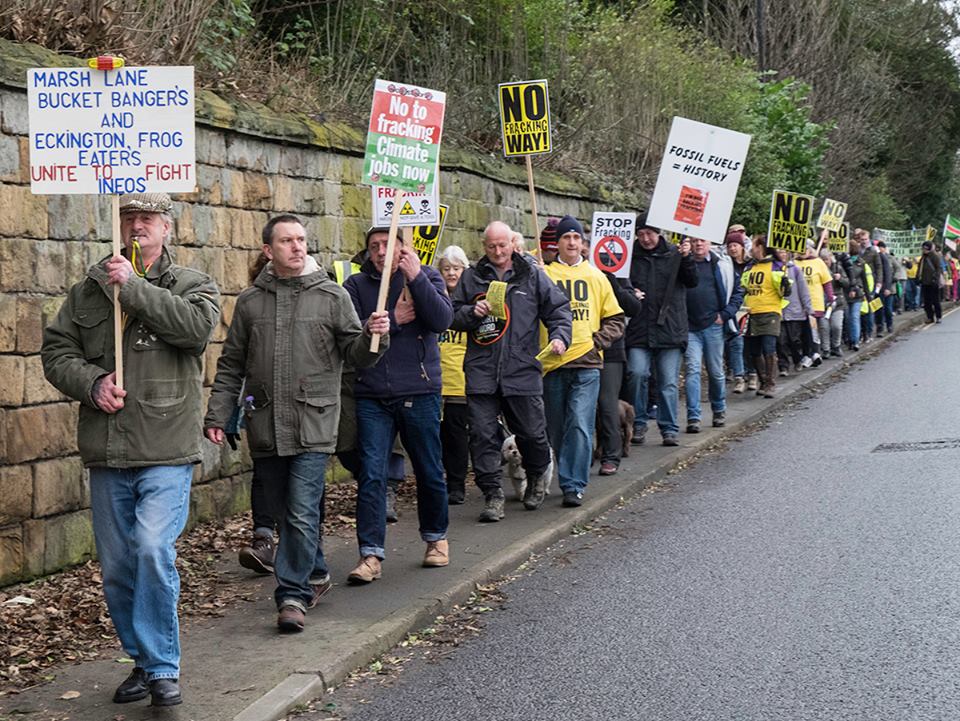 March from Mosborough to Eckington on 25 February 2017. Photo: Jeanette Teare

At least eight anti-fracking groups are supporting marches this Saturday to protest against INEOS plans to explore for shale gas.

The marches converge on a village in north Derbyshire where INEOS has applied for permission to drill an exploration well.

The events come less than a week after INEOS went to the High Court to seek a permanent injunction against protests about its activities. The company said there was an imminent threat to its sites, staff and contractors. The injunction was necessary to “protect people on and around our sites and supply chain”, it said.

A temporary injunction was renewed for two months, when it will be challenged by two anti-fracking campaigners at a three-day hearing. DrillOrDrop report

A spokesperson for INEOS said this evening:

‘INEOS Shale has submitted a planning application to drill a vertical exploration well on land near Bramleymoor Lane as part of its ongoing process of developing an accurate picture of the geology across the East Midlands. As our tests and surveys progress we are committed to continuing our dialogue with local people and are keen and willing to continue our engagement with the community through a formal Community Liaison Group.”

INEOS’s proposed well site in the village of Marsh Lane, is the focus of the Derbyshire event, called No Fracking Day.

Marchers from nearby Eckington, Mosborough and Coal Aston will gather for a rally next to the site in Bramleymoor Lane.

Speakers will include the chief executive of Friends of the Earth, Craig Bennett, Green Party member of Sheffield City Council, Alison Teal, and representatives of Chesterfield Climate Alliance and Frack Free Sheffield.

The owner of a field next to the proposed shale gas site has provided space for stalls, refreshments and children’s activities. The day concludes with a fundraiser at a local pub.

The event has been organised by Eckington Against Fracking and is supported by anti-fracking groups in Harthill and Woodsetts, where INEOS also wants to drill for shale gas. Other groups in Bolsover, Mosborough, Dronfield, South Yorkshire and North Nottinghamshire are also behind the event.

More than 3,000 people are reported to have objected to INEOS’s planning application for Bramleymoor Lane, currently being considered by Derbyshire County Council.

In February 2017, more than 400 people marched from Mosborough to Marsh Lane. This time the organisers said they were expecting more.

One march will begin at The Queen’s pub in Mosborough at 12 noon. It will join marchers gathering in Eckington Precinct at about 12.45 and continue to Bramleymoor Lane.

The third march leaves Coal Aston Community Centre at 12.45pm and will follow the route that INEOS proposes to send heavy goods vehicles delivering to the Bramleymoor Lane site. The organisers said they wanted to raise awareness of what they said was the risk of danger and disruption of the route to Coal Aston villagers.

“We want to show solidarity for the community in Marsh Lane and the surrounding communities who will be torn apart if INEOS is granted planning permission.”

Tracy Lund, from Handley Rose Nursery, said she lives and works 400m from the proposed Bramleymoor Lane site and would also be able to see the Harthill site if that were approved.

“If they [INEOS] are allowed to go ahead, this area will be devastated.”

She said her father-in-law, who was receiving end of life care, lived even closer to Bramleymoor Lane.

“His back garden would be in full view of the site.  He has lived here all his life and at the end of it, he has to endure this. This a rural setting. We have got to stop this now before it’s too late.”

“INEOS say that they will return the countryside back to its original state after any fracking, but what is so upsetting is that in our lifetime we will never see it return back to its current beauty.  There is so much wildlife in this area, horses and other farm animals who will be affected if INEOS have their own way.”

The Bramleymoor Lane planning application is the first of its kind in Derbyshire and the first submitted by INEOS for shale gas exploration. It is for a 2,400m vertical well in the Green Belt, about 300m from the nearest homes.

INEOS said the application complied with local and national planning policy because “the impact of the proposed development on the environment is acceptable and will not cause irreparable or unacceptable damage to interests of acknowledged environmental importance”. DrillOrDrop review of the application