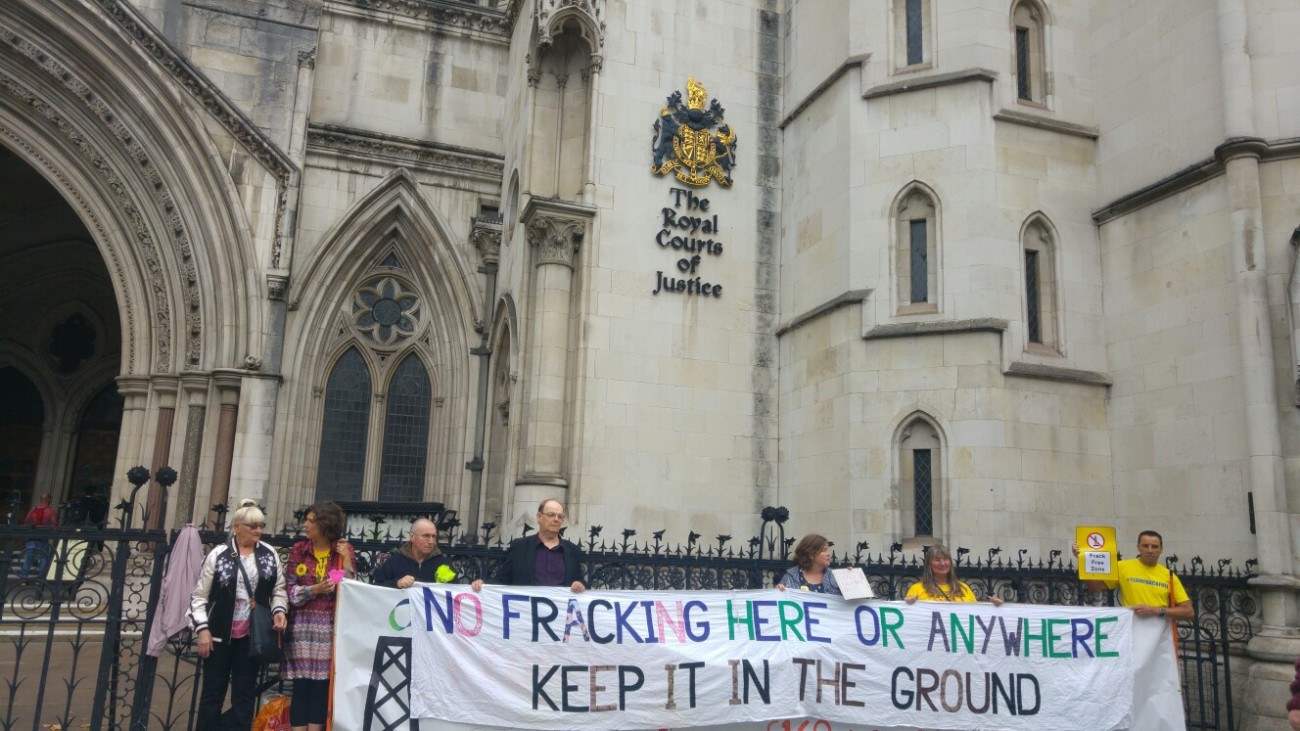 Anti-fracking campaigners at the Court of Appeal on 30 August 2017. Photo: DrillOrDrop

The High Court has told the UK government to change some new rules for environmental court cases to protect those taking legal action.

Three organisations, which challenged the Ministry of Justice, said the rules had made it more difficult for individuals and campaign groups to challenge public bodies in court.

The rules, introduced in February 2017, scrapped automatic caps which limited the costs of losing a legal challenge in England and Wales. Instead claimants had to provide detailed information in open court about their personal finances and a judge could increase the limit on costs at any stage of a case.

Campaign organisations said this made it impossible for individuals and charities to know at the start of a case what they were liable for if they lost.

In a judgement today, Mr Justice Dove said the rules on cost caps would benefit from further clarification.

In almost all cases cost caps will now be fixed at the beginning of a case and personal finances will always be discussed in private.

Judicial reviews, statutory challenges and appeals have been used recently by opponents of onshore oil and gas operations at Balcombe in West Sussex, Preston New Road in Lancashire and Kirby Misperton in North Yorkshire.

The challenge had been brought by the Royal Society for the Protection of Birds (RSPB), Friends of the Earth and ClientEarth. They claimed that the new Civil Procedure (Amendment) Rules were a major barrier to people and charities who wanted to use the law to hold public bodies to account.

In a statement following today’s judgement the three organisations said:

“Today’s verdict is an important victory in the battle for better access to justice in England and Wales.

“People who bravely stand up for nature by going to court can now do so in the knowledge that, once the costs are fixed, they will not be blindsided by a crippling legal bill they were not expecting and hadn’t budgeted for.

“Another victory from the hearing is that claimants will no longer have to reveal their private financial details in open court, as any hearing about costs protection limits will now take place in private. The MOJ must change its rules to include this, so that they are lawful.”

Rowan Smith, a solicitor at Leigh Day, which represented the three organisations, said:

“This is a hugely important judgment for anyone who cares about the environment.

“We have achieved major concessions to the Government’s rules, which make it radically better for access to environmental justice and go a considerable way to allay legitimate concerns of a chilling effect on otherwise meritorious legal claims.

“Evidence before the court gave examples of successful legal challenges to protect birds, beavers and air quality, all which may not have been pursued under the new rules but for this landmark ruling.”

Under the old rules, the costs of anyone losing an environmental challenge were capped at £5,000 (if they were an individual) or £10,000 (if they were an organisation). They were introduced partly because of the international Aarhus Convention, which required that legal action to protect the environment was “fair, equitable, timely and not prohibitively expensive”.

The Ministry of Justice (MOJ) said it had “made measured adjustments to the regime of costs protection” for certain environmental claims in England and Wales, following a consultation. Ministers had argued that the changes would allow “meritorious claims without prohibitive expense” and “reduce the potential for unmeritorious claims”.

“We are pleased that the High Court supports our approach to environmental costs protection, which ensures individuals are not expected to pay above their means.

“We will address the issue of private hearings and set out our position in due course.”