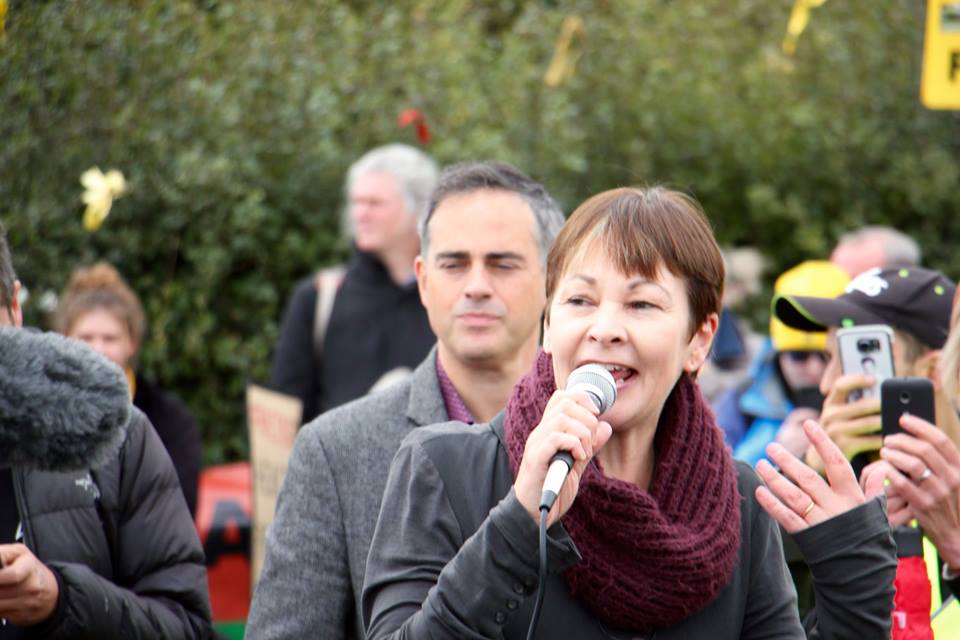 On a visit today, she said residents and activists protesting outside the Preston New Road site were “pioneers” in the battle against climate change.

“I am so proud that the Green Party is in the forefront of supporting people who are taking peaceful direct action here at Preston New Road. We know how important the fight against climate change is.”

There have been protests outside the site since Cuadrilla began work in January 2017, with more than 270 arrests so far.

Dr Lucas, who took part in a symbolic sit-down action at the site entrance, described the protesters as “courageous and brave”.

“There comes a point when you believe this is so serious, that this is really the front line of the climate change battle, that you think that it is right in those circumstances to take this kind of peaceful action that people around me are taking.”

Dr Lucas was arrested following a sit-down protest at anti-fracking demonstrations at Balcombe in West Sussex in 2013 but was acquitted after a trial.

During a rally, Dr Lucas said people opposed to fracking had lobbied Lancashire County Council. The council had listened to their concerns, she said, and refused Cuadrilla’s planning application for the Preston New Road site in 2015. But the decision was later overturned by the Communities’ Secretary following a public inquiry. She said:

“This government, which is supposed to be favour of localisation drives a coach and horses through the local decision and forces fracking on the local community.

“That’s why we’re taking action here today. This action is about true democracy. You know what local people want, you know what is safe for the future for your kids and that’s why you’re doing it by being here today.”

Dr Lucas and Mr Bartley were representing the second political party to visit Preston New Road in the past four days. On Friday, the Shadow Chancellor, John McDonnell, repeated Labour’s commitment to banning fracking if the party got into government and promised support to activists. DrillOrDrop report

Dr Lucas told the larger than usual crowd of campaigners:

“You are the pioneers and when people look back to what you’ve done here, what you’re doing every day here, they will absolutely see the role that you’ve played in this fight back against climate breakdown and corporate criminality.

“Never doubt you are the right side of history. Never doubt that your courage will make the final difference and together we will defeat the frackers.”

“Against will of the community”

On policing at Preston New Road, Dr Lucas said she thought it was sad to see officers acting, as she put it, “against the will of the local community”.

Over the past nine months, campaigners have accused officers of heavy-handed and aggressive policing at Preston New Road.

Dr Lucas put it to officers:

“Of course, you’re doing your job but I hope sometimes you might just think about that too because ultimately all of us are responsible for the actions that we take.”

Police took no action against the rally. But when the politicians left the site entrance officers began to remove protesters from the roadside.