They called on the company to stop its operations at the site because of the presence of bats, a protected species.

North Yorkshire Police said four women aged 35, 36, 54 and 62 were charged with wilfully obstructing a highway and besetting a place to compel the abstention of a lawful act (an offence under the Trade Union and Labour Relations (Consolidation) Act 1992). They are due to appear before magistrates in October.

In separate incidents outside the Kirby Misperton site, the anti-fracking campaigner, Ian R Crane, was arrested while livestreaming. He was later released with no further action. Another protester responsible for the welfare of the people taking part in the lock-on said she had been told by a police liaison officer that she could carry out her role. But she was arrested at about 10am on suspicion of breaching trades union legislation. She was later charged with obstructing a police officer and no further action was taken on the other alleged offence. 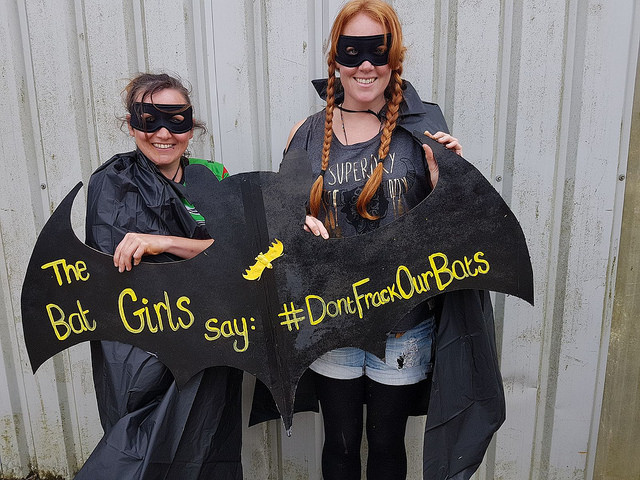 Planning permission for fracking at Kirby Misperton was granted by North Yorkshire County Council in May 2016 after Third Energy said the site was “devoid of bats”. But studies since then have revealed the presence of bats.

Earlier this month, Friends of the Earth warned North Yorkshire Police that Third Energy’s planned operations at Kirby Misperton could unlawfully disturb bats near the site or destroy their habitats. DrillOrDrop report

The Yorkshire Post reported on Friday that Third Energy said it would carry out a wildlife survey before starting operations. 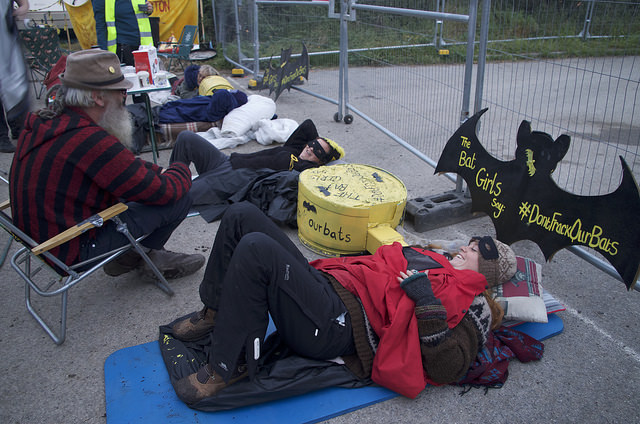 “We want to know what is being done by authorities about the fact that protected species of bats are right next to this fracking site. Even Third Energy have found that there are bats present, but no one knows what is being done about it”.

“We’re worried that Third Energy will just carry on working despite the presence of these protected species and that this will cause them to be injured or killed. It could also destroy their habitats, endangering their longer term survival.”

Another of the protesters, Sue, a grandmother from Little Barugh, said:

“All life is precious. Our bats are protected by law, which Third Energy is trying to ignore. Sadly my grandchildren are not protected from fracking and that is why I am here.”

A spokesperson for North Yorkshire Police said this afternoon:

“Police liaison officers are at the scene to ensure [the protestors] are safe and well.

“Officers have spoken to the people involved and they stated they would be lying in the road for 24 hours, or ‘as long as it takes’.”

“Our core tactic is to engage with people on all sides of the issue, and ask them to work with us to make this a safe and peaceful protest.

“However, once the balance has tipped from peaceful protest to deliberate acts that are unlawful and cause unreasonable disruption to others, including companies going about their lawful business, then we need to take action.”