Please let us know about news you think DrillOrDrop should be reporting for this post. This post will be updated throughout the week.

An opponent of Third Energy’s plans to frack at Kirby Misperton occupied a wooden tower built at the gate of the site in North Yorkshire.

Campaigners built the tower because they believe photographers and citizen journalists were being targeted by police. This is the second tower built at the site entrance this week. 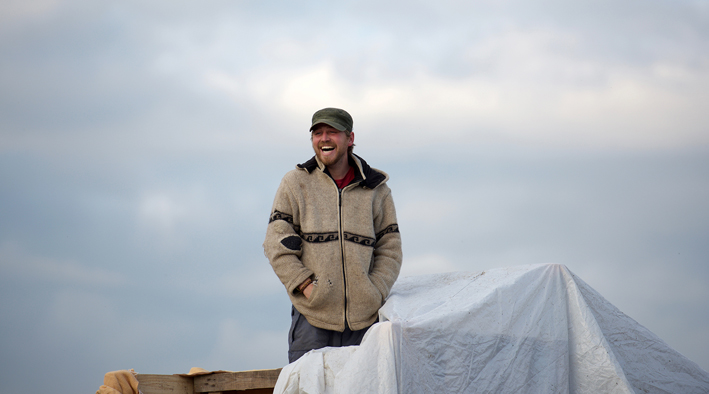 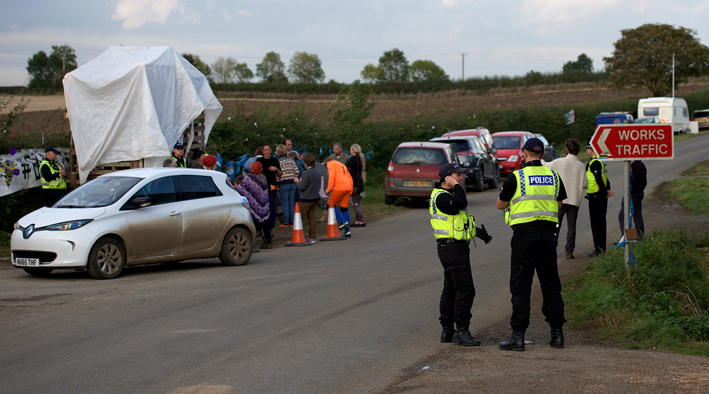 The protester in the tower, Eddie Thornton, said he planned to stay overnight:

“It is essential for our safety and legal protection that we are able to film the police unhindered. The UK law is very clear that citizens have the right to film and photograph police officers, and we have repeatedly ask that that right is respected.

“All I want to do is observe and document what is happening at the entrance to the fracking site. I am causing no disruption or obstruction – you’d think they’d prefer me to be up here in a tower! I’ve explained my intentions to the Sergeant below, that I’m only here to observe, and I have asked him not to waste further resources on me as I mean no-one any harm”.

A group of about 20 opponents of Third Energy’s fracking plans at Kirby Misperton in North Yorkshire took part in a “slow walk” protest.

North Yorkshire Police said public liaison officers “engaged with members of the protest community earlier in the day to facilitate the peaceful protest”. The road was not closed and the protest lasted about 20 minutes.

“We need to balance the needs, wishes and rights of everyone at Kirby Misperton, including the right of people to peacefully assemble and protest. We are completely impartial in relation to hydraulic fracturing. However, one of our roles is to support and protect those engaged in peaceful protest. Officers will continue to assess the situation, engage with the protest community, and explain clearly what is safe and reasonable, as we did today.” 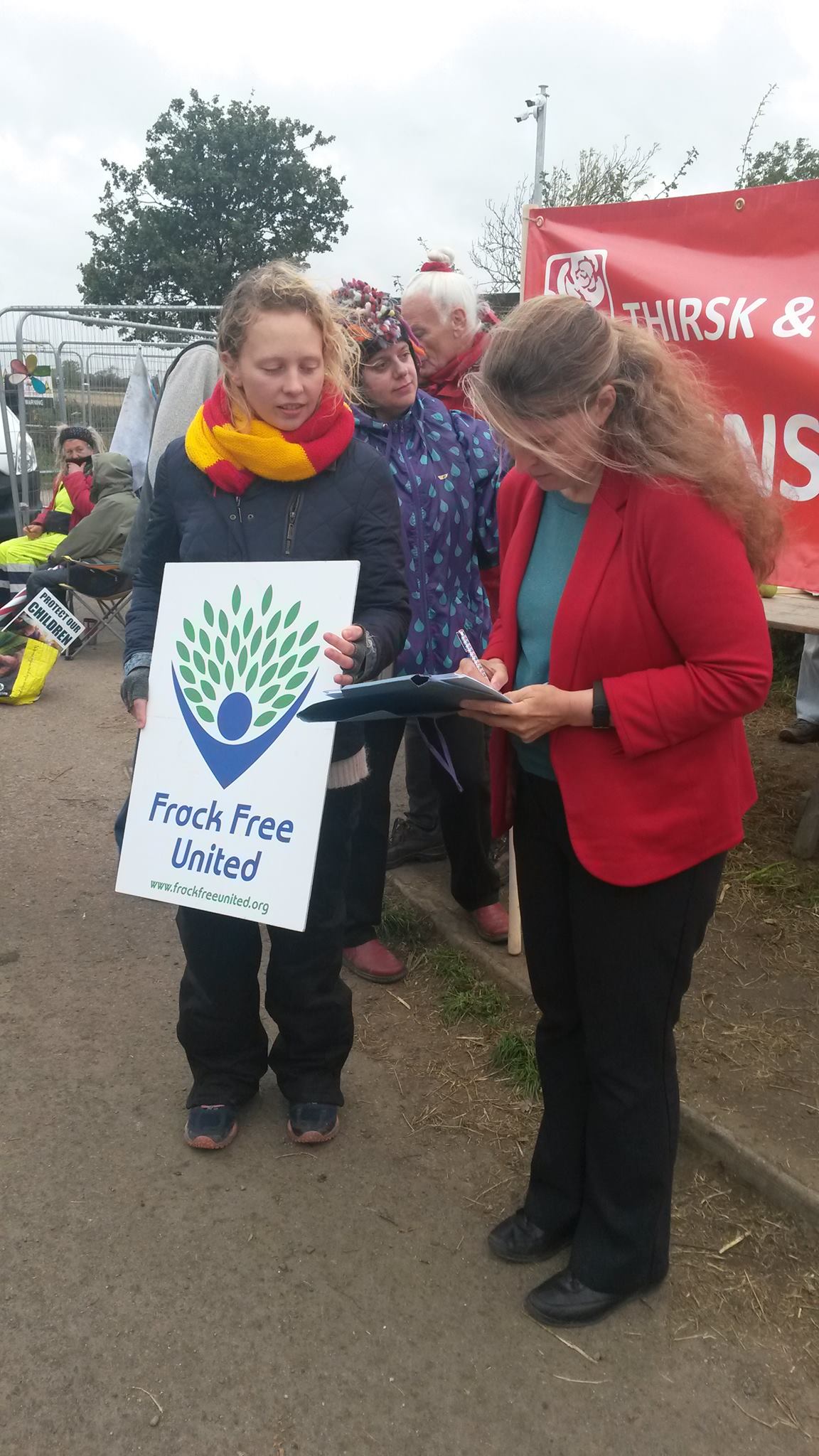 The Labour MP for York Central, Rachel Maskell, promised to talk to police about concerns that officers had been heavy-handed in their operations at the fracking protest at Kirby Misperton.

During a visit to the protest, Ms Maskell told MinsterFM:

“Many of the protestors are telling me they have been heavily handled by police and there have been some injuries as a result. I communicated that back to the police.”

Ms Maskell said she would follow up the issue with the North Yorkshire force. She told activists:

“I am very concerned that nobody is taking any notice of climate change and the real impact that that’s having and the fact that the government is just giving a clean pass through to frack across North Yorkshire at the cost of the natural environment, the local economy all for the profit of these small energy companies. It’s an absolute outrage.

“I’ve come to show solidarity with those people who are standing here just trying to protect our environment. I’ve talked to the police while I’m down here about their operations. Clearly people should have a right to protest and to protect the things that are so important.

“This is just the beginning. It’s not about one well for Third Energy. It’s about having wells across north Yorkshire. That is going to be so detrimental.

“I do believe that people should have the right to protest, should have the right to object to this type of operation. We must redress the imbalance of power that these energy companies have over the whole community which has clearly responded to object to what’s happening here. We’ve got to take these issues back down to Westminster to make sure that we continue to apply pressure.”

Opponents of plans to frack at Third Energy’s site at Kirby Misperton in North Yorkshire blocked access to one of the company’s suppliers.

A man climbed onto a lorry at Sky Scaffolding, in Whitby, at about 7am and remained until about 11.45am, when the company removed a section of fencing to access the site.

A spokesman for North Yorkshire Police said a 21-year-old man had been charged with hindering people carrying out their lawful business under the Trades Union and Labour Relations (Consolidation) Act. He is expected to appear at Scarborough Magistrates Court later in October.

Women dressed in white gathered outside Cuadrilla’s Preston New Road site near Blackpool for the weekly call for peace. This week’s event was followed by a Peaceful assembly for our world gathering, organised the the Catholic Climate Movement.

“We should be investing in renewables” – Green Party co-leader

Jonathan Bartley, the Green Party, co-leader, visited protesters opposing Third Energy’s fracking plans at Kirby Misperton in North Yorkshire. He was quoted by the local paper, the Gazette and Herald:

“It’s an honour to join activists on the frontline of the fight against fracking.

“Instead of destroying our climate commitments by drilling for gas, we should be investing in renewable energy for the future.”

He posed for photographs with food delivered for a harvest festival event to be held outside the site. 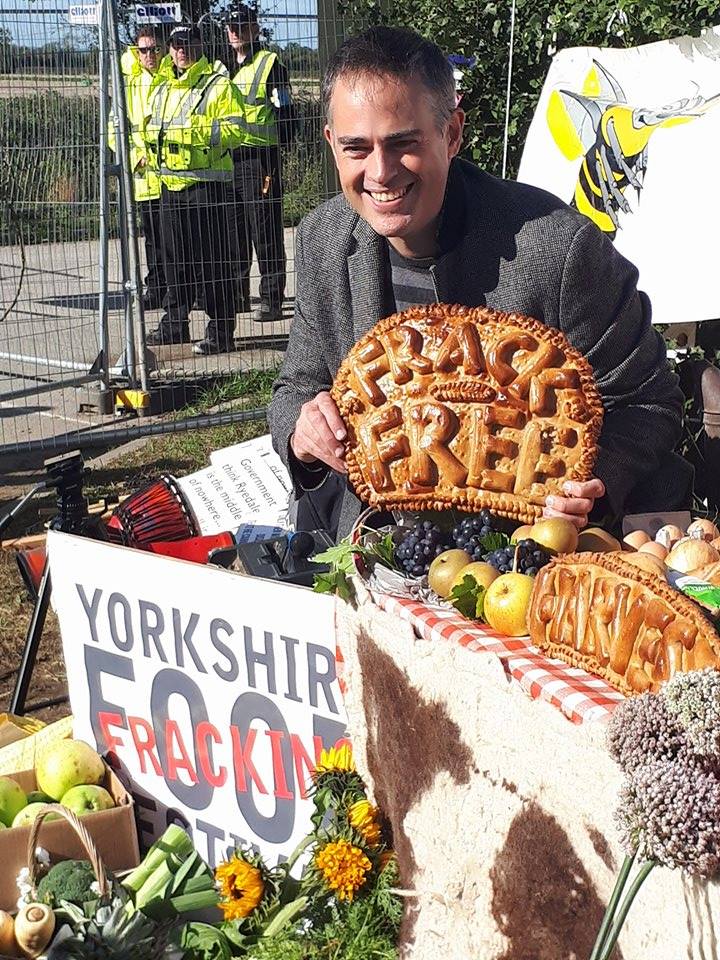 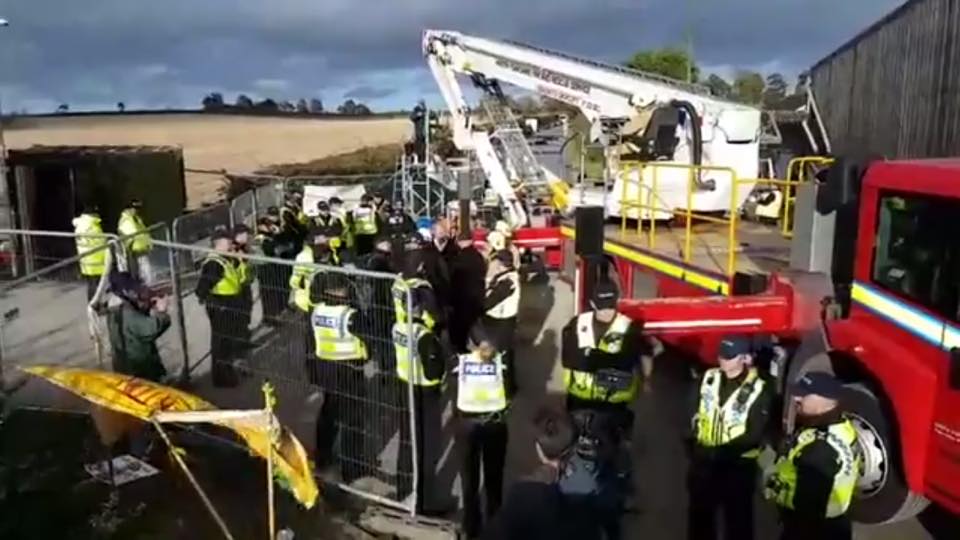 Police called in the fire service to help remove a protester from a wooden tower built on the verge next to Third Energy’s fracking site at Kirby Misperton.

He had been using the tower, which measured about 7ft, as a view point from which to video policing at the site. He continued to film during the extraction operation.

North Yorkshire Police said a 23-year-old man was arrested for obstructing a police officer. DrillOrDrop report and reaction from the Fire Brigades Union

Two men locked themselves together at the entrance to the Kirby Misperton site at about 4am.

North Yorkshire Police said when police and security intervened an officer was pushed over and injured and a security guard was bitten.

A campaigner was later treated in York hospital and reported that a colleague checking on his welfare was ordered out of the reception by security staff.

“The era of fossil fuels is over. Renewables are the future.”

He said MPs from across the country were looking at what was happening at Preston New Road and thinking that they didn’t want “that sort of trouble” in their constituencies.

“That’s why what you are doing here is so important because it is sending that message to MPs.”

He called for a vote in parliament on fracking and predicted supportive MPs were changing their minds and that there could be a majority of MPs who would vote against the process.

He said anti-fracking campaigners were sick of Cuadrilla, fracking, the “dash for gas”, local democracy being trampled on and of local people being disregarded. But he added:

“Nobody can ignore you here today. We aren’t going to be ignored. We are going to be ever-present here until this ends.”

He promised to return to Preston New Road “every few weeks” for Green Monday protests until “we win”.