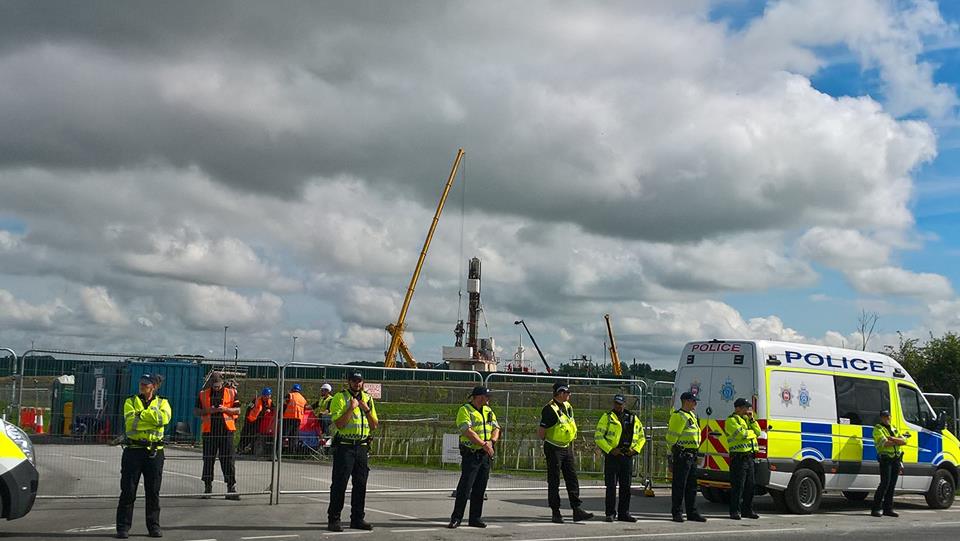 The government suggested today that Lancashire could still receive financial help towards the cost of policing protests against Cuadrilla’s plans to frack for shale gas near Blackpool.

Baroness Vere, a government whip, told the House of Lords, a decision on the funding had not yet been made.

In April, the Lancashire Police and Crime Commissioner, Clive Grunshaw, said the Government had made no extra provision to help meet the costs of policing protests.

But a spokesperson said the commissioner had made another request in the summer:

“The Commissioner wrote to the Minister for Policing and the Fire Service on 14 August to outline that the costs of the policing operation to the end of July had reached £3.1 million. We understand that this is now being considered.”

“Special grant funding has been used to support fracking protests before. In 2014 Sussex got £904,000. Greater Manchester applied for it but it was refused because it was not a significant amount of their budget.

“However, in the case of Lancashire, the application for £3.1m is still under consideration. No decision has yet been made.”

The anti-fracking protests outside the site at Preston New Road near Blackpool, are now in their tenth month. Police have estimated their operations are costing an estimated £450,000 a month.

Green Party peer, Baroness Jones of Moulescoomb, accused the government of breaking its promise on local decision-making by overturning the refusal of planning permission for the Preston New Road site. She also said the government had “incurred hundreds of thousands of pounds of extra policing costs which the public has to pay”.

“Peaceful protest is a vital part of our democratic society but it’s important that protesters protest within the law.

“If people were able to stay within the law then maybe the tax payer wouldn’t have to pay for all the additional policing costs.”

“My suggestion to the government in terms of policing is to follow Scotland’s example and ban fracking, therefore there would be no policing costs.”

But the former Conservative minister, Lord Tebbit, called for a crackdown on protests:

“If the police and the authorities were to give in to the Nimbys who are against fracking, the next thing will be the Nimbys who are preventing planning consent being given to deal with our crisis of shortage of homes for people. They would be at it as well. It’s Nimbyism and it needs to be put down.”

Baroness Vere quoted from a public attitude survey by the Department for Business, Energy and Industrial Strategy (BEIS):

“The most recent figures from that survey show that the vast majority of people – the public – 90% say they simply don’t have enough information about fracking. That is where the problem lies. Not that it is taking place.”

The survey found that support for fracking in this survey stood at 16% and 33% were against, the biggest gap since the questions were first asked. A spokesperson for BEIS said:

Baroness Vere said it was a shame that Scotland would not be participating in fracking following the decision by the Scottish Government to extend the moratorium. But fracking would be “an important of our energy security going forward”.

“A third of our energy demand comes from gas. We do currently import a huge amount of gas and by 2030 we could be importing ¾ of the gas that we use. That will come in ships and it will come from the US, which is a very long way away. That is why we need fracking.”

Updated 10/10/2017 with quote from Lancashire Police and Crime Commissioner.