In the past few minutes, police in North Yorkshire have removed an anti-fracking campaigner from an observation tower next to Third Energy’s fracking site at Kirby Misperton.

To cheers from supporters, Eddie Thornton, was lowered to the ground in a canvas stretcher and taken to police van.

Campaigners say the tower, made from pallets over the weekend, allowed them to document the operations of police and security guards at the site entrance.

Mr Thornton, spent last night in the tower and broadcast live video during the day. He has been arrested on suspicion of causing a danger to road users and obstructing a police officer. He said the police had failed to say how he was obstructing their duties and has refused to come down.

This is the second tower constructed on the grass verge near the site entrance. The first tower was removed by police after they used fire service equipment to extract a campaigner.

The Fire Brigades Union, which has voted to oppose fracking, criticised the use of its hydraulic platform.

In the past hour, Mr Thornton has filmed officers using climbing gear removing his bedding, food and water from the tower. He was then strapped into the stretcher to be brought down by a specialist climbing team. 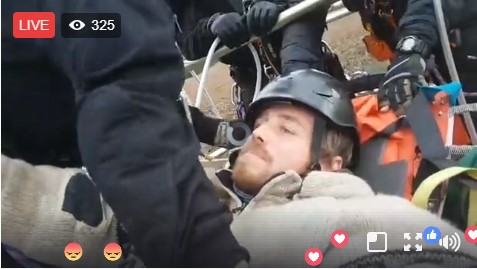 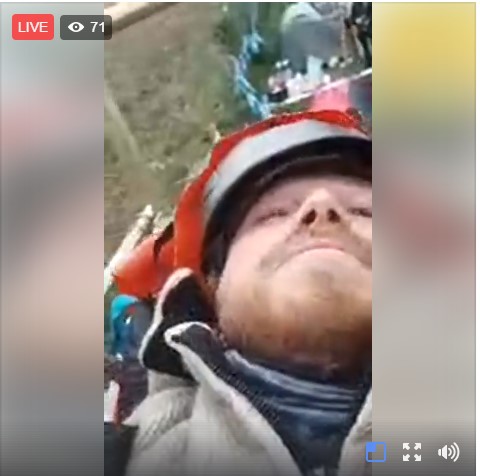 “All I want to do is observe and document what is happening at the entrance to the fracking site.

“I am causing no disruption or obstruction – you’d think they’d prefer me to be up here in a tower.

“I’ve explained my intentions to the Sergeant below, that I’m only here to observe, and I have asked him not to waste further resources on me as I mean no-one any harm.” 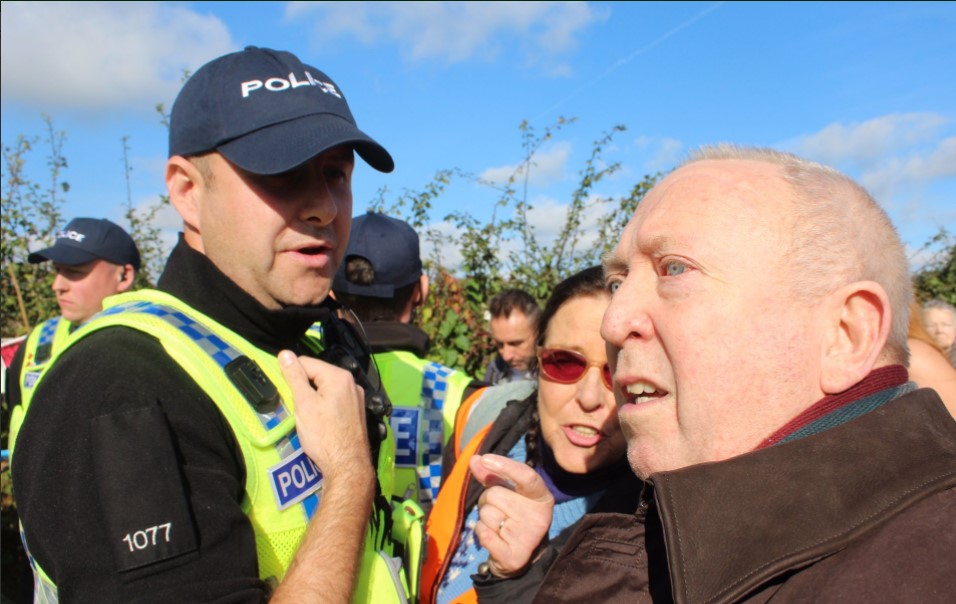 “UK police forces work on the fundamental principle of consent, but if local residents are beginning to question whether officers are working to protect them or just the interests of the oil and gas industry the notion of consent has broken down – and trust must be repaired.”

There were angry scenes during Mr Taylor’s visit when police were accused of forcibly moving Jackie Brookes, a 79-year-old great-grandmother who had been serving tea and cakes to protesters. 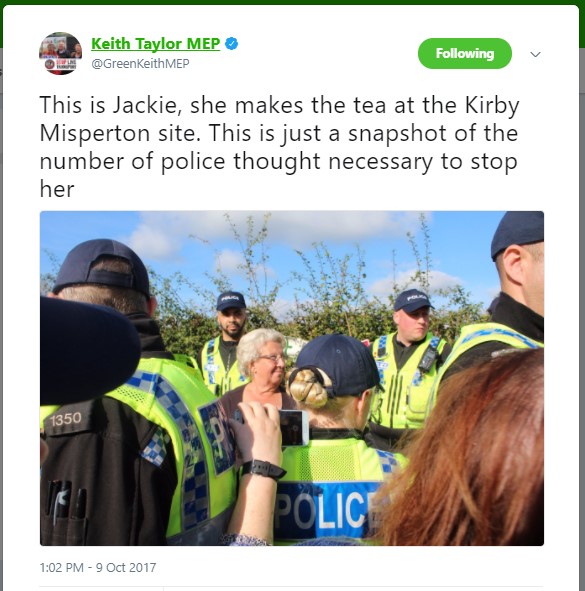 “What I’m particularly concerned about is the tactics some of the police are using here, and across the country. That is why I’m calling for the National Police Chief’s Council to urgently review its guidelines for the policing of fracking protests – it’s a call that I’ve been making for months but so far remains unheeded.”

“It is becoming increasingly clear that political pressure is being brought to bear on police forces to act as the legal enforcers in a drilling debate the government is losing. The Government is in danger of allowing industry interests to undermine our fundamental freedoms.

“An authoritarian crackdown on British citizens’ right to protest will not change that truth. I and my Green colleagues will continue to stand up for and stand alongside fossil fuel protesters across the UK.”

Superintendent Lindsey Robson, of North Yorkshire Police, made a statement on today’s operation:

“Officers had to move several people away from a tower of pallets this morning, after we received advice from the local authority that it may not be safe. While some people were unhappy, we spoke to them and asked them to move for their own safety, which they did. We will always act to protect people from harm.”

A police spokesperson denied that the woman serving tea had been arrested. Police action around the tea table had been related to the wooden tower, he said.

Campaigners have accused the police of targeting citizen journalists and people filming the protests. A spokesperson for North Yorkshire Police denied this:

“It is completely wrong to suggest anyone has been arrested for filming. Citizen journalism is a feature of modern life, and police officers are now photographed and filmed more than ever. We recognise the valuable role of the media and amateur photographers, and will seek to co-operate with them as much as possible.”

But this afternoon Cat Cray posted a video showing a police officer arresting a camera operator on the pavement in Kirby Misperton.

“We need to balance the rights, needs and wishes of everyone at the site, including those who want to assemble and protest safely and peacefully.

“Every day, officers will engage with the protest community, explaining clearly what is acceptable in terms of safety and reasonableness, and what action will be taken if necessary.”

But the impartiality of the police has been questioned in the local media.

Writing to the Gazette and Herald, Barrie Gillespie, of Malton, asked whether the police were, as they have consistently stated, carrying out their duties impartially.

“We may question whether the presence of some 50 police officers and the imposition of stringent constraints on the protesters’ activities are really impartial.

“Article 11 of the Human Rights act enshrines the right to protest peacefully and the Government’s own guidelines recognise that legitimate protest may include inconvenience and nuisance to others.

“The police do indeed have a duty to uphold that right and to defend protesters no less than others. Events at Kirby Misperton look quite different to this.”

Christopher Pickles from Gilling East, also writing to the Gazette and Herald, said:

“On September 15, the sight of 24 police marching in to remove a few young people in order to let a security van in and out of the KM8 site made a memorable image. Do we want the police to be used in this way, supposedly in our name?”

June Smith, from Helmsley, writing in the same paper, said:

“After standing at the gates of a potential fracking site at Kirby Misperton, I realise we now live in a police state. Democracy is dead. What our soldiers fought and gave their lives for has gone.

“To find a policeman in Helmsley is like discovering a pot of gold, but they are present at KM8 in huge numbers to facilitate a dirty industry that will destroy our countryside and way of life, the air we breathe and the water we drink. Their vehicles block the roads both to Kirby Misperton and Habton.

“A man has been arrested and released on bail after climbing onto a tower made of pallets at Kirby Misperton.

“The 33-year-old man was removed from the top of the structure by a team of specially-trained police officers, at about 5.45pm on 9 October 2017.

“He was arrested on suspicion of causing a danger to road users, and obstructing a police officer. He has been released on bail this morning as enquiries continue.

“The tower of pallets, which was on the verge of Habton Road, was dismantled by the local authority.”

Updated 10/10/2017 to include statement from North Yorkshire Police