North Yorkshire Police reports that about six campaigners delay a delivery to Third Energy’s fracking site at Kirby Misperton by about 20 minutes.

Some of the first trials arising out of anti-fracking protests outside Third Energy’s fracking site in North Yorkshire are to go ahead in the spring.

A district judge, sitting at York Magistrates Court today, set dates for cases in April and May.

Nearly 30 people, charged with a total of 47 offences during protests at Kirby Misperton, were represented in court today.

They deny charges including obstructing the highway, obstructing or assaulting a police officer and offences under Section 241 of the Trades Union and Labour Relations (Consolidation) Act.

More than 150 people, many carrying anti-fracking banners, were waiting outside a meeting of Ryedale District Council an hour before the start. But when people were allowed in, entry was limited to 30.

The meeting rejected proposals to employ a specialist to represent them at a hearing that will decide the area’s fracking policy for the next 20 years.

The figures show there were a total of 330 arrests during 2017 and almost all (307) resulted in charges. A majority of the arrests were during the summer.

Less than 15% were under the Public Order Act, which deals with harassment, abusive behaviour and the risk of disorder.

North Yorkshire Police says the additional cost of policing the protests at Kirby Misperton in December was £58,488. This is less than half the cost in November (£147,881) and less than a quarter of October (£233,704).

The total spent in 2017 reached £621,787. This included overtime, mutual aid, equipment, subsistence and travel-related costs. It does not include the cost of officers assigned to police the site on a day-to-day basis, the police said.

An opponent of Cuadrilla’s plans to frack at Preston New Road climbed onto the cab of a lorry delivering to the site near Blackpool at about 4.30pm. At the time of writing (7pm), the campaigner was still on the lorry. We’ll update with new information as we get it.

North Yorkshire Police reported that two men were arrested in connection with allegations that pellets had been thrown into Third Energy’s Kirby Misperton site and eaten by a guard dog, which was sick and collapsed. The dog was taken to a vet for treatment

The police said a 42-year-old man was arrested in Kirby Misperton at 1.30pm on Monday 8 January. A 61-year-old was arrested at 2.50pm at Tadcaster bus station that day. The police added:

“Several pellets were seized from the site”.

Both men were released on bail, with a condition to stay away from the site gates. They have not been charged.

A statement from Kirby Misperton Protection Camp described the allegation of poisoning as spurious.

“We believe that this allegation has been made in response to a formal police complaint, following threats of violence to protectors made by the security dog handler in question.”

On 26 January 2018, bail conditions against the two people arrested were dropped. The matter remains under investigation.

Campaigners opposed to IGas’s operations at Springs Road established a camp near the site on 9 January 2018. Deliveries have been delayed by slow-walking protests.

Two pairs of opponents of  Cuadrilla’s shale gas operations in Lancashire locked themselves together at about 5am outside the site at Preston New Road near Blackpool.

The lock-on protest was the first of 2018. A team of four specialist police officers removed the campaigners by early afternoon.

Police said four people, a 17 year old girl, men aged 43 and 56, and a 39-year-old woman had been arrested on suspicion of wilful obstruction of the highway.

A spokesperson for the opponents said the action was in memory of two anti-fracking campaigners who died suddenly at the end of last year. 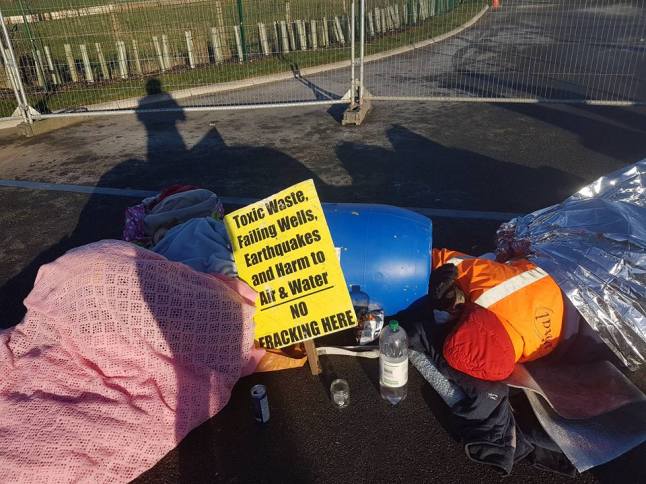 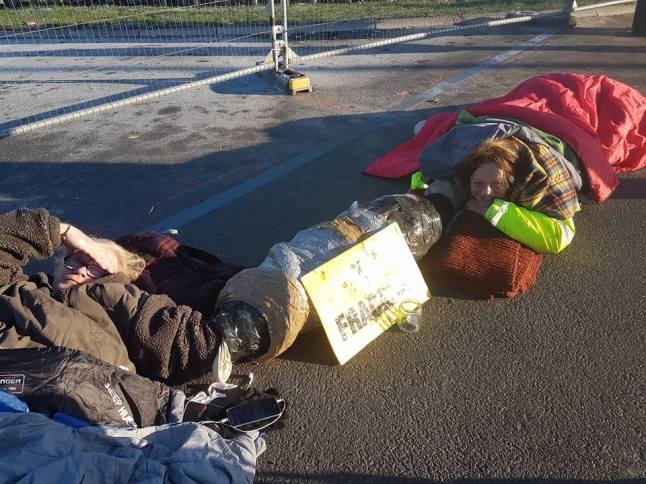