Lancashire fracking protest arrests: 2017 data shows most were in the summer and for highway obstruction

The figures show there were a total of 330 arrests during 2017 and almost all (307) resulted in charges. A majority of the arrests were during the summer.

Less than 15% were under the Public Order Act, which deals with harassment, abusive behaviour and the risk of disorder.

There is no published data on how many of the charges led to prosecutions or convictions. Lancashire Police and the Crown Prosecution Service have told DrillOrDrop they don’t have information on the outcome of charges or prosecutions arising from the Preston New Road protests.

Two-thirds of total arrests were between May and August.

July saw the largest number of arrests in a single month (29% of the 2017 total). This was when the campaign group, Reclaim the Power, coordinated a month of protests.

There were just 11 arrests and charges (3% of the 2017 total) in the final quarter of the year and no arrests in December. 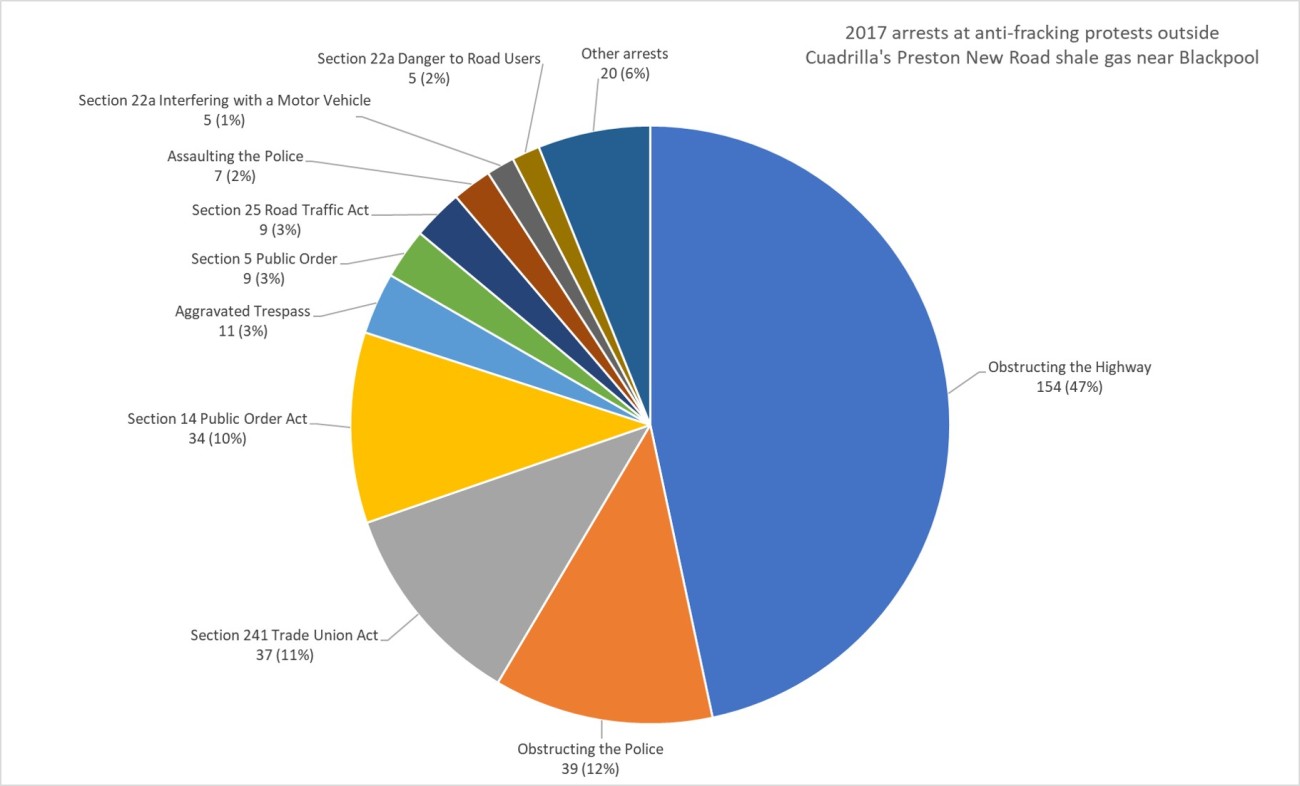 A total of 154 arrests during 2017 – 47% of the annual total – were for obstructing the highway. Arrests for this offence peaked from May to July. They made up three-quarters of the arrests in May and two-thirds of arrests in July.

Arrests for obstructing a police officer also peaked during the summer, with almost two-thirds between June and August. But these arrests were much lower, at 39 for 2017, or 12% of the total.

Police have brought prosecutions under trades union legislation against anti-fracking campaigners since the protests at Balcombe in West Sussex in 2013.

Section 241 of the Trades Union and Labour Relations (Consolidation) Act was designed to outlaw secondary picketing. It makes it an offence to compel another person to abstain from doing a legal act through violence, intimidation, following or watching their business.

There were a total of 37 arrests (11% of the total) under this legislation during 2017 at the Preston New Road protests. All but eight of them were between June and August.

During the year, some shale gas companies have accused anti-fracking campaigners of disorder, intimidation and harassment.

Of the arrests at Preston New Road protests, 45 (less than 14%) were made under the Public Order Act.

Of these, most were for alleged breaches of Section 14 of the Act. This allows police to impose conditions on a public assembly if a senior officer believes there is a risk of serious public disorder, damage or disruption.

Section 4 of the Public Order Act, which outlaws abusive or insulting behaviour saw a total of two arrests for the entire year, both in February. The data does not show whether these arrests resulted in charges, prosecutions or convictions.

There were nine arrests (less than 3% of the total) under Section 5 of the Public Order Act, which deals with harassment and causing alarm or distress. These arrests were in April, May and August. Again, the data does not show whether these arrests resulted in charges, prosecutions or convictions.

There were seven arrests for assaulting a police officer. These were across six different months. There have been no arrests under this offence since August.

Over the entire year, there were 3 arrests for breach of the peace, two for drunk and disorderly and four for criminal damage. These made up 3% of the total.

The shale gas company, INEOS, specifically outlawed the protest technique of lorry surfing – where people climb onto a vehicle – in its injunction order, confirmed at the High Court in November 2017.

According to the police data on the Preston New Road protest, there were nine arrests (3% of the total) which could apply to lorry surfing. These arrests were brought under Section 25 of the Road Traffic Act. This makes it an offence to get on a vehicle or tamper with its mechanism. These arrests were all between June and August.

There were another ten arrests under Section 22a of the Road Traffic Act. This section of the act makes it an offence to interfere with a motor vehicle or endanger road users by causing anything to be on a road.