Peter Whittick, from West Sussex, said he was acting as conscientious protector. He told his trial in Brighton:

“I strongly believe that we should be able to exercise our human rights to prevent harm to our community.”

The court heard how Dr Whittick climbed onto the lorry when it was parked at Pease Pottage Services near Crawley.

Campaigners had learned that the lorry had moved the drilling rig from an oil exploration site at Broadford Bridge in West Sussex in the early hours of 6 September last year.

Dr Whittick, who was representing himself, said this journey was in breach of planning conditions designed to prevent vehicle movements into and out of the site before 7am.

He denies he hindered the rig owner, British Drilling and Freezing Ltd, from carrying out its lawful business under section 241 of the Trades Union and Labour Relations (Consolidation) Act.

Dr Whittick, one of the first campaigners to use the defence of “conscientious protector” at a trial, said:

“I could not stand by and allow a flagrant breach of planning permission that was not being addressed by the county council.”

He said people had reported breaches of planning permission at the Broadford Bridge site:

“My concern is that if the breaches of permission we were reporting are not being acted upon it is difficult to have confidence that more serious breaches are being picked up.”

He said he also wanted to raise awareness about what he saw as the threats of onshore oil and gas developments. He said they would be a major contribution to the acceleration of climate change and would lead to industrialisation of countryside. There could be 4,000 to 6,000 oil wells across the Weald, he said.

“Not to take action in the face of such a threat would be irresponsible”. 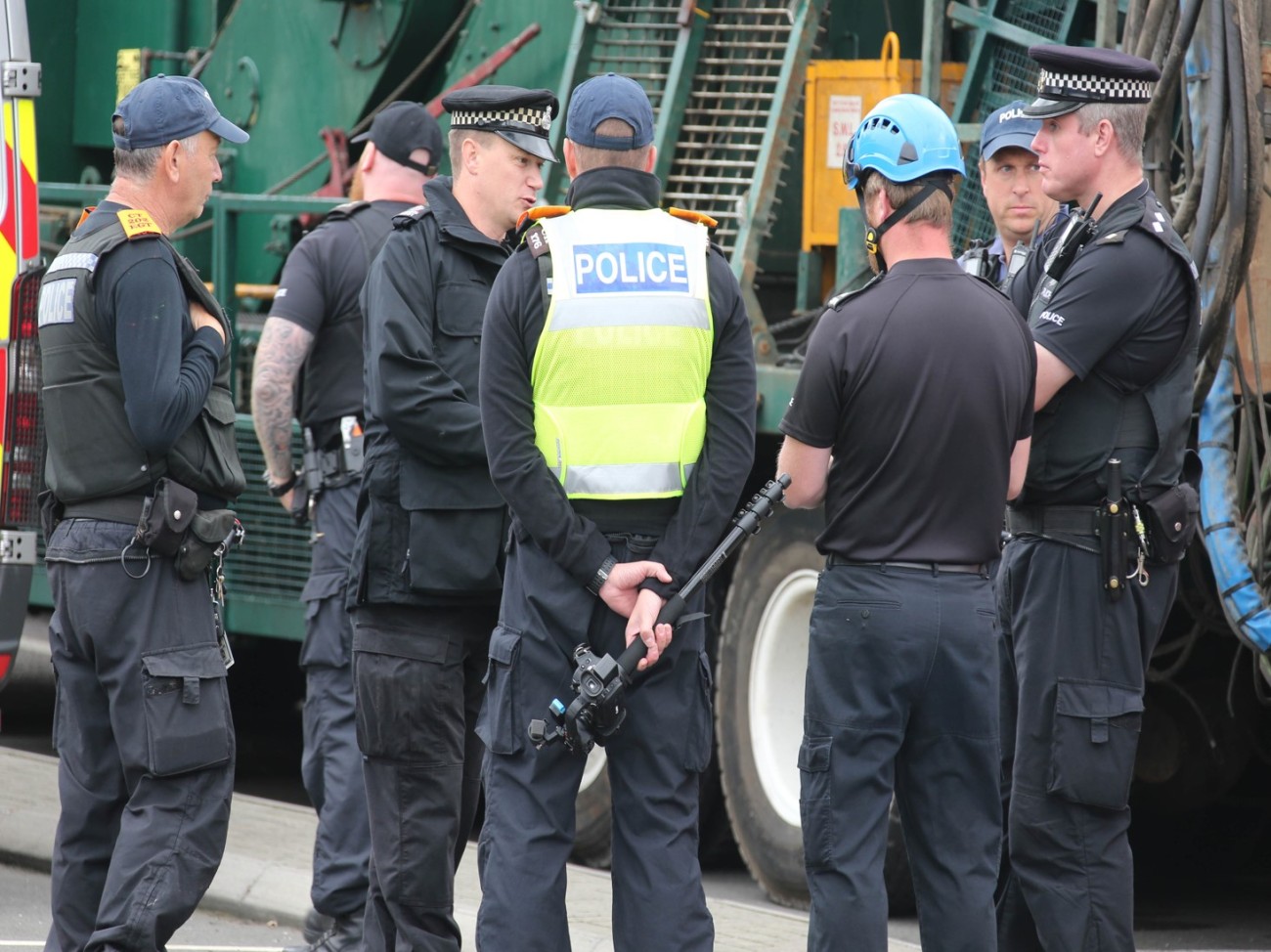 Dr Whittick said he went to the motorway services to buy some cakes and saw the rig in the car park.

“It was a remarkable coincidence”, he said

He told the court he talked to friends and other campaigners about what he should do.

“My concern was that there was a threat to the community. I wanted to raise awareness but also within me there was a deep calling that I had to take action as a matter of conscience.

“I was there by a coincidence and it had to be me that did it.”

Dr Whittick said he considered trying to “slow walk” the lorry out of the car park. But he said his experience of what he called aggressive policing at previous protests made him feel that climbing on the lorry would be safer.

“I felt I was less likely to be assaulted than if I attempted slow walking or was a legal observer.”

Dr Whittick was discovered by the lorry driver at about 2.30am on 7 Septtember 2017 and he stayed on top of the lorry until about 12 noon that day. He told the court he was waiting for the mainstream media to arrive but they didn’t come.

David Dainty, prosecuting, put it Dr Whittick that this was untrue:

“It is a reason you made up after your arrest which you did not mention on the video [of the incident] or in your police interview.”

“Your intention was to make as much delay and disruption as possible and that is why you waited until 12 noon before you climbed down.”

“If I wanted to cause maximum delay I would have gone to the end of the rig, which would have taken an hour for me to be brought down. I came down in a reasonable manner.”

The court heard that the rig was due to go to another oil site in West Sussex, at Lidsey, near Bognor Regis. The driver of the escort vehicle said he planned to leave at 3am-3.30am to make a two-hour journey.

Dr Whittick said this delivery would also have been a breach of a planning condition. Mr Dainty argued that the condition allowed for working outside those hours for assembly, operation and removal of the rig.

Mr Dainty added that if Dr Whittick’s interpretation of the condition were correct, the rig could have been delivered legally during part of his occupation of the lorry.

The court also heard from the legal observer at the protest, Kim Turner.

She said the police five-step appeal given to protesters was made “very badly” in Dr Whittick’s case. It was rushed, she said.

“Peter made it very clear. He leaned over and said ‘could you give me time to reflect’. The police officer said ‘You have had a couple of seconds’”.

“Criminalising campaigners is a travesty”

She described how people had been arrested at protests outside Broadford Bridge while complying with police instructions and then not charged.

Dr Whittick described how he had previously been charged and later acquitted of obstructing the highway. He accused the police of seeking to criminalise campaigners against the onshore oil and gas industry.

“That peaceful, well-meaning and caring people who are standing up for the environment can be criminalised in this day and age is a travesty.”

“My hope is that fracking will be banned in England. It is my belief that this will happen but in order for this to happen those people like myself and other conscientious protectors must be able to stand up and take action.”

District judge Christopher James reserved judgement in the case. He will make his judgement at a hearing on Wednesday 14 February 2018.

DrillOrDrop report from this morning’s hearing