In a brief statement to investors in the past hour, the company said:

“Equipment is being removed from the site and the company will update the market once data and test results have been assessed.”

The statement did not indicate when or if the company would return.

Earlier this month, UKOG announced that the Oil and Gas Authority had extended consent for flow testing at Broadford Bridge until the end of the month.

In February, shares in the company dropped more than 35% following the announcement of possible formation damage in the well. (DrillOrDrop report and UKOG statement)

The company said then:

“Serious consideration is being given to a possible future short sidetrack and selective re-test of KL3 and KL4 which electric logs show as oil saturated.”

The current planning permission at Broadford Bridge is for flow testing only. A spokesperson for West Sussex County Council told DrillOrDrop earlier this month:

A spokesperson for Broadford  Bridge Action Group, which opposes UKOG’s operations at the site said:

“It’s about time – they originally promised the flow testing would only last 14 weeks and be finished by Christmas. Given their shareholder announcements so far it is likely they have found very little oil. The economics of this industry don’t add up and the risk to the environment doesn’t make it worthwhile. Let’s hope investors switch to renewables for a better long term return.

“Meanwhile we will continue to monitor the restoration at Broadford Bridge, support all sites still under threat and be vigilant for any new applications.”

In this afternoon’s statement, UKOG said the focus would now shift to Horse Hill, the so-called Gatwick Gusher in Surrey. UKOG is the leading partner in the site operator, Horse Hill Developments Ltd.

In November 2017, Surrey County Council approved an application for extended flow testing and additional drilling at Horse Hill. Several planning conditions still have to be met before operations can begin.

“An extended well test of the Horse Hill-1 oil discovery will commence once all regulatory approvals are in place.” 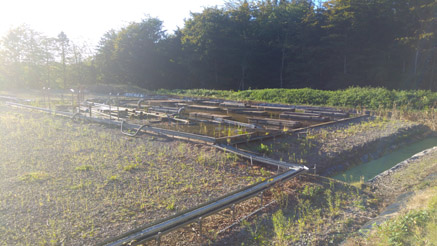 Today’s statement includes for the first time, under UKOG’s licence interests, that a “revised drilling and testing planning application” is underway at the UKOG site at Markwells Wood in the South Downs National Park.

DrillOrDrop reported last week that the national park authority had issued a Breach of Condition Notice for Markwells Wood, where there has been no planning permission in force for 18 months.

The notice ordered UKOG to remove equipment and hard standing from Markwells Wood within six months and restore it to woodland within a year.

UKOG said in November 2017 that it would submit a revised application before the end of the year but none had been published. 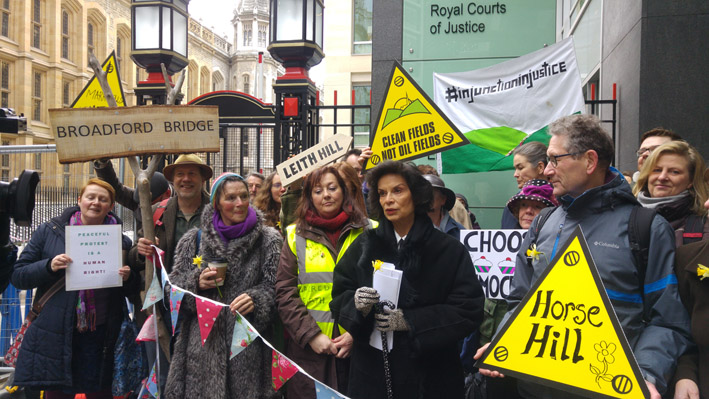 Opponents against UKOG’s injunction at the High Court on 19 March 2018. Photo: DrillOrDrop

On Monday (19 March 2018) UKOG sought an injunction at the High Court in London against protests at all three exploration sites. DrillOrDrop report

A senior court official delayed a decision on the draft order for about six weeks.

Five women from Sussex and Surrey, including the actor Sue Jameson, are challenging the injunction.

A hearing on whether their costs will be capped is due on 29 March 2018.