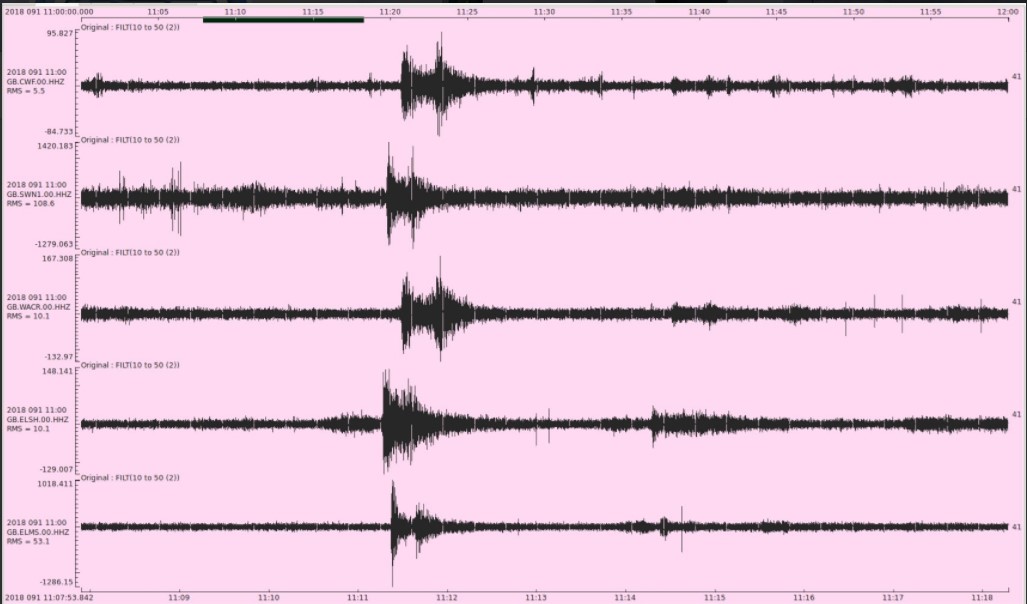 The 2.7 magnitude earthquake on 1 April was centred on the area around Newdigate, west of Horley, and felt by people living near Horse Hill.

It was seven years to the day after an earthquake in Lancashire, which was later linked to fracking by Cuadrilla.

But UKOG, the leading investor in the Horse Hill site, told DrillOrDrop this afternoon that there was no link between oil exploration and the earthquake. In a statement, the company said:

“We strongly refute the far-fetched, unscientific and malicious connection made between Horse Hill and the earthquake in Surrey on April 1st.

“There is no drilling, testing or underground works taking place at Horse Hill or at any of our sites at present. All such work at Horse Hill ceased over two years ago.”

Keith Taylor, the Green Party MEP for south east England, called this morning for a suspension of oil exploration in the area pending an official investigation. He said:

“There is an understandable concern. We need the Department for Business, Energy and Industrial Strategy and the Environment Agency to hold an urgent investigation to see what they can find.

“This is an area of the Weald that the industry has its sights on turning into an oil field. There are operations at Horse Hill, Brockham and Leith Hill and they’re within a stone’s throw [of the earthquake epicentre].

“Being a member of the European Parliament, we work on something called the precautionary principle where if there’s a demonstrable risk we ought to suspend operations in Surrey until reports from the Department of Business, Energy and Industrial Strategy and the Environment Agency have clarified the situation.”

Oil exploration across the Weald in southern England has attracted criticism for the use of acid in wellbores. Companies have argued that it is a standard oil industry technique to clean the wellbore and stimulate the flow of oil from surrounding rocks. But opponents have said it is the equivalent of “fracking under the radar”.

The site operator at Horse Hill has planning permission to use acidising in operations to test the flow of the well.

Lisa Scott, a resident living near the Horse Hill site, who felt the earthquake, supported Mr Taylor’s call for a suspension of operations. She said she was worried about possible damage to the wellbore at the site. The series of earthquakes linked to fracking by Cuadrilla near Blackpool deformed the Preese Hall well.

Ms Scott said “based on figures given in the current planning application, during the flow testing in 2016 the acid used would have travelled 12m into the formation”.

“That sounds questionable to me. I want categoric proof that there’s no risk to our homes. A lot of us have huge mortgages that we’re paying on our homes to allow us to live in this area.”

“I would like to know who would pay for damage caused to our homes if this happens and it is confirmed to be associated with the acidization of wells that is happening in this part of the country.

“I’m really worried that the government is trying to push through changes to planning guidance, which would require councils to plan positively for oil and gas drilling, when we really don’t have the geological knowledge to fully understand the risks.

“I really think there is a huge potential risk to thousands of homes in our area if well drilling and acidisation is done to the extent that the oil companies are telling their investors they intend to do, which is drilling wells back-to-back across our countryside.”

DrillOrDrop asked UKOG whether there would be any check for damage to the Horse Hill wellbore. We’ll update this report with any response from the company.

The British Geological Survey (BGS) told us it was well-known that induced earthquakes could be caused by activities including hydrocarbon exploration and production, waste disposal, mining and geothermal power generation.

Brian Baptie, a seismologist with the BGS, said:

“In the case of the magnitude 2.7 ML near Newdigate, Surrey, on 1 April, we are unable to say if this event was caused by hydrocarbon exploration or production mainly because of the uncertainties in our estimates of the earthquake epicentre and depth. We used a process a bit like triangulation to locate earthquakes and our closest monitoring station was over 70 km away, so the errors in our location estimate are several kilometres.

“I believe there is no current drilling or testing at the Horse Hill 1 site. The LR/24- 4 well was drilled in 2014 and well testing was carried out in 2016. Similarly, I believe that all oil production at the Brockham field, just south of Dorking has been conventional and there has been no hydraulic fracturing or “fracking”. We have not recorded any seismicity associated with this field in the past.

“Background levels of earthquake activity in this part of England are very low and I believe that this is the first earthquake that we have recorded in Surrey since BGS started instrumental monitoring in the 1970s.”

DrillOrDrop asked the Department of Business, Energy and Industrial Strategy and the Environment Agency whether they would investigate the earthquake.

A spokesperson for BEIS said:

“There are no current operations ongoing at the Horse Hill or Leith Hill in Surrey. As noted by British Geological Survey, there is no evidence to show a link between any oil or gas operations in the south of England and the earthquake recorded on 1st April 2018.”