Drilling at the Kiln Lane site in PEDL 181. Photo used with the author’s permission

The sale of Celtique’s share in Petroleum Exploration and Development Licences 181 and 201 leaves the company with interests in just two remaining UK areas.

According to today’s announcement, Celtique sold its 32.50% share in PEDL201, north of Loughborough on the Leicestershire-Nottinghamshire border, and the 25% interest in PEDL181 in north east Lincolnshire.

The interests are to be divided equally between Union Jack Oil and Humber Oil and Gas Ltd. Union Jack said the total purchase price was £15,000. The deal has to be approved by the Oil and Gas Authority.

Union Jack Oil already has a 10% interest in PEDL 201. An exploration well was drilled in the PEDL in 2014 at Burton on the Wolds but later plugged and the site restored. The licence operator, Egdon Resources, increased its stake to 45% in 2017. The PEDL includes the village of Widmerpool, which gives its name to the geological Widmerpool Gulf, identified by the British Geological Survey and others as a possible source of shale gas.

PEDL181 covers the northern part of the Lincolnshire Wolds in the Humber Basin. It runs east from Caistor to Grimsby and Cleethorpes. It has also seen disappointment for oil and gas companies. The operator, Europa Oil and Gas, drilled a well in 2015 at Kiln Lane. But the target sandstone formation was found to be water wet and the well was plugged and abandoned. 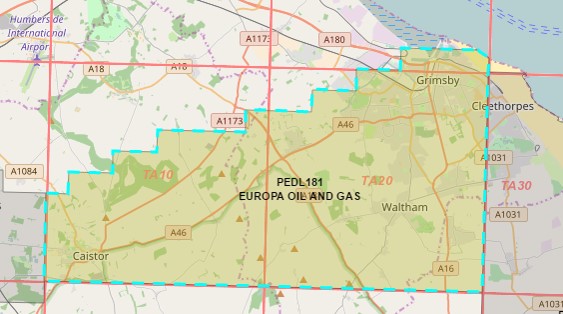 “We are delighted to have been able to make a further investment in attractive licences in the Widmerpool Gulf and Humber Basin at nominal cost, alongside our Commercial Partner, Humber Oil & Gas.

“Union Jack will hold these licences as an investment given the Board’s view that they both have significant value upside given the potential for future unconventional oil and gas exploration activities in the UK onshore.

“While further work will need to be undertaken by the onshore oil and gas industry in the UK to prove the commerciality of unconventional oil and gas projects, the transaction value ranges proposed by Edison provide an encouraging valuation indicator and supports Union Jack’s confidence that the risk/reward balance of these investments is favourable to our shareholders.”

Celtique’s remaining interest in the UK are in the adjoining licences, PEDL180 and 182 in north east Lincolnshire. They include the Wressle oil discovery, drilled by Egdon Resources near Scunthorpe in 2014 and discovered oil.  There has been no planning permission in force at the Wressle site since April 28, the date set by a planning inspector for the site to be restored. Egdon has submitted an application to extend the previous permission and is expected to apply for long-term oil production at the site.

In 2016, Celtique pulled out of PEDLs 334 and 306, issued under the 14th round in 2016. They were both in the East Midlands and Celtique’s share was assigned at no cost to other stakeholders. Details The company withdrew from three 14th round licence blocks before they were formally awarded. Another 14th round licence, awarded to Celtique, PEDL278, is no longer listed by the Oil and Gas Authority.