But details of operations at the site, including low-levels methane emissions and a small leak of fracking fluid, have been released by the regulators.

Operators are required to send a daily report while they are fracking to the Oil & Gas Authority, Environment Agency, Health and Safety Executive and energy department. It includes details of fracking stages, volume of chemicals, seismicity and well integrity.

In guidance, the industry body, UK Onshore Oil and Gas (UKOOG), said the daily report should also be “made available on the operator’s website”.

“Cuadrilla will not be publishing copies of the daily reports on its website.”

“The UKOOG document is intended as a guide to operators when public announcements are required and it is not compulsory.”

Third Energy, which had planned to frack at Kirby Misperton in North Yorkshire, said in its hydraulic fracture plan that it would put the report on its website.

There’s been huge public interest in fracking operations at the Preston New Road site, which began on 15 October 2018, particularly following a series of small earth tremors.

“We are not giving a stage by stage update on each frac”.

But details have emerged in a newsletter from the regulators and from formal reports of site visits by the Environment Agency. 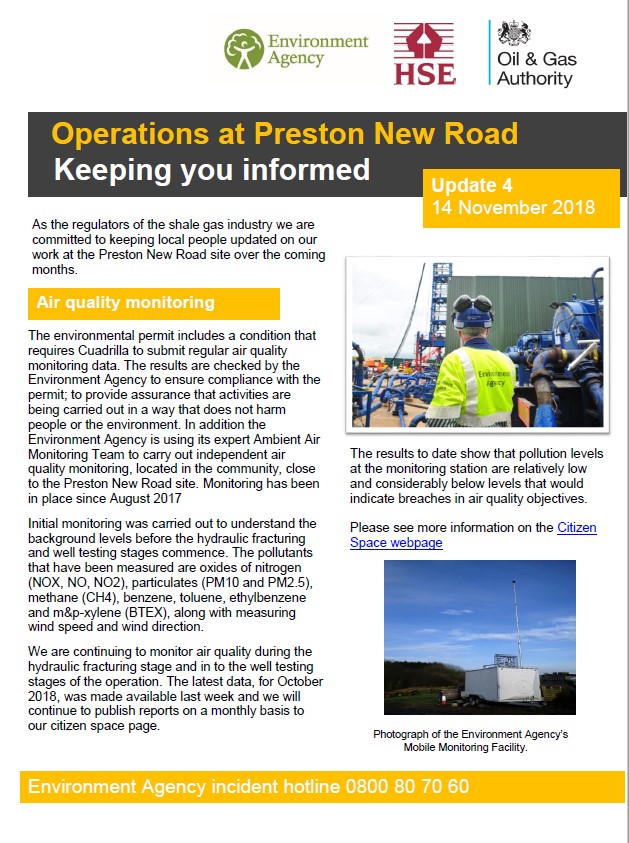 It said methane was identified during a site visit last month. The newsletter said:

“The levels (concentration of 11.74 parts per million) were very low, significantly below anything that would have an impact on human health, and lasted for a short period of time – 5 minutes.”

It said levels higher than this had been recorded during background monitoring before fracking started. The levels were not harmful to site staff or local people. But it added:

“We have assessed compliance with the sites permit and are currently working with the company to review their procedures for managing fugitive emissions from the process.”

The newsletter said a formal report would be published in early December.

Following an inspection on 17 October, the Environment Agency gave details of small leak of hydraulic fracturing fluid from a surface pipe.

The EA said this did not involve the high pressure pipework used to inject fracturing fluid into the well. The leak was fixed and the main fracturing stage  continued. The EA also pointed out:

“The surface pipework is all contained within a temporary bunded area, in addition to the main well pad liner.”

The newsletter also gave details of air quality monitoring at the site. It confirmed:

“Pollution levels are relatively low and considerably below levels that would indicate breaches in air quality objectives.”

The EA is monitoring for oxides of nitrogen (NOX, NO, NO2), particulates (PM10 and PM2.5), methane, benzene, toluene, ethylbenzene and m&p-xylene, a chemical in the BTEX group.

There were no breaches identified last week in compliance with hydraulic fracture plan, the EA said.

But it said there had been an administrative error on some waste transfer notes.

“Waste was transported and disposed of correctly in all cases. However, the notes incorrectly listed the trading name, instead of the registered waste carrier’s name. Advice and guidance has been provided to Cuadrilla.”

DrillOrDrop  understands that there has been no fracking at Preston New Road since 2 November 2018.

We are compiling information from the EA’s site inspection reports and adding them to the Tremor tracker. Here’s the first instalment:

16:05-17:40
Main frack using 296.7m3 of slickwater with proppant. Flow back volume of 24.9m3 stored for reuse. Microseismic events plotted from the mini and main frac stage showed events plotting below the lateral section of the well to a depth of 96.8m and laterally to a length of 191.5m. No induced seismicity noted and no breach of sub-surface permit boundary.

13:00
Mini-frac at Stage 1 of PNR1z well. Lasted for five minutes. No proppant was used during this mini-frack. 1.87m3 was pumped into the formation. Purpose was to measure the pressure in the shale formation when injected with hydraulic fracturing fluid. A further 15m3 mini-frac was not conducted. No microseismic events detected beyond the permit boundary.