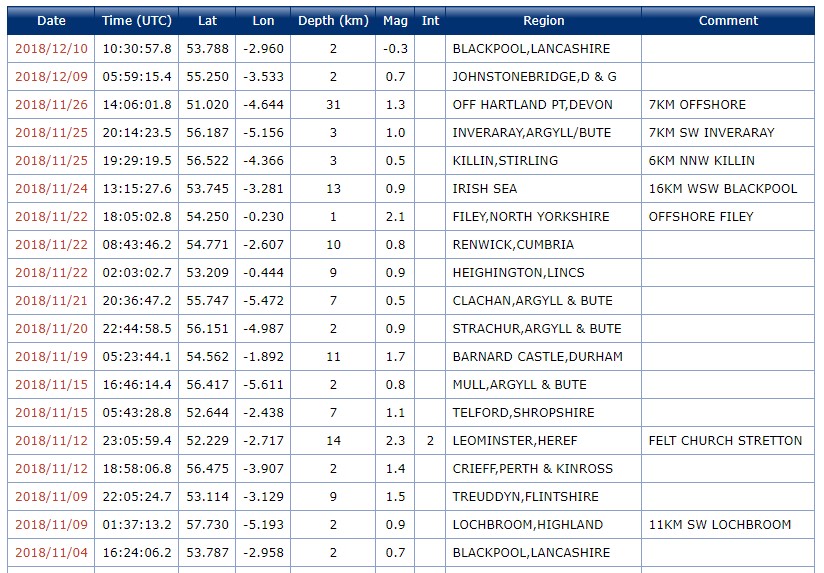 Extract from the British Geological Survey record of seismic activity.

Cuadrilla confirmed this morning it had resumed fracking after a tiny tremor was recorded near its Preston New Road fracking site.

The British Geological Survey reported a micro-seismic event, measuring -0.3 on the local magnitude (ML) scale at 10.30am today. This is the first since the most recent tremor on 4 November 2018.

Cuadrilla said in a statement:

Cuadrilla had completed its daily hydraulic fracturing operations at the time. The micro seismic event, registering a minus on the Richter Scale, was detected by our sophisticated monitoring system and verified by the British Geological Survey (BGS).

“According to recent studies by the University of Liverpool, the ground motion experienced from a -0.3ML event is similar to a bus passing on the opposite side of the road or a mobile phone on vibrate. This level is clearly way, way below anything that can be felt at surface and is a very long way indeed from anything which could cause harm or damage.

“Cuadrilla will continue with operational activity in line with its hydraulic fracture plan.” 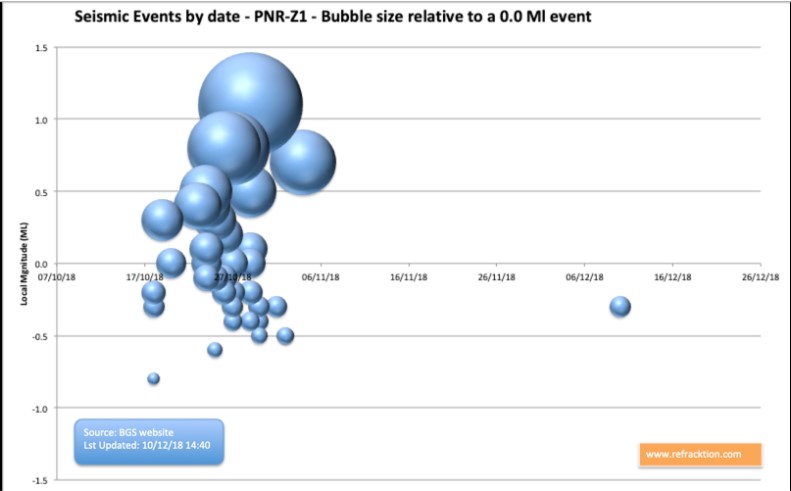 Today’s activity brings to 37 the number of seismic events near Preston New Road since the first on 18 October 2018. That followed three days of fracking at the site.

But they increased in size during October and on three occasions Cuadrilla said it had stopped fracking operations.

The largest event, at 1.1ML on 29 October 2018, happened during fracking. This counted as a red event because it measured more than 0.5ML. Under the regulations, fracking must pause for 18 hours. Another red event, measuring 0.8ML, was recorded on 26 October 2018.

The BGS also reported four tremors, which are defined under the regulations as trailing events. These measured 0.5ML or above but happened when Cuadrilla was not fracking.

One of Cuadrilla’s partners, said last month Cuadrilla would seek to raise the threshold at which fracking must pause.

The Australian mining group, A J Lucas, also told shareholders Cuadrilla would allow more fluid to come back to the surface after fracking in an attempt to tackle the problem of earth tremors.