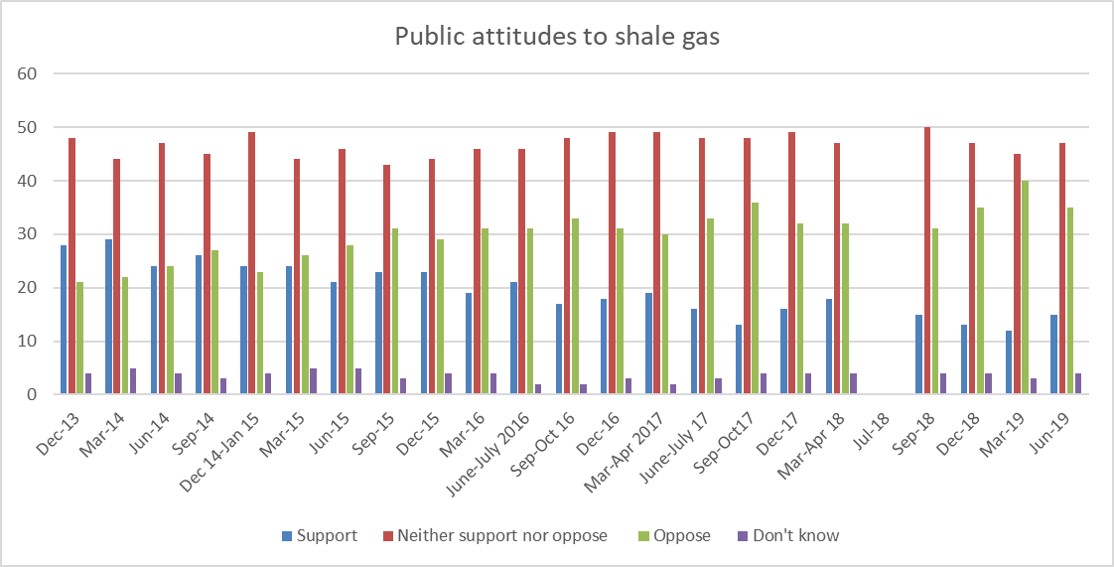 The quarterly Wave tracker survey showed levels of support returned to 15%, last reached in September 2018. But the proportion of people who support fracking remains at less than half those who oppose. 47% neither support nor oppose.

The survey, for the Department of Business, Energy and Industrial Strategy (BEIS), was conducted in June 2019 when no fracking was being carried out in the UK. It was before Cuadrilla announced it was returning to frack at Preston New Road, near Blackpool, and before Aurora Energy Resources said it would be submitting plans to frack at Altcar Moss near Formby.

Why do people support fracking?

Supporters of fracking interviewed for this survey appeared to be less influenced by industry arguments that UK shale gas would reduce dependence on other fossil fuels and energy from other countries. Both these reasons for support fell.

But the argument that fracking would have a positive impact on climate change appears to have had some traction. The proportion giving this reason for supporting fracking rose in the latest survey.

According to the latest results, 35% of participants opposed fracking, down from the record of 40% in March 2019. The level of opposition is now back to that reached in December 2018.

As in previous surveys, the results found that opposition was higher among people who knew more about fracking and lived where there were licences to explore for shale gas.

Among people who said they knew a lot or a little about fracking, 49% said they opposed it, compared with 18% who supported.

Opposition toward fracking was also higher among people:

Why do people oppose fracking?

The latest figures indicate less concern about the risk of earthquakes compared with the previous survey but more about the loss or destruction of the natural environment. There was also an increase in the proportion of people saying they opposed fracking for reasons about climate change and other sources of energy.

47% of participants neither supported nor opposed fracking. This was 2 points up on the previous survey and back to levels last seen in December 2018.

4% said they did not know whether they supported or opposed, up 1 point on the previous survey.

Of the people who said they knew less about fracking, 77%  neither supported nor opposed it. Among this group, support was 10% and opposition was 13%.

78% of participants were aware of fracking for shale gas. This was unchanged on the previous two surveys.

BEIS said awareness of fracking was highest among:

Data for the survey, Wave 30, were collected from 5-16 June using face-to-face in-home interviews with a representative sample of 4,231 adults (aged 16 and over) in the UK. Interviews were carried out using the Kantar UK Omnibus, which uses a random location quota sampling method.