The application for a hazardous substances consent has been submitted to East Riding of Yorkshire Council.

If granted, the consent would allow Rathlin to store up to 199 tonnes of crude oil in three tanks at the site.

Rathlin Energy drilled a second well at West Newton in spring 2019, reaching a depth of 2,061m. In June 2019, one of the partners in the operation described the site as “potentially the UK’s largest hydrocarbon discovery since 1973”.

Preparations are now underway to test the flow of oil and gas. Testing is expected to take 4-8 weeks, with work carried out 24-hours-a-day. 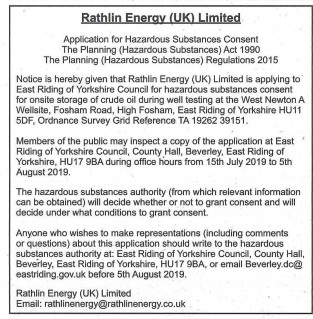 Under the regulations, a hazardous substances consent is needed for storage of oil weighing more than 50 tonnes.

According to the application details, validated last week, Rathlin wants to be able to heat any oil produced by the test to separate it from wellbore fluids. There would then be a three-phase process to separate oil, gas and produced water.

The separated produced water and crude oil would be diverted to individual storage tanks on the site. Any gas would be burned in a flare.

Crude oil would be transported daily by road tanker to a refinery. The application indicated that there would be four vehicles visiting the site each day, with a total load of about 78 tonnes.

“The worst-case foreseeable accident has been identified as a major fire leading to Boiling Liquid Expanding Vapour Explosion”.

Fires would generate “great volumes of smoke” and “deposition of particulates” on the ground and homes, the company said.

“The potential to significantly harm offsite receptors and populations has been assessed as low.”

The application says the nearest homes or businesses were between 530m and 670m from the well site.

East Riding of Yorkshire Council said it aimed to make a decision on the application by 11 September 2019. The deadline for comments has been set at 15 August 2019.

The Environment Agency said it had no concerns with the proposal “at this stage”. The Health and Safety Executive said it may need 13 weeks to respond fully to the application.

There are online responses from two members of the public: one in favour and one against.

“Based on the analysis of the data gathered while drilling, it is uncertain whether the well may flow oil or gas, or a combination of both. Furthermore, the composition of the hydrocarbons would need to be determined during the well test.

“Given the uncertainty of the hydrocarbon composition, and to ensure that Rathlin has the appropriate consents in place, an application has been submitted to East Riding of Yorkshire Council for a Hazardous Substances Consent which would allow for the storage of up to 199 tonnes of crude oil which falls in category P5b [flammable liquids].”

Rathlin would need to make a separate planning application for long-term oil production after the well test.