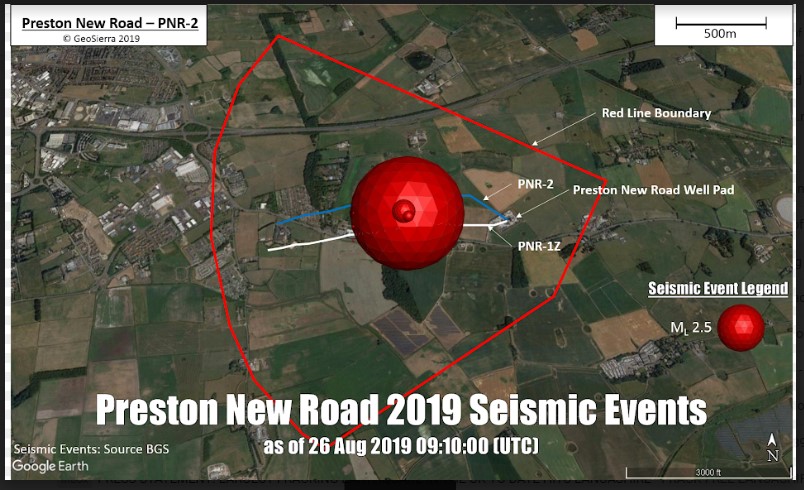 The UK’s largest fracking induced earth tremor, measuring 2.9ML, was felt across Lancashire at 8.31am today.

It was the latest in more than 90 tremors induced by fracking at Preston New Road since 15 August 2019, including four that were felt.

The tremors were predicted earlier this month by Grant Hocking, the founder and president of the US energy and environmental company, GeoSierra, which has reviewed previous Cuadrilla fracks at Preston New Road and at Preese Hall.

He warned in emails to Cuadrilla, the Oil & Gas Authority (OGA), the British Geological Survey (BGS) and the Environment Agency (EA) that there were likely to be tremors when the second Preston New Road well was fracked this month.

This morning, people living as far from the site as Preston and Chorley said they felt the the 2.9ML tremor. Six other tremors, each measuring more than 0.5ML, have been recorded in the past five days.

Cuadrilla attributed tremors at Preston New Road during autumn 2018 to the activation of a fault intersected by hydraulic-induced vertical fractures, oriented in the direction of the maximum horizontal principal stress.

But a different cause has been suggested by Dr Hocking, who has written scientific papers and worked with Haliburton on hydraulic fracturing innovative field trials and co-owns related patents.

He said there was evidence that Cuadrilla’s hydraulic fracturing operations at Preston New Road had opened near-horizontal, highly sensitive, slicken-sided bedding planes. These are smooth, highly polished surfaces, often with parallel grooves. They form at fault planes when rocks on either side slide past each other.

“Rather than hydraulic fracture the shale formation, Cuadrilla have opened near horizontal bedding planes creating a heightened risk of induced seismicity, as the frack fluids have migrated about 750m updip on these hyper-stress sensitive slicken-sided bedding planes”.

He said the presence of these slicken-sided bedding planes would limit the vertical growth of hydraulic fractures, raising the bottom hole pressure and allowing frack fluids to migrate significant distances from the well.

“This heightened risk of induced seismicity can be avoided by placing limits on bottom hole pressures during injection”, he warned the regulators this month but none responded. He said:

“We were being proactive in warning Cuadrilla and the regulators of the induced seismicity risks associated with excessive bottom hole pressures and the consequences of opening the slicken-sided bedding planes.”

GeoSierra has made a short video about its hypothesis:

Dr Hocking had previously warned the BGS and OGA in August and October 2018 about slicken-sided bedding planes, which had also been encountered in the Preese Hall well, Dr Hocking said.

Fracking at Preese Hall in 2011 induced a 2.3ML tremor, which led to a moratorium on fracking. This was lifted in 2012 with the introduction of the traffic light system regulations. They require a pause in fracking for 18 hours if tremors during fracking reached 0.5ML.

Dr Hocking warned the organisations in August and October 2018, that if the slicken-sided bedding planes were present at Preston New Road:

“without bottom hole pressure and tiltmeter monitoring, there is a high probability of repeating what happened in 2011.”

The OGA “noted” his comments.

Dr Hocking said the use of tiltmeters would provide more information on what was happening below the surface.

A government document on fracking from 2013 said

“until the characteristics of fracking in a particular formation are well established …. tiltmeters and a permanent buried seismometer system will record the usual micro-seismic events (of magnitude much less than ML 0.5) that accompany all fracking activity.”

DrillOrDrop asked Cuadrilla whether it had used tiltmeters in the two wells at Preston New Road and how bottom hole pressure was monitored. A company spokesperson said:

“This isn’t something we’re able to facilitate at the moment”.

Cuadrilla’s technical director, Sau-Wai Wong suggested that GeoSierra had misinterpreted some of Cuadrilla’s data and the general fracking process. But Dr Hocking said:

“I consider it absolutely mandatory that the UK agencies act on what GeoSierra has been trying to get across to them, on the unnecessary hazards being imposed on the public and the environment, by ill-conceived and technically incompetent design of hydraulic fracturing operations at Preston New Road.

“Surely isn’t it about time the UK government put some scientific oversight into this operation?

“From the discussions I have had with Cuadrilla, it was apparent that the company does not have a plan on how to tackle the slicken-sided bedding planes.”

Updated 1 September 2019 to include video