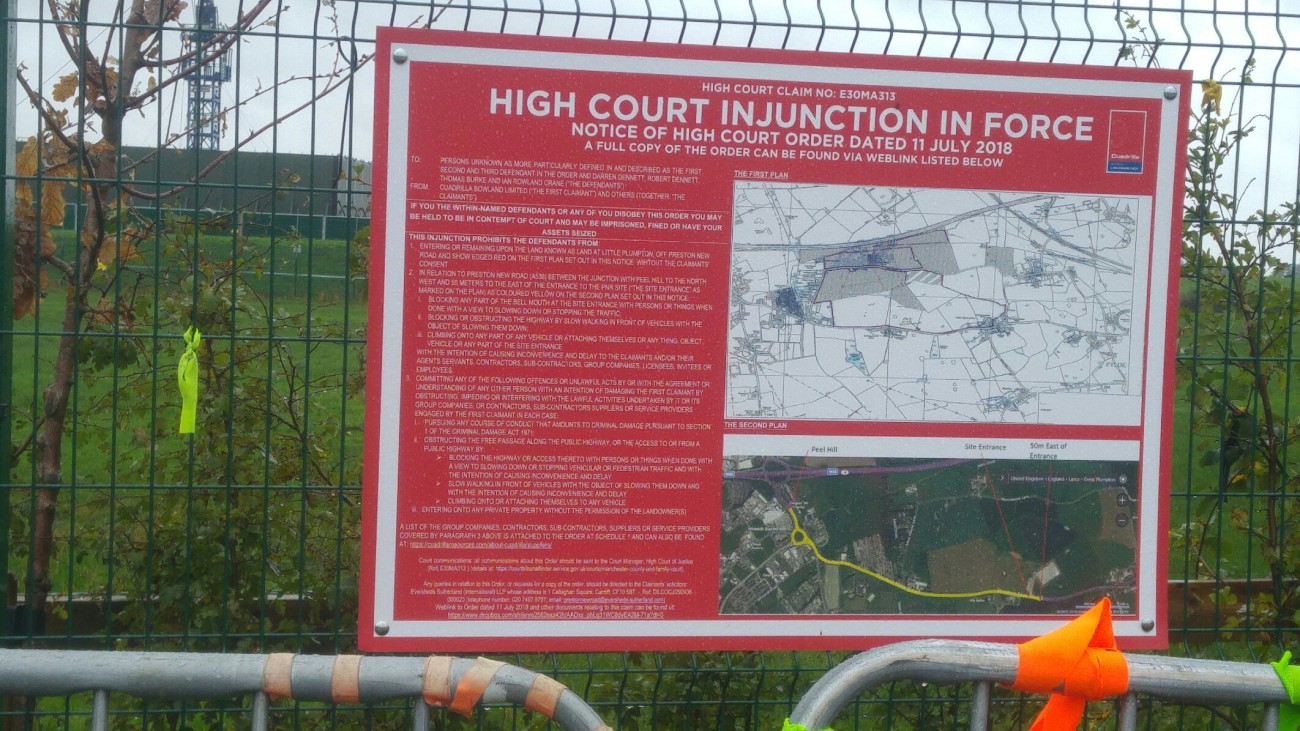 Three campaigners are challenging the ruling that they breached the injunction in force at Cuadrilla’s Preston New Road site. They are also appealing against the suspended prison sentences they received.

At a hearing at the Court of Appeal in London today, Kirsty Brimelow QC for the three said the injunction order granted to Cuadrilla was unclear and uncertain. She said:

“There should not have been a committal on an unclear order.

“It should not have been used to commit protesters for contempt of court.”

The case dates back to July 2018 when Katrina Lawrie, Christopher Wilson and Lee Walsh locked their arms inside tubes in a protest in the Preston New Road site entrance.

Almost a year later, in the first case of its kind in the UK, Mr Justice Pelling QC ruled that they had breached the injunction granted to the fracking company.

All three campaigners had been acquitted at the magistrates’ court of the criminal offence of obstructing the highway in the lock-on protest.

Ms Brimelow said the Cuadrilla injunction was having a chilling effect on protest.

“These are people who are not used to the court environment. It is stressful and it is difficult. The court should not underestimate the impact it has on ordinary citizens.”

She said the civil law of injunctions should focus on private trespass.

“It is simply too uncertain to try to tackle potential obstruction of the highway. That should be the place of the criminal law.

“These are complex issues that should not find themselves within a civil order and they should not be applicable in an order that has that amount of ambiguity to it.”

Ms Brimelow described Judge Pelling’s sentences as “manifestly excessive”. She said no penalty or sanction should have been applied in this case.

Judge Pelling had failed to pay “proper attention” to the sanctions that would be used in the criminal courts, she said.

There the maximum penalty for obstructing the highway is a £1,000 fine. People who are convicted in protest cases are often given conditional discharges.

Ms Brimelow also contested Judge Pelling’s view that he did not need to consider the issue of proportionality when making the sentence. He said this had been considered during the granting of the order.

Changes to the order

The court also heard that the injunction order used to convict the three for contempt of court included an “intention to damage” Cuadrilla. This was undesirable, Ms Brimelow argued.

Since the committal, the word “intention” was removed from the order and replaced with “having the effect of damaging” Cuadrilla, Ms Brimelow said.

The change followed the successful challenge in the Court of Appeal earlier this year by campaigners against sections of a similar injunction granted to Ineos. Judges in that appeal had ruled that two sections of the Ineos injunction were unlawful and ordered the company to return to the High Court to examine whether two other aspects were lawful.

Tom Roscoe QC for the company gave evidence of protests which, he said, justified the injunction.

Lord Justice Underhill asked whether an uncertain order may deter people from doing things they were legally entitled to do so.

Mr Roscoe said drafting attempted to avoid uncertainty. Orders that were too wide were unworkable, he said.

But he added than an uncertain order was no reason not to commit people for breaching an injunction.

He said the words “intention to damage” in the Cuadrilla order could have been left out of the order because it included examples of obstruction and inconvenience to Cuadrilla.

The hearing is listed for two days and is expected to continue tomorrow (11 December 2019). The proceedings have been live streamed.