Tanker crossing onto opposite carriageway to enter Horse Hill site. Photo: Used with the owner’s consent

The “stay in lane” policy is a key ruling in the transport and traffic management plan for the site, submitted recently by the main investor, UK Oil & Gas plc (UKOG).

Opponents of operations at Horse Hill have said many heavy goods vehicles (HGVs) delivering to the site crossed the central line and were a potential hazard to other road users.

Some say it is not possible for an HGV to enter the site without crossing onto the other carriageway.

UKOG requires HGVs to approach Horse Hill from the south. Video and still photographs have recorded how HGVs swing out onto the opposite carriageway.

My thats a Big One! pic.twitter.com/KtKXOsabx5

UKOG said it had evidence to show that “large HGV movements will no longer be required to swing out into the opposite carriageway to access the site”.

It said it had commissioned consultants to carry out a swept path analysis – a calculation of the movement and path of different parts of a vehicle when it does a turning manoeuvre. 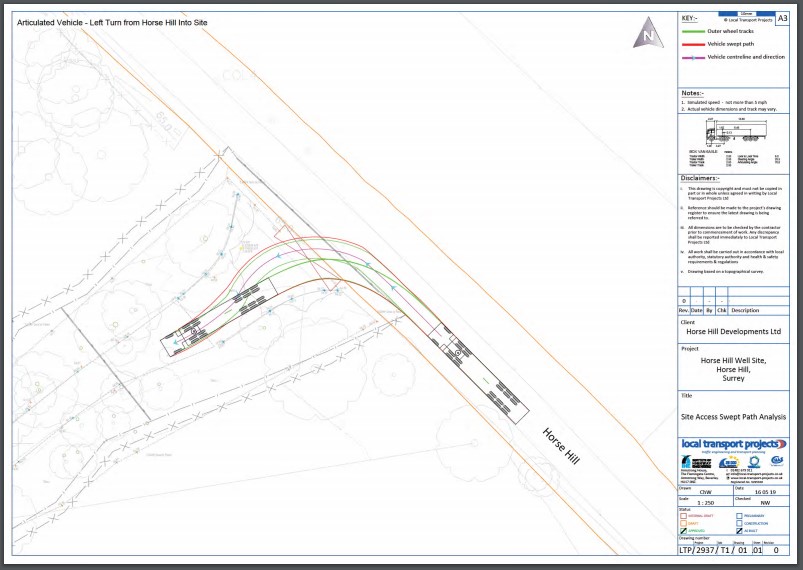 “the [site] access can accommodate a 16.5m articulated vehicle  turning into the site without requiring both sides of the carriageway to do so  (swing out)”.

Surrey County Council must approve the traffic management plan before UKOG can begin long-term oil production at Horse Hill. The approved plan was a condition of the planning permission granted in September 2019, which also allowed for drilling four extra production wells at Horse Hill.

Opponents of operations at the site have previously walked in front of vehicles, climbed on top of lorries and locked themselves together in front of the entrance.

UKOG said the contingency measures would prevent vehicles queuing on the road outside the site and back to the junction with the A217.

The plan proposed HGV holding areas in local lorry parks, where vehicles could wait to be called to the well site.

There could also be traffic controls at the A217 junction so that site vehicles would not have to give way, the plan suggested.