We need health warning labels on points of sale of fossil fuels. An opinion column in the British Medical Journal explains how fossil fuel labelling at petrol stations, and on energy bills and airline tickets could increase awareness of climate change.

Barclays sets net zero carbon target for 2050 after investor pressure. The Guardian and FT are among outlets to report that Barclays has bowed to investor pressure over its climate track record and announced plans to shrink its carbon footprint to net zero by 2050. Last year, the bank sold Third Energy to York Energy the affiliate of a US company.

Oil industry facing historic production shutdown. The FTreports that oil demand is now down by a quarter (25m barrels a day) or close to what Opec countries produce daily. Storage facilities will soon be overwhelmed unless the industry can find a way to cut output at a scale never managed before. The paper says onshore North American shale producers will be hit badly. Thousands of planned wells are predicted to be cancelled. 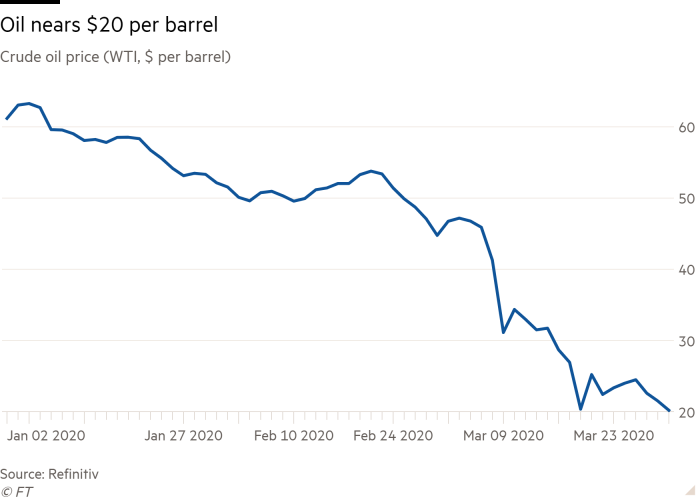 Oil price falls below US$20 a barrel, its lowest since 2002. CBC reports the price of West Texas Intermediate, the benchmark price for North American oil, dipped below US$20 on Monday morning. At one point, it was changing hands for $19.92. Oil from Canada’s oil sands – Western Canada Select – was down to $3.82 a barrel, the lowest price for that type of crude on record.

Bravado, dread and denial as oil price collapse hits the American fracking heartland. The Washington Post reports from North Dakota on the impact of coronavirus and oil policy in Saudi Arabia and Russia on demand for oil in the Bakken formation.

UK chemicals firm plans to build two hand sanitiser factories in 10 days. The Guardian(and others) report that Ineos aims to produce a million bottles of hand sanitiser a month from two factories at Newton Aycliffe and in Germany. The company is said to be talks with the NHS on supplying the products free to hospitals.

Oil industry faces biggest crisis in 100 years.  The FT reports the oil industry is facing up to the fact that fuel demand is going to fall faster than ever before. Prices have roughly halved since the start of the month with airlines grounded and millions of commuters working from home, the paper says. It predicts that 10-25% of global consumption could vanish in the coming few months.

Frack Free Isle of Wight calls for UKOG application for oil exploration at Arreton to be deferred because of the covid-19 crisis. DrillOrDrop report

IGas delays results. IGas announces it will observe a moratorium from the Financial Conduct Authority on the publication of preliminary financial statements of two weeks.

A J Lucas shares fall to new low. The majority investor in Cuadrilla Resources, the Australian mining group, A J Lucas, saw shares fall to a one year low to 0.006 cents.

Wressle production will “break even at $17 a barrel” – operator. DrillOrDrop report

Oil collapses by another 24% to $20. It hasn’t been this low since 2002. CNN Business reports oil is now facing its weakest price since the first term of President George W Bush.

Planners oppose oil test plans at Balcombe: “not in public interest” and “not appropriate to area”. DrillOrDrop report, Morning Star (17/3/2020)

Coronavirus poses threat to climate action, says watchdog. The Guardian reports comments by the International Energy Agency that the economic fallout of Covid-19 could cap fossil fuel emissions by wiping out the world’s demand growth for oil. But it could also slow the world’s clean energy transition unless government use green investments to support economic growth. See also Business Green

Oil falls 7% after Trump surprises with travel curbs. Reuters reports that Brent crude fell 7% after President Trump restricted travel to the US from Europe.

Fuel duty freeze has increased UK CO2 emissions by up to 5%. Analysis by Carbon Briefreveals that the freeze in fuel duty since 2010 means UK CO2 emissions are as much as 5% higher than they would have been.

Only five shale drillers are still profitable at $31 oil. OilPrice.com reports that most shale oil wells are unprofitable at current oil prices, Rystad Energy has warned. Only Exxon, Chevron, Occidental and Crownquest can drill new wells at a profit at $31 a barrel.

Trump administration expected to seek aid for shale companies hit by oil rout. CNBC reports that President Trump is likely to seek a federal aid package for struggling US producers.

Shale’s new reality: almost all wells drilled now lose money. Bloomberg reports that more than 100 producers can’t make a profit with oil at $31 and the shale sector has seen investors flee thanks to paltry returns.

Oil suffers rout after Saudi Arabia fires first shot of price war. Reuters reports oil prices were set for their biggest daily route since the first Gulf War after Saudi Arabia cut its official prices on a market already reeling from the impact of the coronavirus on global demand. Energy Voice

Lower carbon petrol at UK pumps to target emissions. BBC News and others reports that the government is consulting on making E10 petrol – which contains less carbon and more ethanol – the new standard petrol grade. The move could cut CO2 emissions from transport by 750,000 tonnes per year, the Department of Transport said.

Police officers hunting for environmental activists in Perth after Barclays bank shut down in climate emergency protest. The Daily Record reports on a police appeal for information

Analysis: Tories received £1.5m from polluting industries and funders of climate denial since general election. DesmogUKreports on gifts published by the Electoral Commission to the Conservative Party. They include £20,000 from a company that produces steel for North Sea oil rigs. The majority came JCB, which made two donations of £700,000 since the election. The home secretary, Priti Patel, received £21,000 fro current or past backers of the Global Warming Policy Foundation.

A flaring tax can end this wasteful and damaging practice.  Jason Bordoff, of the Centre on Global Energy Policy and Columbia University, writing in the FT, says US oil companies have burned billions of dollars worth of gas each year in the past decade. Because the oil is so valuable it is often cheaper to burn the gas than build the infrastructure to sell it. Flaring should be penalised to change behaviour, he says.

UK CO2 emissions have fallen 29% over the past decade. Analysis by Carbon Brief finds that UK CO2 emissions fell by 2.9% in 2019, bring the total reduction since 2010 to 29%, even though the economy grew by a fifth.

Climate strikers: Open letter to EU leaders on why their new climate law is “surrender“. Carbon Brief publishes an open letter from 34 youth climate activists, including Greta Thunberg, on the proposed EU climate law, to be released on 4 March 2020.

EU member states call for 2030 climate target. The Guardian reports that 12 EU member states have called for an EU climate target for 2030 to be drawn up as soon as possible. A letter from the members, including Denmark, France, Italy, Spain and the Netherlands, says the action is needed to galvanise the rest of the world before the COP 26 climate talks in Glasgow in November 2020.

Cash-strapped US shale producers pray for Opec aid. The FT reports that hopes are rising that the oil cartel will decide on deeper output cuts to support the market hit by coronavirus

Climate change deaths acted out in Glasgow Council. Friends of the Earth Scotland reports that activists staged a protest inside Glasgow City Chambers to call attention to the council’s pension fund investment in companies such as BP and Shell

Energy’s stranded assets are a cause of financial stability concern. Patrick Jenkins in the FT reports that coal mines, oilfields and gas reserves look a bad bet in an unsustainably warming world.

Look beyond European oil majors steps to net zero. Nick Butler in the FTreports that climate change targets to be net zero carbon by 2050 are good but celebration at this stage is misplaced. He says none of the big six have spelt how exactly how they are going to do but he says they are moving “beyond petroleum”.

March 2020 diary. DrillOrDrop listing of events about the UK onshore oil and gas industry and campaigns about it.

Shale drillers need a miracle to keep production from falling. OilPrice.com reports that the US shale patch is retrenching across six of the seven major plays.