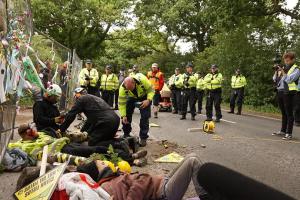 Judge Tim Pattinson has just ruled that Caroline Lucas and four other environmental campaigners are not guilty of obstructing the highway. This means that all five campaigners were cleared on all the offence against them, arising from the anti-fracking protests at Balcombe last summer.