Our round-up of reaction to this morning’s recommendation by Lancashire County Council planners to reject Cuadrilla’s planning applications for fracking at two sites in the Fylde. Statements from: Cuadrilla Friends of the Earth and Greenpeace Fylde anti-fracking campaign group Industry representatives Government

Who is wining the fracking argument?

Two discussions of the shale industry yesterday revealed very different views on the fight for public acceptance. The All Party Parliamentary Group on Unconventional Oil and Gas, meeting in Westminster, heard claims from government and industry representatives that they were winning the argument over fracking. But speakers at […]

The rate of onshore oil and gas drilling in the UK is “glacially slow”, the organisation representing the fracking industry said yesterday.

The government is planning to review rules designed to reduce the risk of earthquakes from fracking operations, a civil servant said this morning.

The government has appointed Professor John Loughhead, head of the UK Energy Research Centre, as the new Chief Scientific Advisor to the Department of Energy and Climate Change. He replaces Sir David MacKay.

Environmental campaigners and Scotland’s energy minister have criticised the government for ignoring opposition and going ahead with plans to change the trespass laws in favour of shale gas drilling. An industry group said the decision would pave the way for shale gas development in the UK. 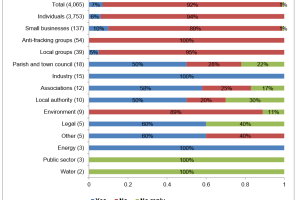 Change to trespass law on track for drillers, despite 99% opposition

The government is going ahead with plans to change the trespass law to give underground access to oil and gas drilling companies, despite more than 40,000 objections.

Drilling in the SE – the state of play

Celtique Energie’s chief executive Geoff Davies said last week it appeared that oil and gas operators were being “deliberately prevented from exploring in south east England”. He was responding to the refusal of his company’s planning application to drill an exploratory oil well at Fernhurst in the South […]