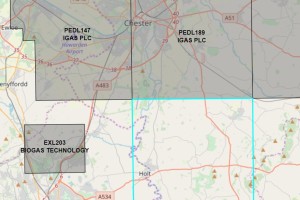 IGas pulls out of Cheshire licence

IGas has given up an exploration licence south of Chester.