“Strong forces in Whitehall” want to take planning decisions about fracking away from local authorities, councillors in Lancashire have been warned.

During a county council meeting last week, members were advised there was a “real danger” that they could lose control over shale gas planning. The council should be very careful not to give the government a reason to take over decision-making powers, the meeting heard. 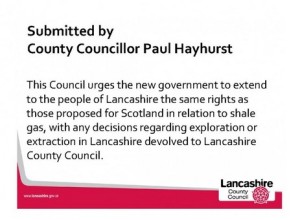 The comments came in a debate on a motion which called for the devolution of shale gas licensing to Lancashire.

The motion was put forward by two independent county councillors who represent the Fylde district, where Cuadrilla has applied for permission to frack up to eight wells.

Decisions on those applications will be made by Lancashire County Council’s development control committee next month.

But during discussions, the deputy leader of the councillor, David Borrow, warned:

“There are strong forces in Whitehall who would like to take the planning function when it comes to shale gas away from Lancashire County Council.

“How we conduct ourselves as a council, and the fact that we show we can do the job properly, focussing on the planning regulations and guidance, and conduct ourselves very carefully, is absolutely vital. The danger for the people of Lancashire of us losing control through our own planning processes of the whole planning around this is very real”, Cllr Borrow said.

“If we carried this [motion] as a council it would give them something to beat us with. I think it is absolutely crucial that we do the job around the planning, about these applications, in a professional and proper manner, and don’t gives those who’d like to take that responsibility away from us any power to do it.”

But the Green Party’s Gina Dowding, accused councillors of using weasel words and urged them to support the motion.

“It is clear that the people of Lancashire want this council to do something that will give them more control over their very, very, real concerns about pollution effects, health effects and, of course, the climate change impacts of shale gas. This motion offers this council an opportunity to give a voice once more to the people of Lancashire across the board who have very, very, serious concerns. This is a test case in Lancashire.

“People are at the end of the road, asking their elected representatives, ‘Please find a voice against this industry’, which will change the face of Lancashire, change the face of England. And all we’re hearing here is weasel words about technicalities and comparisons.”

Cllr Dowding said the council had agreed unanimously in 2012 to a motion calling for industry-specific regulation.

“It hasn’t happened”, she said. “It is really important that councillors actually stick their neck out. It is time to be bold because by the time of our next full council it may well be too late.”

David Howarth, Lib Dem, a member of the Development Control Committee, said Cuadrilla’s applications must be decided on planning rules.

“If we don’t do that and we don’t get it right, there will be a severe financial penalty for this council.”

“We must be very, very careful about what we decide and why we decide it at Development Control. I think, with regard to the wider issue of taking on those people who wish to pursue this industry in our back garden, we need to make sure that we campaign on a national level to explain the dangers and the concerns that we have as Lancastrians.”

Liz Oades, Independent, Fylde East, who seconded the motion, said local communities were “upset and irritated by fracking”. She said: “Their wishes deserve to be taken account and their support is important”,

“Local communit8ies should be put in charge of their own neighbourhoods”.

The motion’s author, Paul Hayhurst, Independent, Fylde West, said decisions should be made in Lancashire, not by the government.

“We are in a situation at the moment where we have the anti-frackers contacting us daily, telling us that Armageddon is just round the corner locally. If it is going to have an effect on our lives then we should know what effect it is and we should also know whether it is to our advantage or not and make that decision.”

“Surely would it not be a message to the government that we want devolution of this important issue in our county? Surely we shouldn’t just be lying back and saying “Well you might take it off us so therefore we won’t do anything about it”. Surely we’ve got to stand up for the people of Lancashire, we’ve got to show leadership and direction to those people.”

Lancashire County Council webcast of the meeting (starts at 1:36:32)