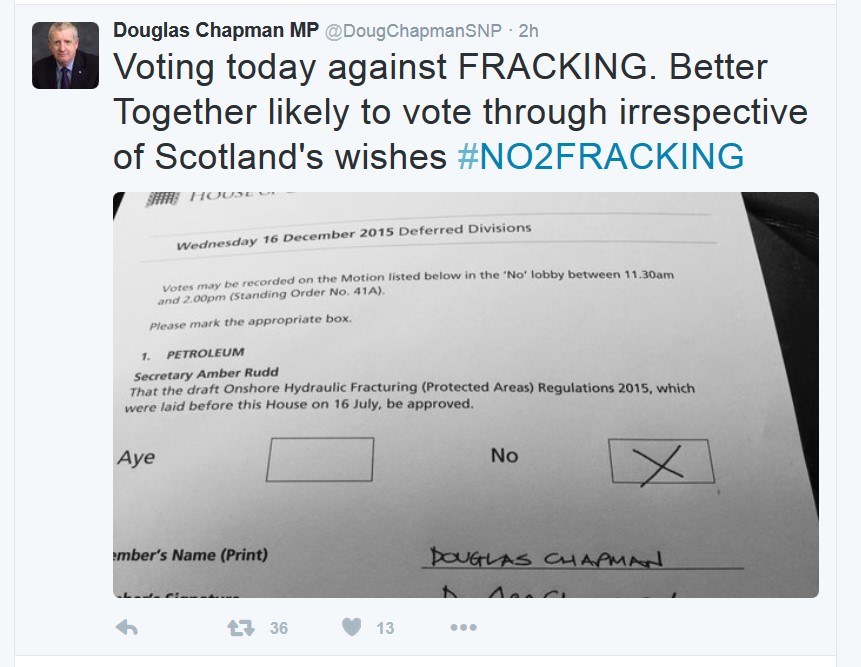 Labour whips have just said that MPs have voted to allow fracking under National Parks and other protected areas.

The vote approved the government’s Draft Onshore Hydraulic Fracturing (Protected Areas) Regulations 2015. There was no debate and currently no details on how individuals MPs voted but we’ve compiled a list of members who tweeted saying they opposed or intended to. See bottom of post for the list.

The regulations allow oil and gas companies to drill wells under National Parks, Areas of Outstanding Natural Beauty, the Broads and World Heritage Sites at depths of at least 1,200m.

Some MPs opposed the passing of the regulations when they were read out in the Commons yesterday evening. Under parliamentary rules, the vote was then deferred until today, when MPs filled in paper ballot papers between 11.30am and 2pm.

Opponents of fracking have accused the government of a U-turn by allowing fracking under protected areas.

A statement made in January 2015 promised an “outright ban” on fracking in National Parks and Areas of Outstanding Natural Beauty and Sites of Special Scientific Interest.

But in February, the then Energy Minister, Amber Rudd, told The Telegraph preventing fracking beneath such areas would not be practical and would unduly constrain companies.

Last month, the government made a statement that it wold ban drilling from the surface of National Parks and some other protected areas through a clause in oil and gas licences.

Opponents argue the regulations could expose many of the UK’s most fragile and treasured landscapes to noise, air and light pollution, resulting from fracking rigs being situated around the edges of protected areas.

The following MPs tweeted to say they voted against or intended to:

This morning a few MPs opposed to the regulations went on Twitter to say how they would vote.

Reaction to the vote