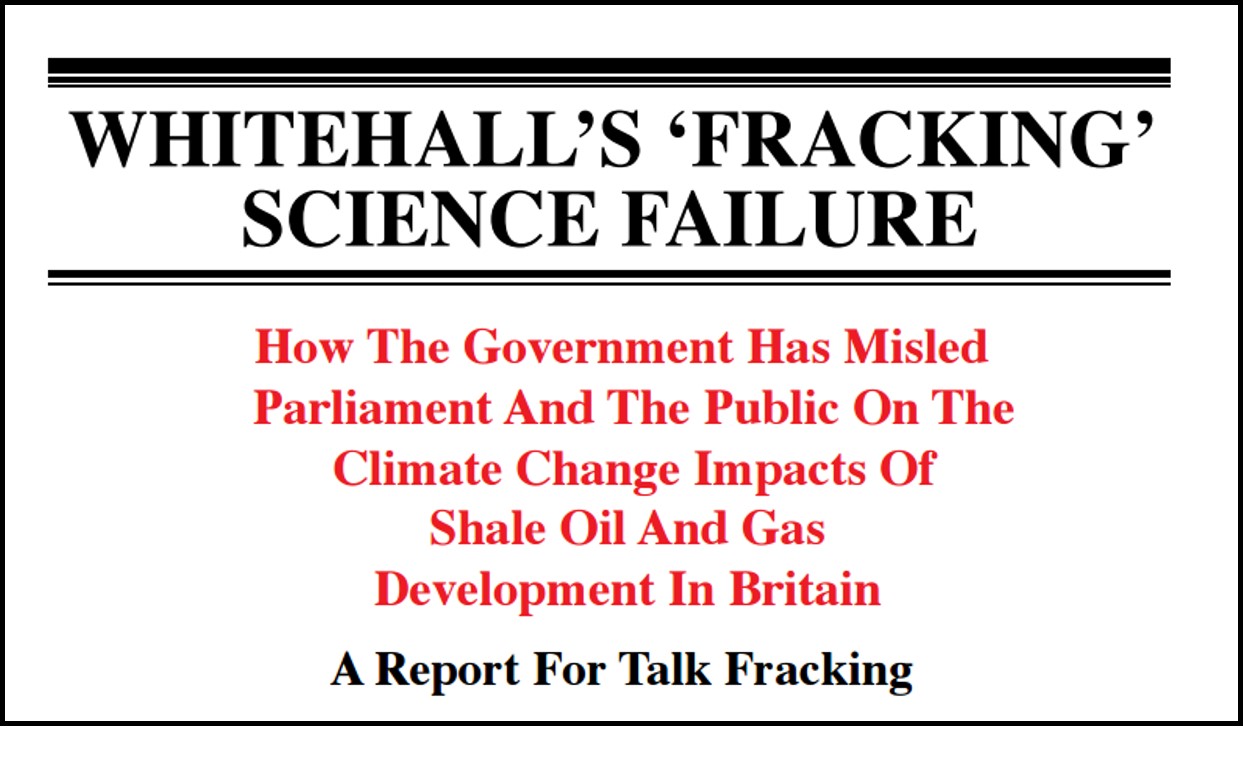 The government misled parliament and the public over the climate change impacts of shale gas, according to new research. It suggests that ministers may even have breached their code of conduct by giving MPs inaccurate information.

The conclusions, by environmental investigator Paul Mobbs, centre on the government’s use of a report to portray shale gas as a bridge to a green, low carbon future.

The report on shale’s greenhouse gas emissions was commissioned by the then Department of Energy and Climate Change (DECC) from David MacKay and Timothy Stone and published in 2013.

“With the right safeguards in place, the net effect on UK GHG [greenhouse gas] emissions from shale gas production in the UK will be relatively small.”

But Paul Mobbs, in a paper launched today by the campaign group, Talk Fracking, said there could be “little faith in the accuracy” of MacKay and Stone’s findings because of problems in the data they selected and the analysis.

“The problem for the MacKay -Stone review, and for the UK Government in general, is that the benefits claimed in the report cannot be supported when we look at the latest research on the emissions from shale oil and gas production.”

He said ministers at DECC, its successor department Business, Energy and Industrial Strategy (BEIS) and at the Department for Environment used the report to “mislead members of Parliament and Parliamentary committees into accepting shale gas exploration”.

“In quoting the report, especially after the shortcomings of the report were repeated[ly] expressed by other bodies from early 2014 onwards, ministers have misled Parliament and arguably breached the Ministerial Code.

“No minister can quote its conclusions without demonstrably misleading MPs and the public as to their current state of the science relating to ‘fracking’ and climate change.”

“It is not simply that more recent research has invalidated the report. At the time of its publication it was not possible to state the conclusions of that report with such certainty – and at no point did DECC ministers properly communicate those uncertainties when making their statements.”

Ministers including Michael Fallon, Andrea Leadsom and Amber Rudd have referred to MacKay and Stone in parliamentary answers to defend government policy. 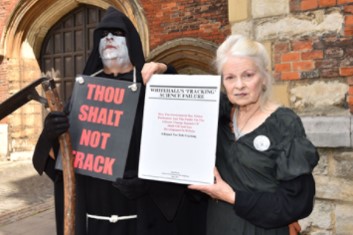 The MacKay and Stone findings were referred to in government guidance issued in January 2017 and by the Church of England in its briefing paper about shale gas and fracking in December 2016.

Today, Dame Vivienne West, accompanied by “a grim reaper” presented Mr Mobbs’ investigation to the Archbishop of Canterbury. She said:

“The MacKay-Stone report must now be considered wrong and fatally flawed. Furthermore, the evidence now suggests that shale gas and oil extraction could be considerably worse than coal in terms of its effect on climate change and global warming”.

A spokesperson for BEIS said :

“The Mackay-Stone report was peer-reviewed by experts outside of government. We regularly assess new evidence on shale gas and its implications.”

Moratorium and withdrawal of report

Mr Mobbs called today for a moratorium on fracking operations and the withdrawal of the MacKay and Stone report.

He also said there should be an immediate government review of the policy of unconventional gas and oil, taking into account all available research.

In addition, parliament must review the use of the MacKay-Stone report in recent decisions on oil and gas extraction policy, he said.

MacKay and Stone said they used data from US studies to estimate the potential fugitive emissions from shale gas in the UK and its potential impact on UK climate change objectives.

“The result of MacKay and Stone’s decisions on their use of data is to improve the case for shale gas over other energy sources.”

He said they failed to represent the range of data available. They excluded particular reports which recorded high shale gas emissions but relied on another, over which there were concerns about sampling and equipment.

“More critically, because they [MacKay and Stone] failed to address the uncertainties involved in producing the data, using different methodologies, the way they express their results tends to improve the case for shale gas relative to other fossil fuel sources.”

Mr Mobbs said MacKay and Stone based their estimates of emissions on what are called “bottom-up inventory studies”. These are studies which assess leaks from oil and gas operations by testing small parts of equipment in labs or on test rigs. Bottom up studies often record lower emissions than what are called “top-down” studies, which measure emissions in shale production areas.

He also criticised MacKay and Stone’s failure to consider the short-term impacts of methane. They looked at its global warming potential over 100 years, rather than 20 years. This gave a lower overall result because it excluded short-term effects.

MacKay and Stone used a very large figure for gas production, Mr Mobbs said, but their figures for fugitive emissions were based on lower well production data, artificially reducing the impact of shale gas.

Last year, the Committee on Climate Change concluded that shale gas exploitation on a significant scale would not be compatible with UK carbon budgets unless three tests were met.

The third test was a reduction in consumption elsewhere in the economy to “make space” for shale gas production.

“Given our currently available knowledge of the scale on emissions, we must be extremely sceptical of the Government’s ability to meet ‘test 3’.”

Mr Mobbs called for “a full and transparent assessment” of Government’s policy, taking into account the latest available research.

“Until such a review takes place, UK policy on on-shore oil and gas will remain demonstrably flawed, and an arguable danger to human health and the local/global environment.”

Church of England briefing paper on shale gas and fracking