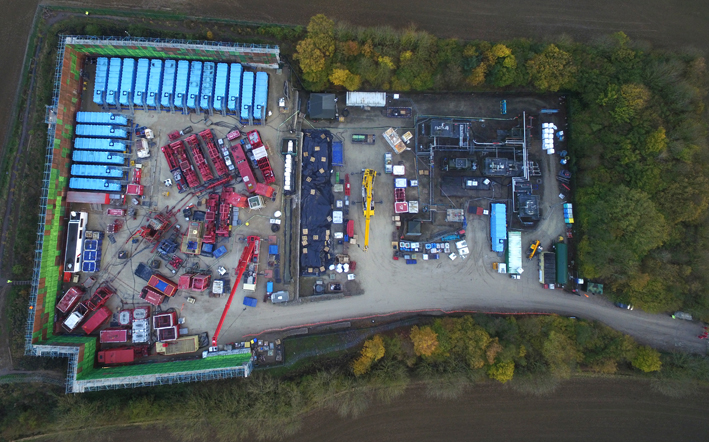 Opponents of Third Energy’s plans to frack in North Yorkshire have criticised a site restoration fund as inadequate.

The fund, agreed between Third Energy UK Gas Ltd and North Yorkshire County Council, has been set at £160,000. It is designed to pay for the restoration and after care of the site at Kirby Misperton if Third Energy went out of business.

“The monies seek to secure the works identified within the approved Restoration Plan which is available to view by clicking here.

“The works identified are considered to be reasonably covered by the monies secured by legal agreement for the purpose of securing the proper restoration of the site to original condition as existed prior to the development being undertaken.

“The bond does not cover the sub surface issues as these are matters for other agencies.

“Restoration does not fall to local residents. We have the bond in our account now and it will remain there in the event of a problem with restoration on site.”

The campaign group, Frack Free Ryedale, described the level of the fund as “deeply worrying”.

The Third Energy group is 97% owned by Barclays Bank. But the financial status of Third Energy UK Gas Ltd is unknown because the company is more than two months late with filing its accounts for 2016. The most recent publicly-available figures showed a loss of £3.8m. DrillOrDrop report

The company is currently waiting for approval from the Energy Secretary, Greg Clark, to frack the KM8 well.

“The news that North Yorkshire County Council has allowed Third Energy to frack at Kirby Misperton and the only safety net in place should they go bust is a deposit worth a minute £160,000 is deeply worrying.

“Yet again NYCC has allowed Third Energy to ride roughshod over our community and have failed to put in place adequate safeguards should Third Energy go out of business.

“The financial stability of Third Energy is yet unproven because the fracking firm has failed to publish its company accounts on time (yet again) and with their parent company based in the offshore tax haven of the Cayman Islands there is genuine concerns that if something did go wrong at KM8 the local residents could end up dealing with the clean-up should Third Energy disappear.

“As it stands now £160,000 probably wouldn’t cover the cost to repair the potholes in the road caused by Third Energy’s HGV’s let alone a contaminated well site.”

“We urge the Energy Secretary, Greg Clark, to step in and refuse fracking consent until Third Energy can prove it is financially stable and adequate safeguards are in place.” 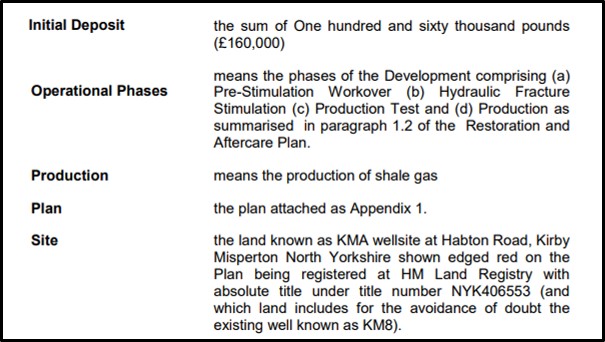 Extract from legal agreement on fund for restoration and after care

The arrangements for the restoration fund are set out in a legal agreement, known as a Section 106.   The agreement requires Third Energy to pay £160,000 to the county council not less than five working days before the start of development.

The council will hold the money, known as a deposit, as a financial commitment required as a condition of the planning permission granted in May 2016.

The amount of the deposit will be reviewed under the agreement every five years.

The council will repay the money 12 months after the completion of the restoration works. 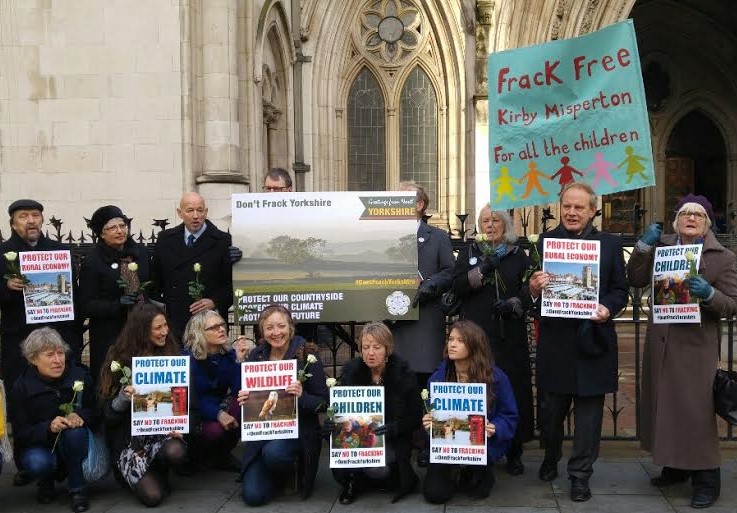 Campaigners outside the HIgh Court for the judicial review hearing in November 2016. Photo: DrillOrDrop

A year ago, Frack Free Ryedale and Friends of the Earth argued at the High Court that North Yorkshire County Council should have required Third Energy to pay a bond, as opposed to a deposit, as part of the planning permission.

Their barrister, David Wolfe, said the council had failed to secure long-term protection against environmental damage.

But North Yorkshire County Council and Third Energy said a bond could not be required of the company in these circumstances.

Nathalie Lieven, for Third Energy, told the court the risk that Third Energy would not be able to deal with a pollution problem was “infinitesimal”.

The council’s barrister, Sasha White, told the court the deposit scheme would address the concerns of objectors.

He said the level of financial commitment would be a planning judgement for the council and would depend on the detailed scheme for restoration.

The judge at the case, Mrs Justice Lang, suggested: “This will not give anyone much comfort.”

She said the planning application had been subjected to detailed scrutiny through a public consultation but there would be no scrutiny by the public of the documents, such as the detailed restoration scheme, submitted to satisfy the planning conditions.