Cuadrilla and campaigners reflect on a year at Preston New Road

A year ago today, Cuadrilla began work at its Preston New Road site near Blackpool in Lancashire, the first site in the UK to host and frack horizontal shale gas wells.

Since then, opponents of Cuadrilla’s plans have maintained daily protests outside the site.

To mark the anniversary, DrillOrDrop invited Cuadrilla and its opponents to reflect on what the past year had meant, what had been achieved and what the future holds.

DrillOrDrop will also be reporting on the Black Friday protest event outside the Preston New Road site scheduled for later today.

“Looking back since we started operations, a year ago,  at our shale gas exploration site at Preston New Road,  we are very pleased with the progress.   We have constructed a world class site and made excellent progress in drilling our first two exploration wells.  We have drilled a vertical well through the Upper and Lower Bowland shales and acquired several hundred feet of shale rock samples which is in the process of being analysed.  Initial results from this analysis are very  encouraging.  We have two horizontal wells to drill , and will shortly commence on the first of these at a depth of some 2km below the surface.  This will be the first time this will have been done in UK shale rock.  We then plan to frack both horizontal wells in the Spring and subsequently test the flow rate of natural gas from the Shale.

“We are also delighted on the positive feedback we have received from people in Lancashire on several new initiatives that we have implemented to keep people informed and updated on our operations.  These include PNR Live, a monthly live streamed visit of the site with the opportunity for people to ask our experts questions and our ePortal which shares our comprehensive environmental monitoring data on a monthly basis.  We are proud of our strong track record on health and safety on site and of the Environment Agency assessment of our compliance with our permits.

“Sadly, alongside legitimate peaceful protest from those opposed to shale gas exploration we have seen a small minority of activists from outside the county conduct illegal protest including assaults, intimidation of small local businesses and road blockages. This has caused the most inconvenience to local people and businesses and on occasion the Emergency Services who rely on the main Preston New Road.

“Many of the people I hear from in Lancashire are very supportive of shale gas explorations.  They know how committed we are to putting Lancashire first in terms of jobs and revenue created by our operations.  Already we have created over 50 local jobs and almost £5m has gone back into the local economy.  In addition those people living near to the site have directly benefited from our community benefits payment for the two exploratory wells, with £100,000 being shared directly amongst them and another £100,000 going to a Community Benefit Fund which will support local projects of their choice.

“As we begin 2018 we need more than ever to find a new source of natural gas for the UK.  Energy security remains critical as costly gas imports from North Africa, the Middle East and even the US and Russia continue to grow.  We are confident that our exploration in Lancashire will result in a new indigenous source of gas which will bring significant  economic prosperity to Lancashire and benefit our environment by displacing gas imports.” 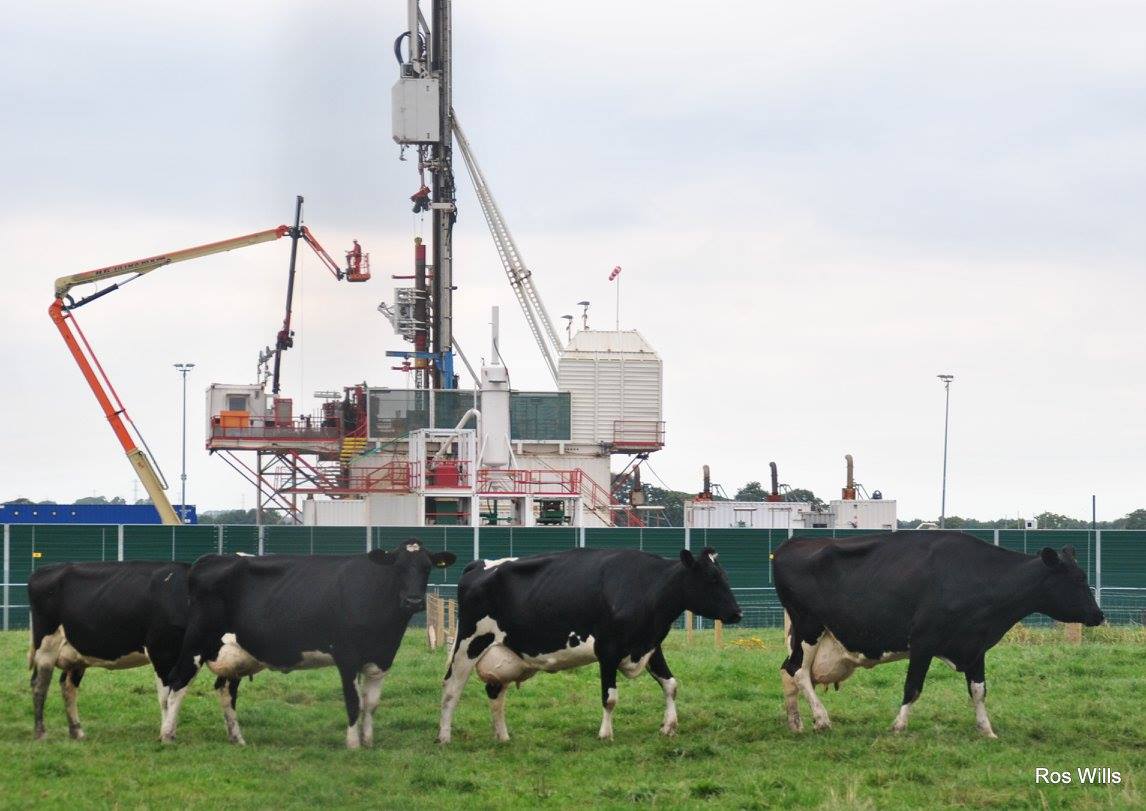 “The last year has been an extremely challenging one for local residents.

“Firstly, there has been the destruction of the countryside caused by the creation of the site. It is sad to see what was once a green field, grazed by sheep and cows, turned into an industrial site. The rig can be seen from quite a distance away. We have many more massive vehicles coming down the A583 and there is a constant police presence. It has changed the area that we live in quite dramatically.

“Secondly, the goal posts seem to be constantly changing, with repeated alterations to the EA permits and planning conditions. All of these requests for change take time to investigate and comment on: we feel that the changes are never for the benefit of the local community.

“Thirdly, the fact that Cuadrilla continues to forge ahead with their site despite the ongoing legal challenges is a cause for concern as it shows they have contempt for the legal process.

“This is extremely worrying given the continuing publication of academic research showing the dangers of fracking.

“We trust that in 2018 our legal challenge will be successful and Cuadrilla will have to stop.”

“On Friday we will realise a year at Preston New Road Rolling Roadside Protest and for many of us, this theft of time has been brutal and cruel, stealing from us our joy, time with family, jobs, income, relationships and more. There is a rage inside us at the injustice and cruelty of this industry and our government that forces it on us. People have lost precious moments with dying loved ones, had family break ups as a result of absence and lost so much that could have been ours if 2017 had been for ourselves.

“There is both anticipation and concern about what this anniversary brings – understandably because this rage cannot be denied. On a personal level, I have spent this year trying not to be terrifying so that others would not be too scared to come join us. I have found places of calm and peace within the chaos of it all, in which to heal and re-focus (the Women’s Call is my haven) and importantly put aside each week’s anger and started over.

“But deep within me, where the image of my little granddaughter has been replaced with her towering over me and the bits in-between aren’t there because I missed the growing, that bit is boiling.

“We have spent this year trying our best to balance the needs of residents and road users, with the need to protect our children. Along the way we have faced challenge after challenge, with often terrifying scenes. We have been attacked in the old-world press for being NIMBYs, for being outsiders, for being hobbyists, for being anarchists, for being layabouts, for being wealthy, for being paid, for being unpaid… no matter what we do, those with an angle and a vested interest will find fault.

“Preston New Road has been a place where, if you’re there enough, the pressure builds. But on our side there is still no violence. We don’t attack. We protect and defend through disruption and delay. There is a good reason to vent steam where there is pressure and that is what Black Friday will serve. We need a steam burst to stop us boiling over, an act that will seek to include all our elements and make clear that we mean what we say when we said no.

“There is room for all types of action in this movement and I despise aggression but I am all for making a bold stand on a single day to let rage be let out. I believe shareholders, government and industry have grown too used to our beautiful humanity that they cease to recognise the drive that puts us at the roadside in all weathers and away from our precious loved ones.”