An independent review has made “major criticisms” of Europa’s application for an environmental permit for oil drilling plans near Leith Hill in Surrey.

The review, commissioned by local campaigners and funded through a 38 Degrees petition, concluded:

“Many significant errors, inconsistencies and omissions have been identified throughout the documents reviewed.”

It said the application did not “facilitate public consultation” and questioned whether it met Environment Agency standards. The review highlighted:

The authors, from two environmental consultancies, also criticised the one-month public consultation as “a wholly inadequate time period in which to robustly review” the application.

They said they had not had time to review Europa’s waste management plan and said the Environment Agency’s role as regulator had been “frustrated”:

“There is insufficient opportunity for an alternative technical viewpoint to be presented and as such limit the ability of the Environment Agency to make a fully informed objective assessment.”

The Environment Agency (EA) said last month it was minded to approve the permit, which is one of the final hurdles to Europa’s plans for oil drilling at the site at Bury Hill Wood, in the Surrey Hills Area of Outstanding Natural Beauty. (Link to draft decision document)

The EA said it had taken into account “all relevant considerations and legal requirements” and the permit, currently in draft form would “ensure that a high level of protection is provided for the environment and human health.” It did, however, invite public comments as part of a final consultation, which closes tomorrow (29 March 2018). 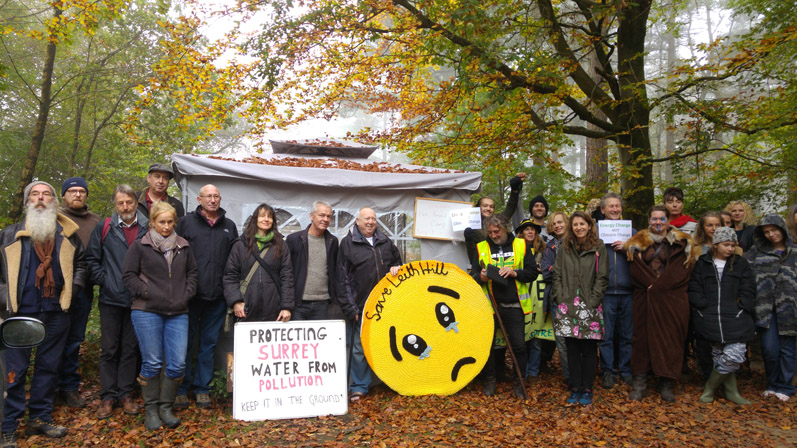 “Campaigners are asking that, if the Environment Agency is not carrying out its own independent assessment, they are given an opportunity to provide more evidence on which an informed decision can be made. I support that call wholeheartedly and have asked the Environment Agency to make the necessary adjustments to allow for the report to be completed and considered as part of the consultation. An informed decision rather than a quick one is better for all involved.”

The permit application was submitted in April 2017. Link to DrillOrDrop report

The review, submitted to the EA today, assessed documents submitted by Europa for the permit, as well as official guidance.

One of the company’s key application documents was a 307-page site condition report.  Europa said:

“This document has been provided as a record of the site condition prior to commencing exploratory operations.”

“In addition to the desk study, primary data has been collected from a number of other sources including the hydrogeological risk assessment.”

But the review said the site condition report did not present any quantitative measurements of the environmental conditions at and around the site. It also did not give details of the final site design.

“It does not form a record of the site condition in the sense implied by the Environment Agency guidance and is considered demonstrably inadequate for the purposes that it set out to achieve.”

The review said there were inconsistencies and confusion about the area of the site and the proposed surface materials. In places, the report referred to an aggregate cover of 250mm depth but in others it mentioned a depth of 300mm or the alternative of ground matting. These issues are relevant in any proposals for managing water that falls on the site. The review said:

“Due to these inconsistencies it is not possible to have sufficient confidence in the water management calculations presented.

“No reason is given as to why site design has not been finalised prior to seeking the permit; or the basis of considering ground matting as an optional component of the design.”

The review also said the site condition report did not refer to the latest geological mapping but relied on smaller-scale maps dating from 1933.

It said more extensive Quaternary deposits shown on the most up-to-date maps suggested there was a “potential direct hydrogeological connection” between a Lower Greensand outlier and the aquifer which supplies drinking water to Dorking. But this was not mentioned in the application.

The review pointed to what it called “failings in geological understanding”, which it said had “important implications” for the risk assessment included with the application. The terminology on containment systems to prevent pollution were muddled, the review said.

It added that common design standards for these systems were not included in the site design. The company had proposed the use of a Bentofix membrane to build secondary containment bunds. But the review said this was “sub-standard” for oil sites because the membrane was flammable.

“The failure to incorporate these commonplace standards in site design is not acceptable for a modern industrial facility.” 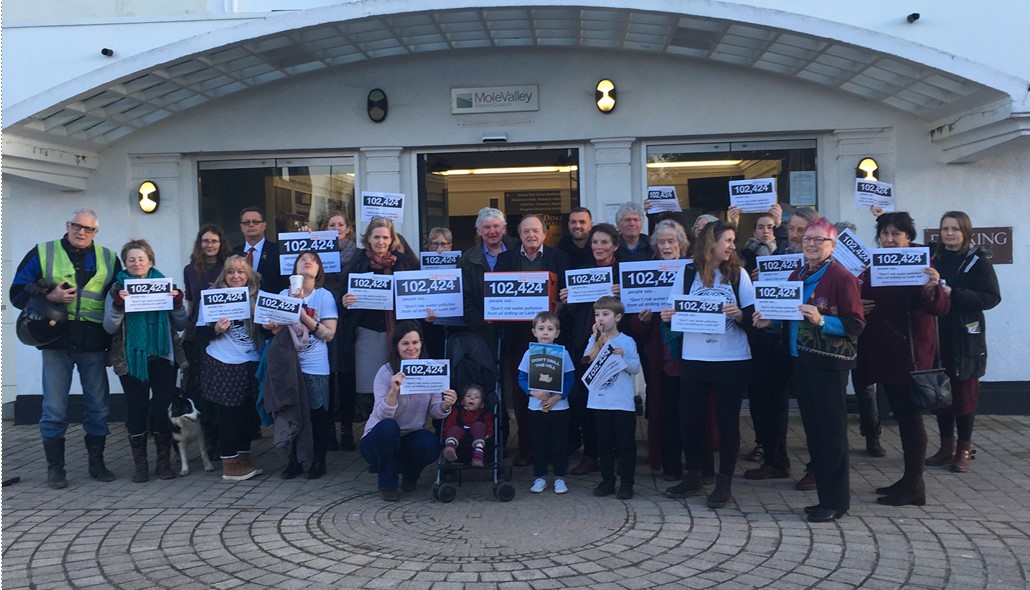 The Bury Hill Wood site is on a principal aquifer in the Lower Greensand rocks.

But in its application, Europa said:

“Once the wellsite is established there is “essentially no hydrogeological risk to groundwater and surface water receptors associated with the drilling and testing phases of the proposed development”.

The review criticised the application for what it said was “an extremely limited” discussion of groundwater flow in the aquifer. There was, it said, no discussion of issues such as porosity, hydraulic conductivity, transmissivity, storage, recharge or hydraulic gradient.

The application used a qualitative risk assessment for groundwater, the review said, because Europa concluded there were few, or only insignificant uncertainties. But the review said this decision was not supported by evidence or a risk screening exercise, in contravention of the EA’s guidance.

“This coupled with the failure to present basic hydrogeological information and hence a failure to describe the groundwater system in anything other than the most rudimentary detail, mean that the risk assessment is not fit for purpose.”

The review said Europa’s proposed three-month period of baseline monitoring of groundwater was “inconsistent with establishing a natural baseline, for which at a minimum one hydrological year’s worth of data are required”.

“The total failure to obtain any baseline information whatsoever during this period appears to illustrate a considerable lack of foresight, further undermining confidence in the Applicant’s ability to accurately assess the risks associated with the application.”

Location of the Bury Hill Wood site in Surrey

The review suggested that the Bury Hill Wood was “in a significantly sub-optimal location” for the target formations to be drilled.

Reinterpretations of data has meant the drilling angle was “highly unusual”, the review said, and at the very limit of what was technically possible.

“The location of the drill site, therefore, introduces additional risk, establishes the drilling method at its design limits and increases the risk of borehole construction and integrity failures.”

The review said there was no data in the application on the mechanical properties of the rock formations on which Europa proposes to use an acid squeeze. This meant it was not possible to know what pressure would result in hydraulic fracturing of the rocks.

“The approach proposed to test the pressure in the field does not provide sufficient confidence that the acid squeeze will not result in hydraulic fracturing; and the method inadequately assesses and mitigates the risk of hydraulic fracturing taking place within the bespoke permit for exploratory operations.”

“In the event that the borehole is not successful in establishing commercially producible petroleum, the borehole will be abandoned.”

“This statement confirms that the exploratory well is intended for production should the resource prove commercially-viable and is therefore contrary to much of the emphasis of the risk assessment, and various aspects of the site design, which stress the temporariness of the wellsite due to its exploratory nature.

“It therefore appears that the hydrogeological risk assessment (and presumably other aspects) were undertaken without due regard for the activities proposed on site.”

The apparent intention contradicts the purpose of the Environment Agency permit, the review said, which is for exploration and testing, not production.

Europa’s assessment concluded that all environmental risks from the proposed operation were low, insignificant or none after mitigation.

But the review said the assessment did not include key risks and potential hazards in the exploration process.

“There is a general lack of structure, methodological description and uncertainty analysis. Furthermore, no conceptual model is developed.

“The lack of discussions, references, methodological descriptions, conceptual model, assessments of probability of occurrence etc. all contribute toward significantly undermining the credibility of the risk assessment.”