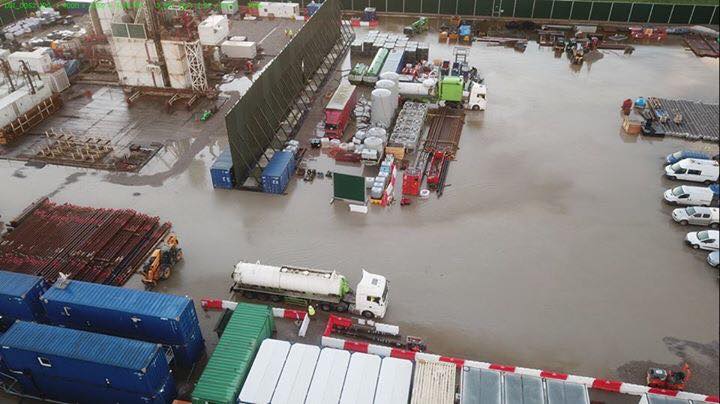 It had previously been required to send the water by tanker to an offsite treatment centre. But in a statement issued today the Environment Agency said it had agreed to a variation of the company’s environmental permit. The water can now be processed on site and then piped into the Carr Bridge Brook.

Several times last year Preston New Road was photographed with surface water flooding. In April 2017, the Environment Agency told Cuadrilla to improve its surface water management after it breached the permit conditions by allowing water from the site to reach a tributary of the Carr Bridge Brook. DrillOrDrop report

News of the permit change slipped out last month at the inquiry into Cuadrilla’s plans to frack at Roseacre Wood.

The company’s barrister, Nathalie Lieven, told the hearing that the Environment Agency had issued a draft permit for treatment of surface water at Preston New Road. (DrillOrDrop report)

The company said it proposed to apply for a similar permit for the Roseacre Wood site, if planning permission were granted, allowing it to reduce the number of tanker movements.

The EA said in today’s statement:

“Cuadrilla is required to remove and process rainwater that falls on its Preston New Road site and the variation to the permit sets out the conditions that must be followed in order to manage this process.”

We’ve been unable to find details of the conditions or the reasons behind the EA’s decision.

Cuadrilla submitted a 23-document application for the permit variation in December 2017.

It said the proposed treatment plant would use a chemical-free electrocoagulation technology, capable of handling up to 10m3/hour. The company conceded that the process could change the water chemistry but said the discharged water would be monitored.

At the time of the application, Frack Free Lancashire said:

“We are highly disappointed that Cuadrilla appears to be able to move the regulatory goalposts at will. The situation seems to change on a weekly basis as they salami-slice their conditions for their own benefit.”

People who commented on the application complained about the potential impacts on wildlife and water management in surrounding fields.

The application was made days after the EA approved other changes to the permit on the volume of fracking fluid and duration of flaring. DrillOrDrop report

Last month, Cuadrilla applied for a standard rules permit for Preston New Road, described as allowing gasification, liquefaction and refining. The Environment Agency said it was not inviting comments on this application.