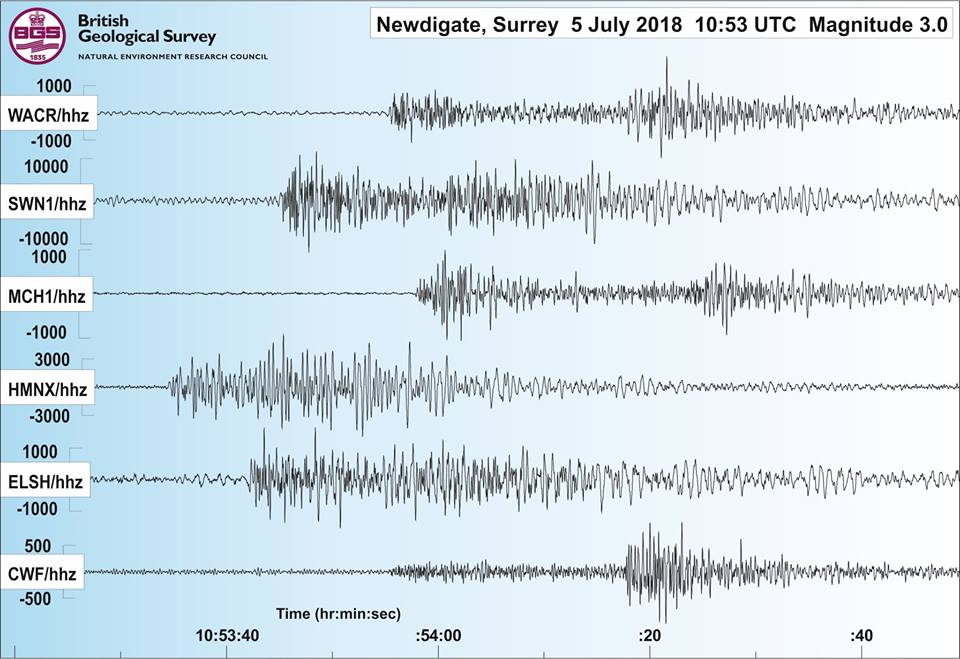 In a letter in this morning’s Times newspaper, senior lecturer Stuart Gilfillan and professor Stuart Haszeldine, both of University of Edinburgh, and emeritus professors Bill McGuire and Richard Selley, said:

“The abrupt onset of the earthquake cluster recorded by the British Geological Survey at Newdigate since 1 April 2018 requires an explanation, and gives rise to our concerns about safety.

“We believe that public health and the environment are not being adequately protected given the unstable geology, which has not been identified before permits were issued for the currently active drill sites.”

They have written to the Business Secretary, Greg Clark, and regulators of the oil and gas industry urging them to address the issue urgently.

“Oil drilling and extraction, and re-injection in particular, can cause earthquakes.”

There are two active hydrocarbon sites in the area where the earthquake cluster was felt: Horse Hill, operated by Horse Hill Developments Ltd, near Gatwick Airport; and the Angus Energy site at Brockham near Dorking.

Both companies have said there is no connection between their operations and the earthquakes (DrillOrDrop reports here and here).

Tests to assess the flow of oil at the Horse Hill site began after the start of the earthquake cluster.

This morning, UK Oil & Gas plc, the major investor at Horse Hill, said it was “very disappointed” that the four academics had issued the letter “prematurely”. UKOG said it hoped their motives were “purely scientific” but added “it appears otherwise as they have not been involved in the scientific investigation of the Newdigate tremors”.

“The Horse Hill operator, Horse Hill Developments Ltd, was pumping at the Horse Hill site during only one of these 12 events. Pumping only started on 9 July 2018, following the first 8 tremors. Also, the Horse Hill oil well was shut-in all day on 18 July 2018.”  Full statement by UK Oil & Gas plc on letter to The Times

“It is scientifically and physically impossible for us to have caused these tremors.”  Link to Angus Energy comment on Surrey earthquakes

But the academics said today:

“A causal link with either well site cannot be ruled out, so we need the full picture for the risk assessment.

“The moratorium on drilling, re-injection and flow testing should be put in place immediately and remain in force until the records of fluid injection, and local faulting activity have been comprehensively surveyed and interpreted, and the triggering mechanism for this quake cluster phenomenon properly understood.”

In a statement issued this lunchtime by the campaign network, Weald Action Group, Professor Selley said:

“The location of the swarm close to two active fields suggests more than serendipity and merits investigation.”

“We know from existing borehole records that the drilling target is between 500 to 1000 metres below ground surface, and that is within the range of the latest depth estimates at which these earthquakes are believed to be occurring.”

“These earthquakes are unique and unprecedented events in the region, and seem to be increasing.

“I think the injection of acid and injection of waste waters may have caused uncontrolled consequences, which were not expected. This activity needs to be paused immediately, to understand what these companies are doing underground, and prevent any chance of leakage or earth tremors affecting people at the surface.” 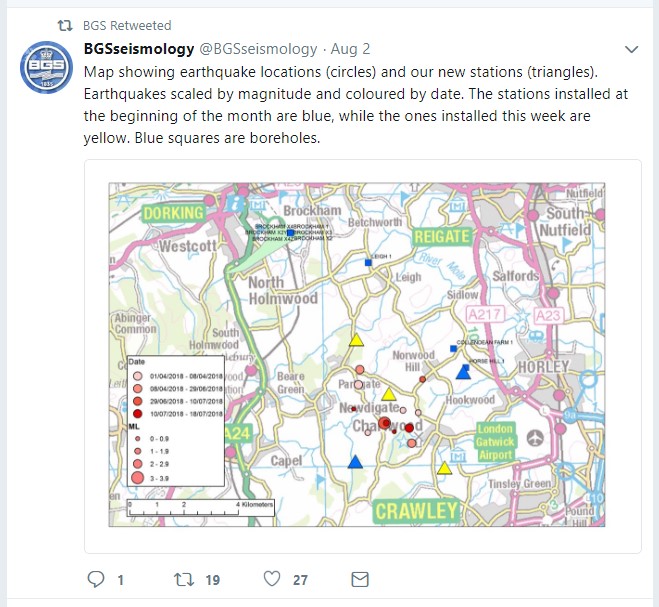 Last week, the British Geological Survey installed three extra sets of equipment to measure any future seismic activity in around Newdigate. This brings the number of monitors in the area to five.

The most powerful earthquakes in the recent cluster had a magnitude of 3 and most were said to be at a depth of about 1km. They were felt in places including Dorking, Newdigate, Horley and Charlwood in Surrey and in Crawley, West Sussex. Before April 2018, there had been no recorded earthquakes in Surrey for 50 years.

The Green MEP for the area, Keith Taylor, said:

“I welcome the British Geological Survey’s efforts to further monitor this activity and wholeheartedly support the call from geology and seismology experts for a moratorium on any oil and gas activity in the geological region until the results of any investigation are clear. The case for employing the precautionary principle is obvious.”

Also last week, the Oil & Gas Authority (OGA) released the latest data on the volume of injected water at the Brockham oil site. This showed an increase from 3m3 in March 2018 to 73m3 in April 2018. According to the OGA data, this followed several years of no water injection at the site. Link to OGA data page and data for Brockham

“The figure of 73 m3 reinjected at Brockham in April after an apparent long period of no or very low activity coincides with the onset of earthquakes in Surrey. This is concerning and any relationship between the two needs to be investigated further given that wastewater reinjection has been proven to be the main cause of earthquakes in the Central U.S., and that several experts we have been in touch with, including professors: Richard Selley, Peter Styles and David Smythe, indicated that it could be linked to the recent seismic activity.”

The OGA data is provided by the site operators. On 11 July 2018, DrillOrDrop asked the regulator what steps it took to verify data from operators. We are still waiting for a reply.

“This is yet another example of a “gold standard” regulatory regime allowing operators to self-monitor and mark their own homework. There is no central database, the regulators hold data in disconnected systems that don’t allow for easy cross-referencing.”

DrillOrDrop also asked Angus Energy to comment on any relationship between injected water and earthquakes. The company has not replied.

The Brockham site is operating under an old-style environmental permit. DrillOrDrop reported this represented a regulatory loophole because the operator was not required by the Environment Agency (EA) to collect or maintain details on well stimulation or fluid reinjection.

“A decade worth of reinjection data for Brockham held by the OGA is unreliable, whilst the HSE and the EA do not have any data at all, except for what Angus reported to the EA for period of Jan 2015-Jan 2016 in their re-permitting application documents.

“Even if the reported monthly totals were correct, much more detailed data is needed for analysis, including times and dates of reinjection, volumes per episode, applied pressures, exact destinations, etc.”

On Wednesday (8 August 2018), Surrey County Council is due to decide a part-retrospective planning application for the Brockham site. This includes a sidetrack well, drilled in January 2017 which the company said was covered by planning permission but the council said was not. DrillOrDrop background report. DrillOrDrop will be reporting on the meeting