Hydraulic fracturing at the site at Preston New Road is expected within weeks.

The company has also applied for government consent for the second well.

“I’m obviously a very law-abiding citizen until the law doesn’t make sense anymore. And while I wouldn’t advocate anyone breaking the law, I actually would be prepared to come up to Preston New Road and break the injunction because I think it is a misguided way to prevent protest and so I wish everyone at Preston New Road a huge amount of luck and goodwill and I hope that if the injunction is broken Cuadrilla sees sense and doesn’t prosecute.”

DrillOrDrop understands that Dame Vivienne, a long-standing campaigner against fracking, is also willing to breach the injunction. Earlier this year, she modelled clothes with anti-fracking slogans at a catwalk show outside Ineos headquarters in Knightsbridge.

“Vivienne Westwood has said she will join Baroness Jenny Jones in breaking the Cuadrilla injunction.

“Her attention was first alerted by the Ineos injunction. Now the cancer is spreading to Cuadrilla. They, like Ineos, are acting in an undemocratic way, buying the law to deter people from their human right to protest against fracking”. 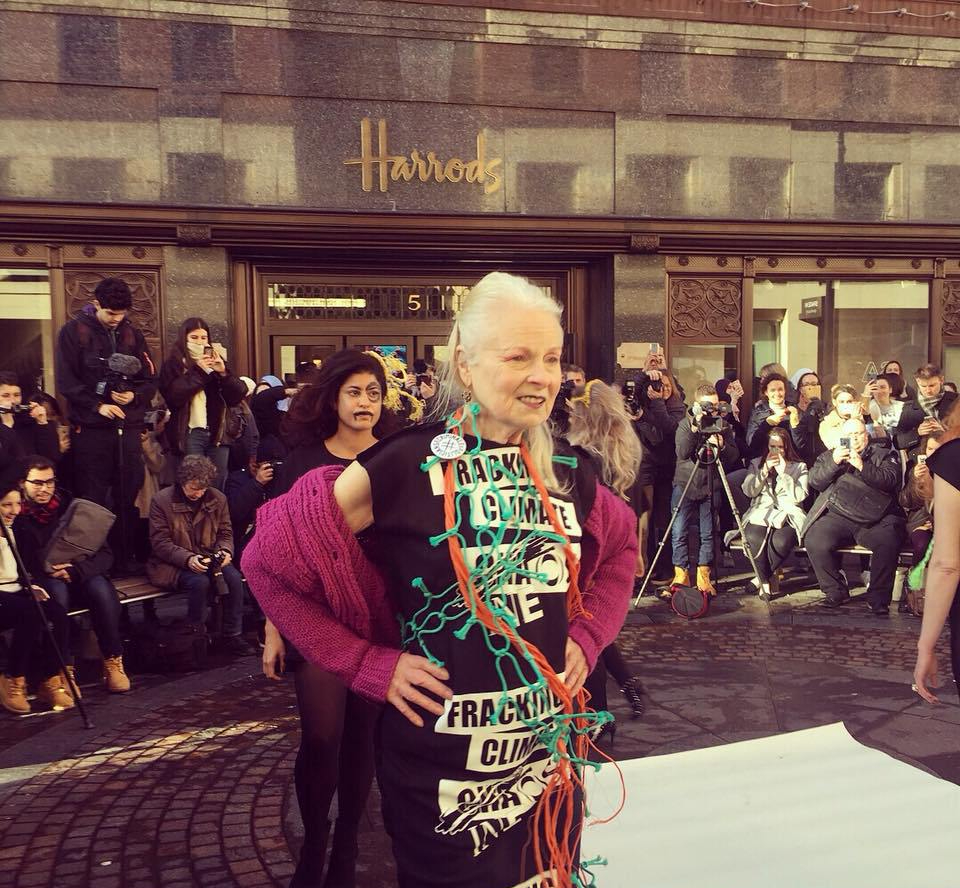 “When the democratic deficit is so enormous, people are left with very little option but to take peaceful, non-violent direct action.” 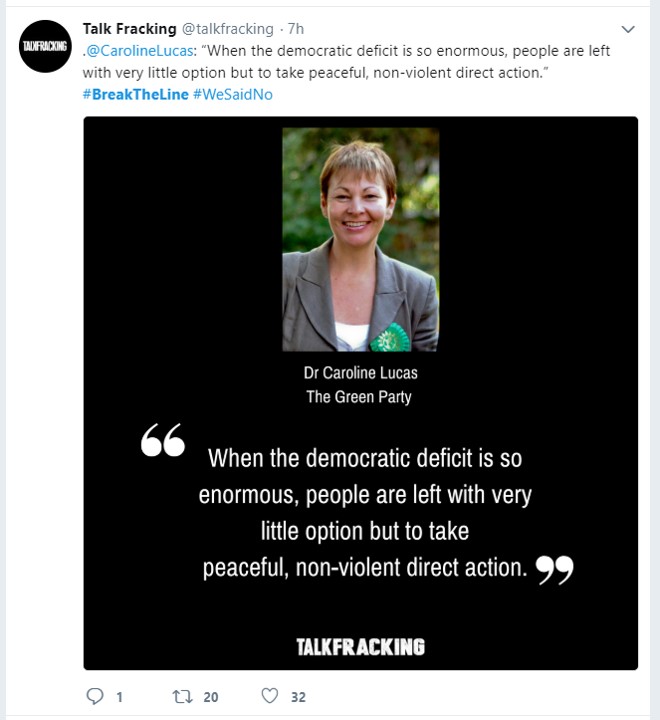 Last month, Cuadrilla said it would take legal action against the first challenge to the injunction (DrillOrDrop report).

Six anti-fracking protesters locked themselves together outside the site entrance on 24 July 2018. They described their action as “a deliberate attempt to highlight the abuse of the law by Cuadrilla”.

The company said the protesters “unlawfully blocked the entrance” of the site “clearly breaching the terms of the High Court injunction”.

“Cuadrilla will make a committal application to the Court in respect of each of the people who breached the injunction, which sets out the breaches of the injunction with supporting evidence.

“A hearing will be listed by the High Court at which those who breached the injunction will be summoned to appear.

“A Judge will consider the applications and hear any evidence that those who breached the injunction wish to submit in their defence and will then decide whether they committed contempt of court and if so, what penalty should be imposed.

“The range of penalties includes, fines, seizure of assets and custodial sentences of up to two years.”

The injunction was granted on 11 July 2018 (DrillOrDrop report) against a range of protest actions outside the site by “persons unknown”.

Cuadrilla has repeatedly said it was not seeking to prevent lawful protest. The High Court order specifically outlaws trespass, lock-on, slow-walking and lorry surfing protests, tactics that have been used in anti-fracking direct actions across England. It also prohibited “unlawful disruption” of named Cuadrilla suppliers.