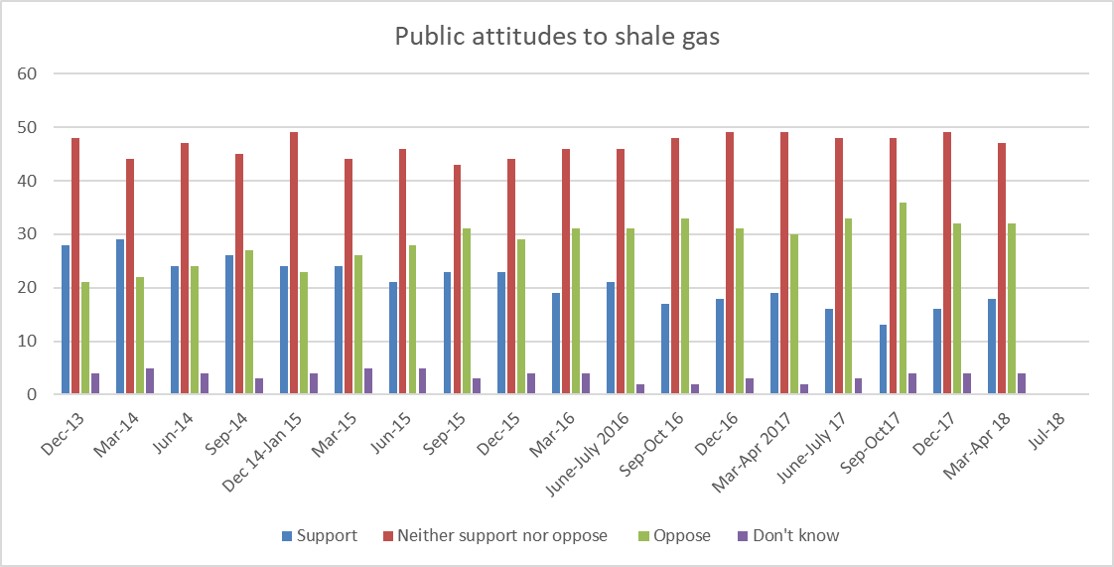 The latest findings, published this morning, cover only whether people were aware of the process.

The survey is commissioned by the Department for Business, Energy and Industrial Strategy (BEIS). Before the most recent survey, BEIS carried out a review.  Its response to the review, also published this morning, said questions about shale gas would now be asked annually, rather than quarterly, starting in April 2019.

“We will not be amending these questions at this stage but will continue to review them to ensure its reliability and value to the department and users.”

Questions about renewable energy remained in today’s survey results but there was not a question about attitudes to nuclear. This will also be asked annually.

A spokesperson for BEIS told DrillOrDrop:

“Following public consultation, we have amended the Public Attitudes Tracker (PAT) to reflect the department’s broadened policy portfolio following its transition from DECC to BEIS.”

“This approach will allow us to ask more topical focused questions on areas such as consumer issues or employment rights to a wider range of respondents.”

According to data from previous surveys, support for fracking had fallen since a record high of 29% in March 2014. Most recently, there were two consecutive increases in support. Opposition reached a record high last summer (36%) and, as usual, dropped slightly in the winter.

The main reasons for opposition were: Loss or destruction of the environment (57%); risk of contamination to water supply (31%); too much risk or uncertainty (28%); risk of earthquakes (29%)

Today’s results did include questions about the level of support for renewables.

On shale gas, the survey found that 78% were aware. This was up slightly on the previous figure of 76%.

BEIS said awareness was also highest among people living in Northern Ireland (88%) where there is a presumption against fracking.

“Ministers have been asking the public whether they support fracking on a quarterly basis for over four years. But, despite a huge PR push, opposition has always outstripped support—which has never exceeded 30% and long languished below 20%.

“How have the Conservatives responded to such a consistent rejection of the climate-destructive industry? By stopping asking what we think so often and giving fracking the green light in the meantime. While, at the same time, pushing through plans to cut our local government representatives out of the decision-making process.

“For all it’s rhetoric, you couldn’t ever accuse this Government of caring about ‘the will of people’. More and more, Britain is being governed by corporations for corporations; the people don’t get a look in.”

The Wave 26 tracker carried out 4,268 face-face in-home interviews with a representative sample of adults aged 16+. Fieldwork was conducted from 11-17 July 2018 on the Kantar TNS Omnibus. The questionnaire was designed by BEIS and Kantar Public.

Updated  at 11.40am with information and link to government consultation response to the Wave tracker and to include reaction from Keith Taylor.