Cuadrilla confirmed this evening there was a 0.3ML earth tremor during fracking this afternoon at its Preston New Road shale gas site near Blackpool.

It was classed as an amber event under the seismic monitoring regulations, known as the traffic light system.

Cuadrilla said it expected that fracking would continue as planned tomorrow.

This is the second amber event detected during fracking in the past three days (more details). It is the third consecutive day of seismic activity near the site and the 12th tremor recorded since fracking began on 15 October 2018.

Extract from British Geological Survey record of seismic activity in the British Isles since 18 October when the Blackpool tremors began.

Following an amber event, Cuadrilla is allowed to complete the fracking operation with caution. Pressure in the well has to be reduced by flowing back liquid. The integrity of the well has to be checked and operations continue, possibly with reduced pressure. 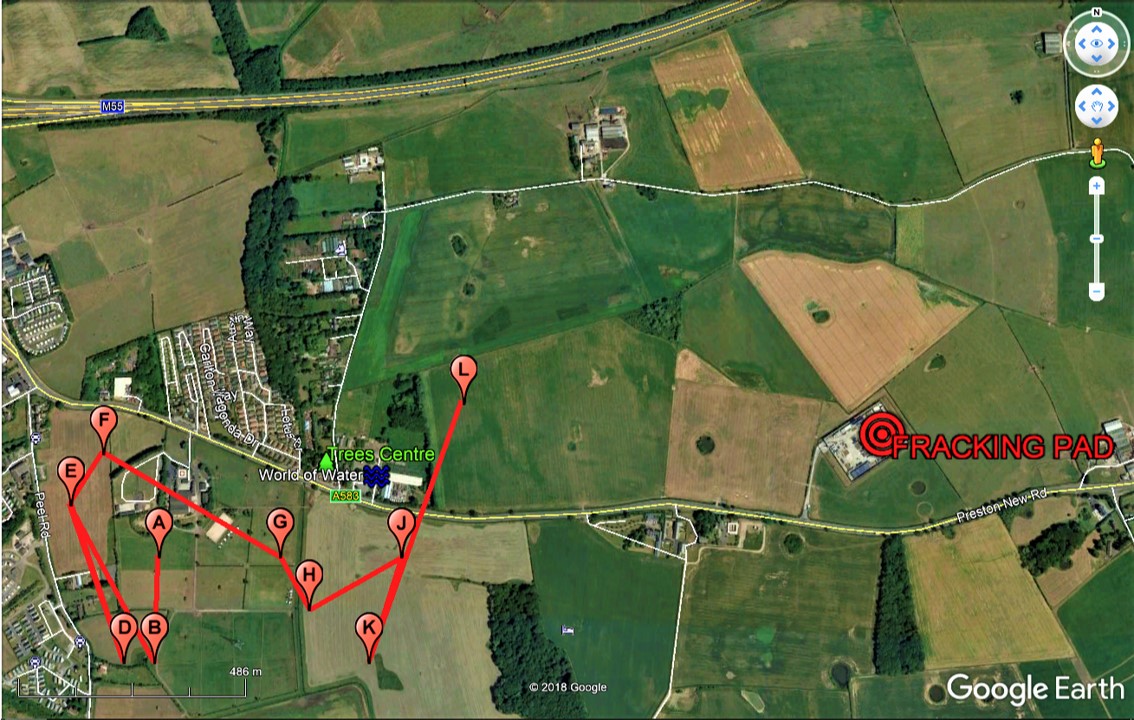 Graphic showing progression of tremors over time. A is the first tremor (18 October) and L the most recent (25 October). Tremors C and E are in almost the same location. Source: Robin Grayson

“People should remember and be reassured that anything registering between 0 and 2.0 on the Richter Scale is generally categorised as a micro seismic event, far below anything that could be felt at surface or cause damage or harm.

“On average around 8,000 micro seismic events are detected in the world every day and very rarely reported in the news. These are truly tiny movements and without the sophisticated monitoring in place at PNR, they would in all likelihood not be detected.

“We’re comfortable that the traffic light system is working as it should. Everything so far has been within our operational expectations, in line with the work we’re carrying out and reported appropriately as part of the Oil and Gas Authority’s traffic light system. All the relevant regulators have been informed.”

The tremor was recorded on the British Geological Survey online list. Initially it was registered as a 0.6ML.

The site went temporarily offline and when it came back the tremor had different location coordinates and a 0.3ML magnitude. The BGS said:

“No events have been removed from our web pages. However our web pages are linked to a database that contains information about all the seismic events that we detect and locate. If the database is changed the web pages will reflect this change.