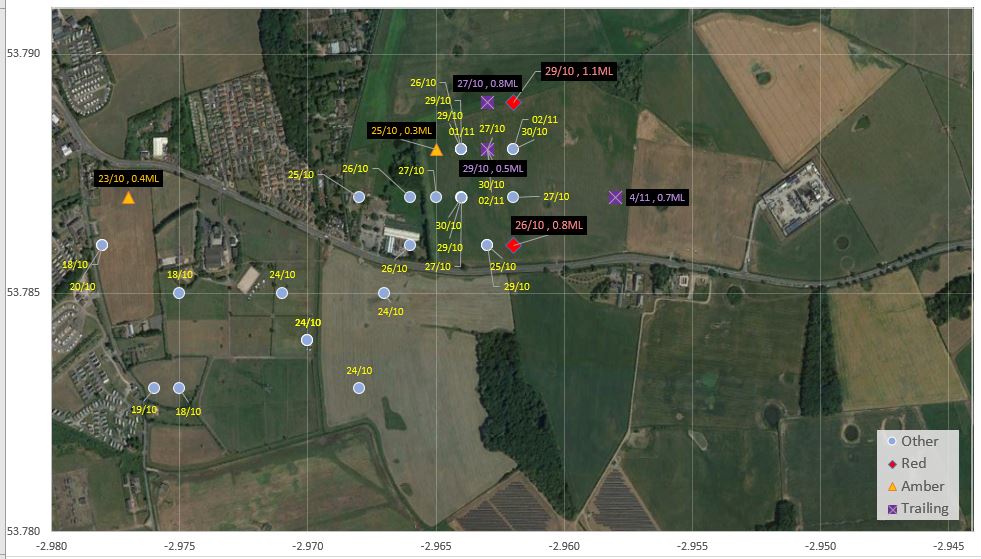 Conservative and Labour MPs in Lancashire have written to the business secretary, Greg Clark, demanding action following a series of tremors linked to Cuadrilla’s fracking operation near Blackpool.

Mark Menzies, the Conservative representing the area around the shale gas site, called for an independent assessment of the well. Gordon Marsden, the MP for the neighbouring constituency, was among six Lancashire Labour MPs who have called separately for a moratorium. The energy minister, Claire Perry, has also answered three parliamentary questions on the issue. 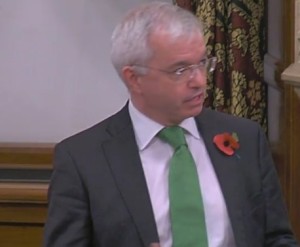 A spokesperson for Mr Menzies confirmed that the MP’s letter was expected to be sent today. It called for an independent investigation into well integrity at the site at Preston New Road.

The letter followed a meeting last week with local campaigners, Bob Dennett and Sue Marshall, at which they expressed concerns about the effect of a series of small earth tremors on the well

They told Mr Menzies that regulations were not meeting the gold standard that had been promised. They pointed to a report by the Royal Society in 2012 which recommended cement bond logs, as well as pressure tests, following seismic events:

“This advice is not being adhered to and they are currently relying on Cuadrilla simply pressure testing the well, so current practice is falling short of the Gold Standard regulations promised.”

They asked Mr Menzies to press for an urgent “comprehensive, transparent and independent well assessment”.

The most recent tremor near Preston New Road was recorded on 4 November 2018, with a local magnitude (ML) of 0.7. It was the closest so far to the well site and the largest since the 1.1ML event on 29 October 2018.

After the 1.1ML tremor, Cuadrilla said well integrity had been checked and verified.

A newsletter from regulators of the fracking site, issued this afternoon, said:

[The Health and Safety Executive] “receives regular reports from Cuadrilla on well pressure and a report detailing operations on the well each week, including integrity testing. HSE’s team of specialist well inspectors inspect these reports to ensure that they are in line with the notification supplied by Cuadrilla before hydraulic fracturing commenced.”

In a separate letter, six Labour MPs in Lancashire and the shadow business secretary, have called on Mr Clark to impose a moratorium on fracking.

“the current government must accept in light of recent seismic activity, that at the very least it would be just and right to halt fracking at this site and place a moratorium on fracking until such point as they can be not just reassured, but fully assured that there will be no more man-made earthquakes in England or Wales as a result of fracking.”

The campaign group, Frack Free Lancashire, supported the MPs’ call for a moratorium, saying local concerns about the tremors had been dismissed.

“Cuadrilla commissioned their own report in 2011 which stated: ‘Stronger events occur when some of the fluid penetrates into faults and in rare cases, events with magnitude up to 0.8 ML have been detected.’

“So there we have it: these events are considered ‘rare’, yet Cuadrilla have been recorded across national press, urging the government to change the seismic trigger regulations further. Cuadrilla have also previously stated: ‘Very little of the fracture fluid actually ever returns to the surface. So when we inject the water in there most of it does not come back’.

“It is clear that Preston New Road is a complete experiment, and one which we are having to live with the consequences – both known and unknown. There have been 36-and-counting seismic events. In only two weeks. The valid concerns regarding the effects of seismic activity (whether felt or not) upon the well integrity and underground infrastructure, are being blatantly dismissed. Who knows what is happening under our feet? From past experience, Cuadrilla certainly don’t.

“This is unacceptable and we have called on central government to implement an immediate fracking moratorium.”

Jim Cunningham (Coventry South) asked about the implications of the seismic activity on government fracking policy (link to question).Ms Perry said the Oil & Gas Authority was “continually monitoring operations around the Preston New Road site to ensure they remain in line with Cuadrilla’s hydraulic fracture plan”. She said the traffic light system for monitoring seismic activity was working “in exactly the way that it was designed to”.

Roger Godsiff (Birmingham Hall Green) asked what assessment had been made of the detection of seismic activity caused by fracking in Lancashire (link to question). Ms Perry made a similar reply, adding that seismic events with a magnitude of 2.0 were usually not felt at the surface. A magnitude 0.5 event was “far below the ground motion caused by a passing vehicle”, she said.

Ms Perry’s reply was also similar to a question from the shadow policing minister, Louise Haigh (Sheffield Heeley), who asked what steps would the government be taking before fracking resumed. Link to question