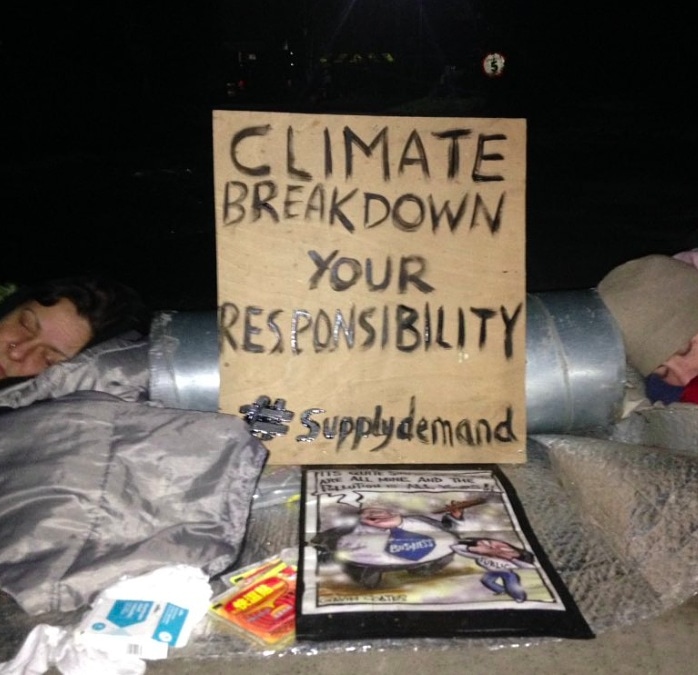 Anti-fracking groups took part in protests at six places across England today against the supply chain and funders of the shale gas industry. 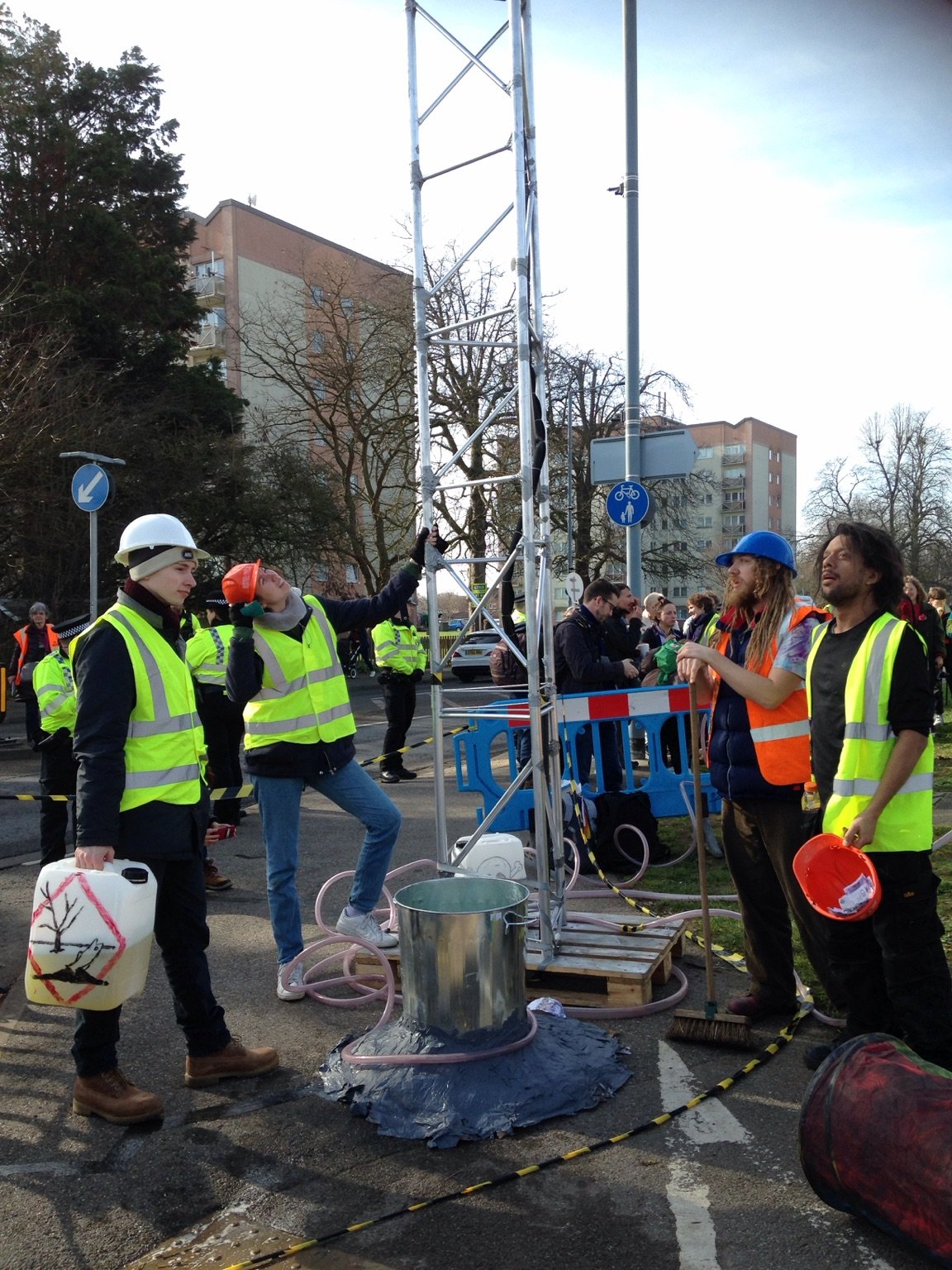 Activists assembled a four-metre model of a fracking rig outside the headquarters of Centrica, which has committed £100m to Cuadrilla’s shale gas operation in Lancashire.

Reclaim the Power said this afternoon more than 50 people took part in the protest, which included 80m of piping, fake money and activists role-playing as industry executives.

‘We’re coming to the end of one of the coldest months of the year, and millions of families around the UK are forced to choose between heating and eating, as British Gas and others announce yet another price hike this week. Meanwhile, their owners Centrica pumped $16m into expensive fracking operations. We need to move away from the Big Six cartel and demand a better system.’

At the time of writing, a two-person lock-on was continuing to prevent lorries entering or leaving a haulage company, which supplies the oil and gas industry.

Three people were initially arrested at the S Lyon and Son site, at Skellingthorpe, near Lincoln. They were charged under Section 42 of the Criminal Justice and Police Act 2001, accused of causing harassment, alarm or distress. Two people taking part in the lock-on were arrested at about 5.30pm and a further two were arrested outside Lincoln police station’s custody suite at around midnight.

Elizabeth Williams, who was at the protest to provide welfare support, said there were a maximum of 10 people at the protest during day. She said the police presence was disproportionate, with five police tactical support vans and a police car at the scene. She said:

“I was standing opposite the site on the verge with a banner. I wanted to provide reassurance to motorists that this was a peaceful protest, not the scene of a nasty accident. I was told by police to move on with my banner or be arrested.”

Ms Williams said the action had allowed cars to enter and leave the depot.

“I cannot believe that we are being accused of harassment. The staff at the company are laughing and joking. We were often the recipients of harassment and angry jibes.

Lincolnshire Police have confirmed that seven people were arrested and charged following the demonstration at Skellington, near Lincoln.

One person has been charged with common assault.  Together with four others, he has also been charged with failing to comply with police requests to leave the area.  All five have been bailed to appear at Lincoln Magistrates on March 13.

In addition, one person has been charged with assaulting an emergency worker.  Together with one other, she has also been charged with threatening behaviour.  The two have been bailed to appear at Lincoln Magistrates on March 14. 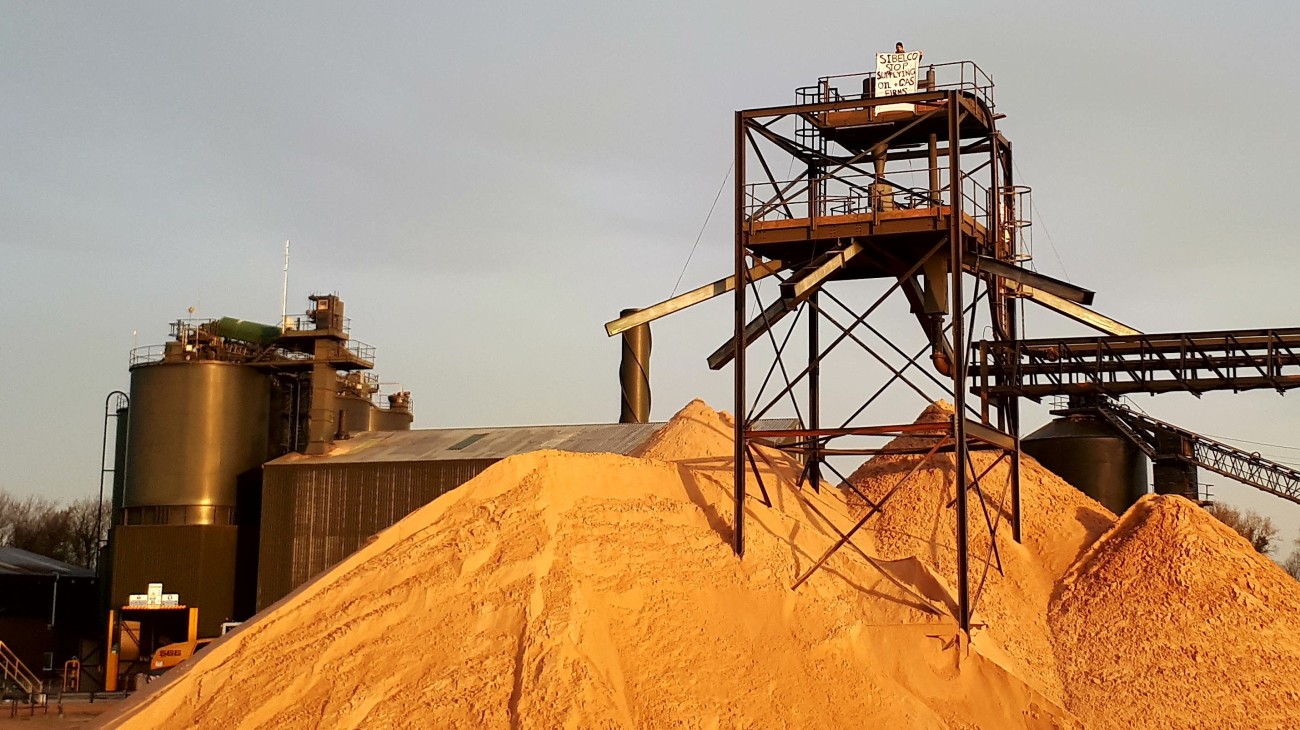 Protest at the Sibelco quarry near Congleton in Cheshire

Reclaim the Power, Extinction Rebellion and Frack Free Leeds took part in a demonstration outside the branch of HSBC in the city centre.

The bank has a 11% stake in IGas, which has shale gas exploration licences across the east midlands and north west England.

Families held a picnic inside the HSBC bank in Cambridge, while outside there were banners saying, ‘Fossil Banks No Thanks’.

More than 50 people were reported to have taken part in an event at the depot of Scottish energy company, SSE. They objected to the company planning to build three new gas-fired power stations across the UK.

Terry, who took part in the SSE protest, said:

“Building new gas plants will not provide secure, long-term jobs or bring down energy bills; a thriving renewable energy sector will. New gas plants will also blow our carbon targets and lock us into a recklessly dangerous fossil fuel future.”

Jess Farmer, from the campaign group, Reclaim the Power, said:

‘Fracking companies like Cuadrilla are polluting local communities and ignoring the force of democratic opinion against them.

“We’re taking action today across the UK to highlight the crucial role Centrica and HSBC play in funding fracking, locking us into fossil fuel dependency and climate breakdown.

“It’s time for companies to realise that they cannot continue with business as usual. Local communities need clean, affordable and publicly-owned energy in warm, well-insulated homes. To tackle climate change we must put an immediate end to fracking and focus on creating a just transition away from fossil fuel that puts workers in polluting industries at the centre of the conversation.”