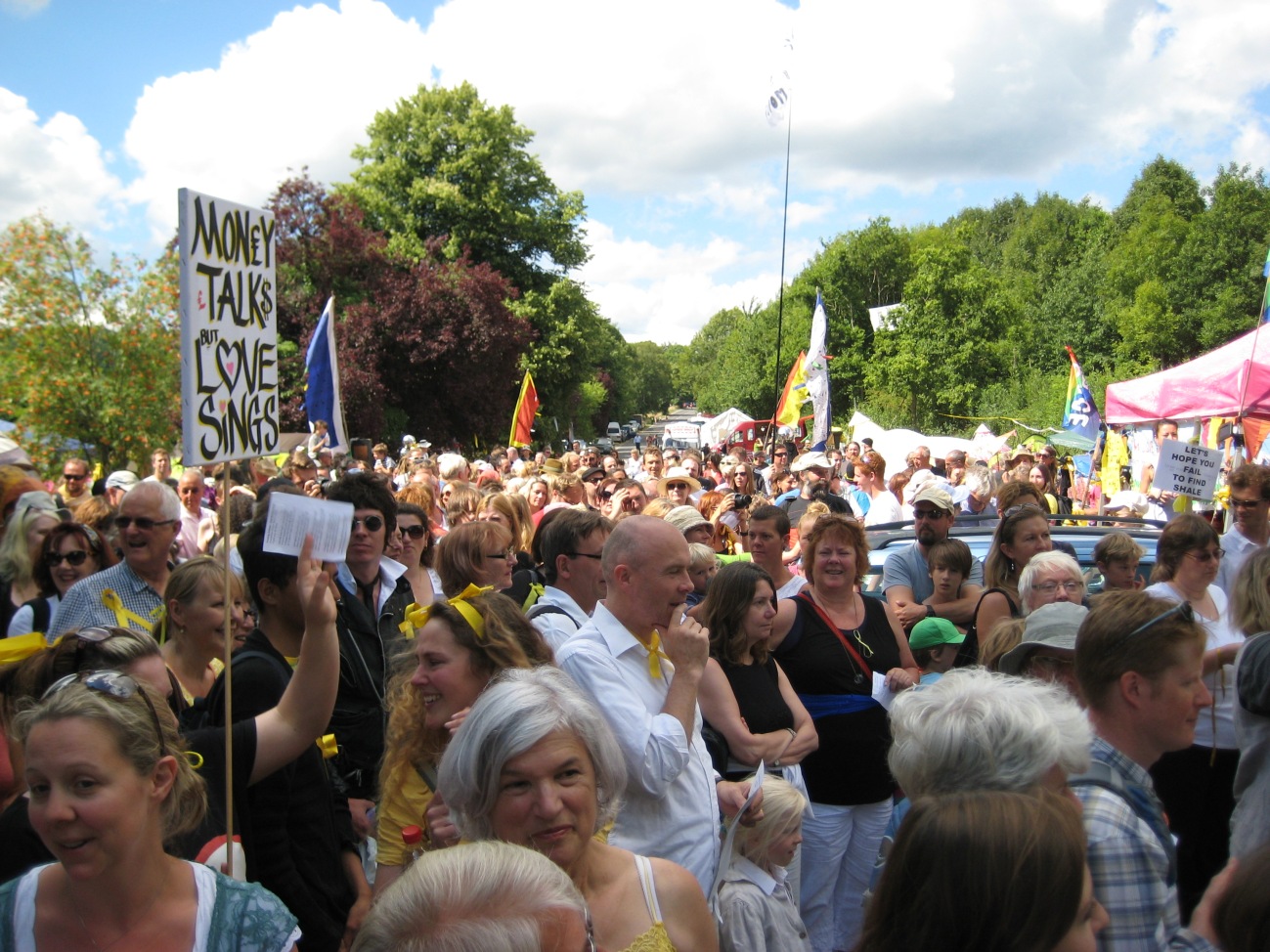 Opponents of oil operations at Balcombe in 2013, when the then operator, Cuadrilla, drilled at well near the village. Photo: Used with the owner’s consent

Helen Savage, who has campaigned for more than seven years against oil exploration and production at Balcombe, said:

“I am delighted that the planners at West Sussex County Council have recently recommended that Angus Energy’s application for a 3 year flow test at Balcombe be refused.”

In an open letter, she said there were “serious environmental concerns” about the proposed Balcombe well test.

And she accused oil and gas companies of often displaying “a cavalier attitude” to the environment they were working in.

Angus Energy’s application was due to be decided next week by the West Sussex’s planning committee. But the day after the publication of the planners’ recommendation, the council announced the meeting had been cancelled because of coronavirus.

The planners’ report had concluded that the Balcombe test would compromise the protected landscape of the High Weald area of outstanding natural beauty and establish a continued presence of industry which was ”not appropriate to the area”.

The recommendation also said the application was “not in the public interest” and would be of “minimal benefit to the local economy”. There was also scope to meet demand for hydrocarbons outside protected landscapes, it added.

Angus Energy described the recommendation and cancellation of the meeting as frustrating. It said it would use the delay to “present further information to the planning officer which we believe may have a bearing on the final recommendation and decision.”

Ms Savage, a member of the association, said the review concluded that the Angus’s assessment lacked baseline data to assess properly the risks to groundwater and were subjective in the data it used.

“They found that ‘more frequent and more thorough sampling’ would be needed to judge groundwater quality.

“They concluded that ‘both the understanding of risk to the groundwater systems and the proposed mitigation to protect these……….systems is wholly inadequate’. They also found that ‘there are possible breaches in the cement seal’ of the well which presents a risk to groundwater quality’.”

Angus Energy proposed to use hydrochloric acid to improve the flow of oil in the well. Ms Savage said:

“The independent review said it is ‘not appropriate to state that HCL is a non-hazardous substance to groundwater’.

“This confirms just one of the serious environmental concerns we have been highlighting in Balcombe and we hope the planning committee will also consider it sufficient risk in itself to refuse the work going ahead.

“It also illustrates the cavalier attitude too often displayed by oil and gas companies to the environment they are working in.”

West Sussex County Council said all its meetings had been cancelled until the end of April. Decisions on planning applications due to be considered during this period would be postponed. A spokesperson said:

“They should come to a meeting at a later date once we know when we will resume the meetings.”