They have also criticised its chairman, Thirsk and Malton MP, Kevin Hollinrake, of being a cheerleader for fracking companies.

Mr Hollinrake, whose constituency includes the approved fracking site at Kirby Misperton, defended the group, saying it was taking evidence from all sides of the argument.

He also said he had done more than any other MP to ensure shale gas exploration was appropriately regulated and planned for.

The All Party Parliamentary Group on shale gas regulation and planning is meeting this afternoon (7/9/2016) to discuss compensation for communities where fracking takes place.

Anti-fracking campaigners have complained that only one of the seven witnesses invited to give evidence is from a shale gas community. Another five are from shale gas and infrastructure companies. 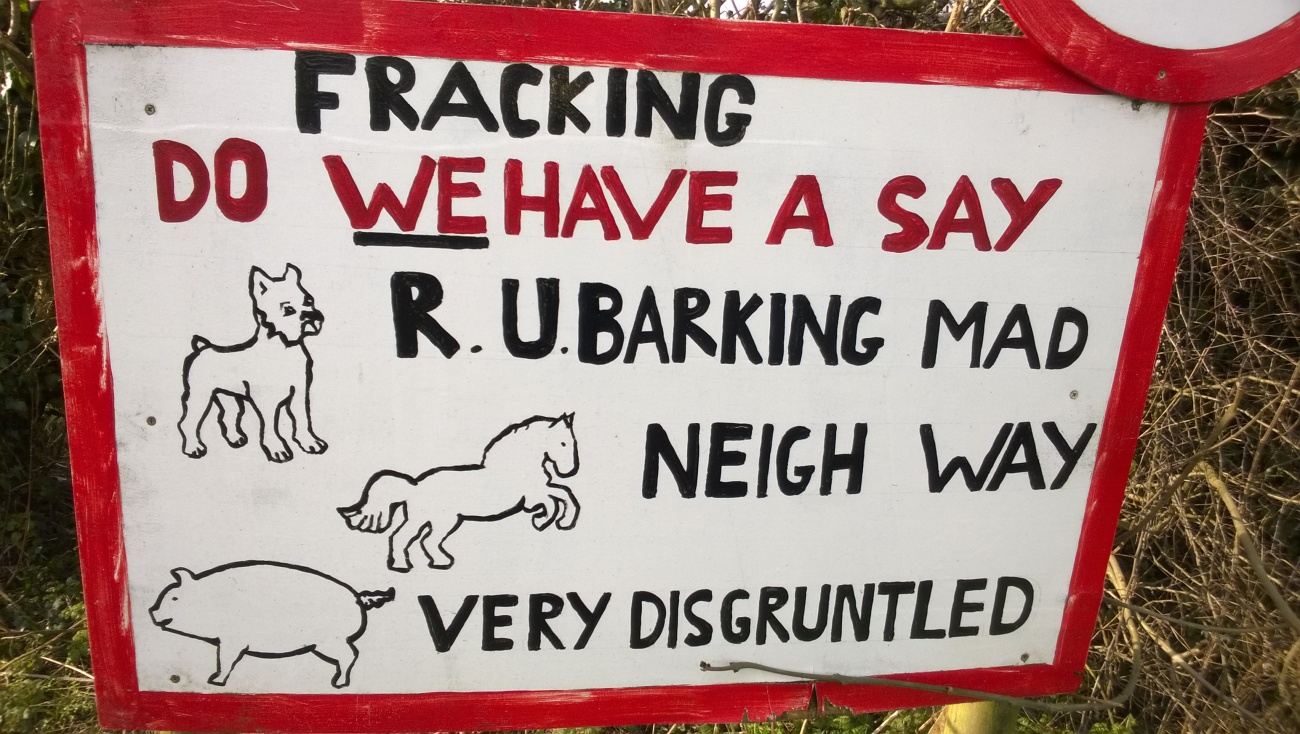 “Given that two fracking planning applications in Lancashire are to be decided on or before 6th October, it’s deeply unsettling that neither of these two communities have been asked to appear at this industry-dominated event. This APPG seems nothing more than a cheap PR outfit for a struggling industry that is desperate to make industrial gains within rural communities.”

Roseacre Awareness Group, which represents people living near Cuadrilla’s other Lancashire site at Roseacre Wood, sent written evidence to the APPG in the summer but was not invited to attend today’s meeting. Its evidence included the following statement:

“There is a widespread feeling that communities in which responsible and reflective citizens have actively engaged in a process at considerable personal cost are deemed irrelevant; belittled, demonised or ignored. There is a dangerous and growing sense of disenfranchisement unhealthy in any democracy.”

“With a decision by the Secretary of State imminent on the two sites in Lancashire, and an ongoing consultation on the derisory Shale Gas Wealth Fund we sincerely hope that our views will be seriously taken account of. Our communities are representative of the many thousand who will be affected should this industry take hold.”

Yesterday afternoon, a spokesperson for Roseacre Awareness Group said the group had been invited to present evidence at a meeting of the APPG in November.

“It seems incredible that only one person from fracking-impacted communities has been invited to give evidence, against five organisations that would all benefit financially from fracking. The APPG is clearly nothing more than a cosy shale gas industry lobby group, set up by their chief cheerleader Mr Hollinrake to help pave the way for fracking in the UK.”

“We question whether it is legal or ethical for an ardently pro-fracking MP to fund his own APPG on fracking. The fact that Mr Hollinrake is also Permanent Private Secretary to the Leader of the House of Commons, David Lidington MP, is also cause for concern, particularly as Mr Hollinrake appears to be working on behalf of the fracking industry, not his constituents.”

“The fracking industry and pro-fracking MPs can discuss compensation payments in the corridors of Westminster all they like. The message from communities threatened by fracking is loud and clear – we don’t want fracking at any price.”

“No amount of money could compensate residents for the noise, disruption, air pollution potential health problems and water pollution that the fracking industry will bring to affected communities.”

Mr Hollinrake said the purpose of today’s meeting was to gather evidence. It was one of a number of meetings of the APPG to be held in 2016 and 2017. He said:

“Over this period we will be inviting a range of contributors to give evidence from all sides of the argument.”

He said today’s meeting had allowed one-and-a-half hours for evidence and the numbers of witnesses had to be limited. But he said “it does include Rt Revd Graham Cray who will speak on behalf of those opposed to fracking.”

Referring to the previous APPG meeting where two short statements were read on behalf of people from North Yorkshire and Lancashire, Mr Hollinrake said:

“We have already taken evidence from community groups in Lancashire in the last session in June and from Greenpeace and we welcome written evidence at any time.”

He said that the November meeting would focus on community issues and be extended to hear from as many people as possible. The agenda currently included the Mars Parent Group from Pennsylvania and Roseacre Awareness Group.

“It is completely wrong to suggest that I am the cheer leader for the industry. The decision to go ahead with fracking was made democratically in the House of Commons in January 2015 by a large majority of over 250 votes. Since then I believe I have done more than any other Member of Parliament to make sure we regulate and plan any exploration appropriately, This work has included: successfully calling for the banning of surface drilling in protected areas (National park, AONB and SSSI’s) holding debates and asking numerous questions in the Commons. I shall continue to work tirelessly to ensure that the regulations are in place and adhered to and, if issues arise, I shall call for a moratorium.

“I also set up an All Party Parliamentary Group on Shale Gas Regulation and Planning to recommend an effective regulation and planning regime if fracking goes ahead. The aim was to address the many and varied issues relating to fracking and in particular those that concern local people. It gives us an opportunity to ensure that all issues are properly discussed and taken into consideration. Proposed measures will include independent supervision of regulations; a robust ‘local plan’ for fracking covering the potential for a longer-term rollout; detailed solutions for concerns such as traffic plans, distance from schools, town and villages and impacts on other important parts of our economy; real time, publicly available environmental monitoring and confirmation that community financial benefits will go directly to communities affected.

“We are able to use a room courtesy of the House of Commons and everyone who attends comes at their own expense so, apart from the administration which is done from my office, there are no costs.”

DrillOrDrop will be reporting from this afternoon’s meeting.

Updated 1.50pm on 7/9/2016 to clarify that Roseacre Awareness Group had not been invited to today’s meeting (and please see comment from the group below)