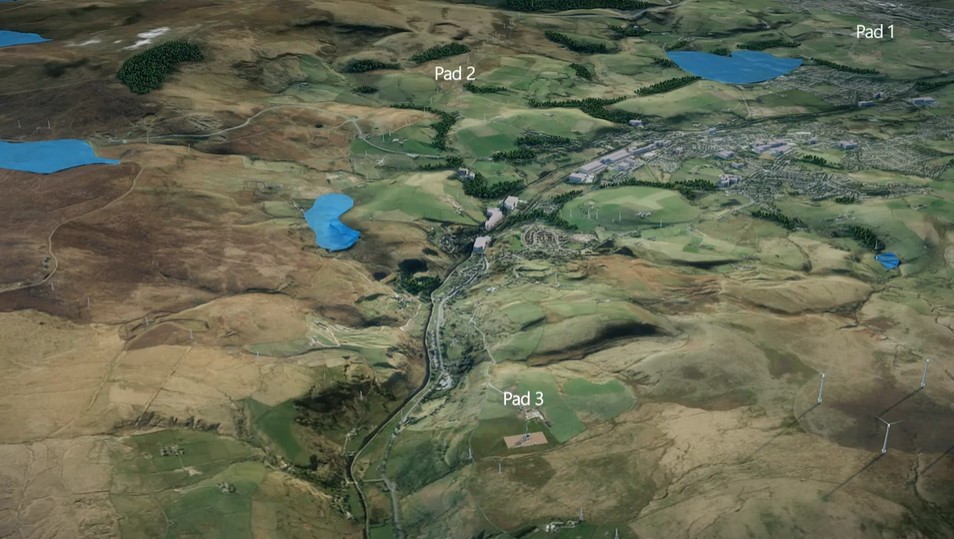 A long-awaited visualisation of what shale gas production could mean for the UK countryside has been released by the fracking industry.

The Thirsk and Malton MP Kevin Hollinrake, who asked for the visualisation at a meeting with the industry in February last year, said it could build confidence among residents in shale areas.

But opponents of fracking, who have been waiting for the release for more than 11 months, dismissed it as misleading and unhelpful. 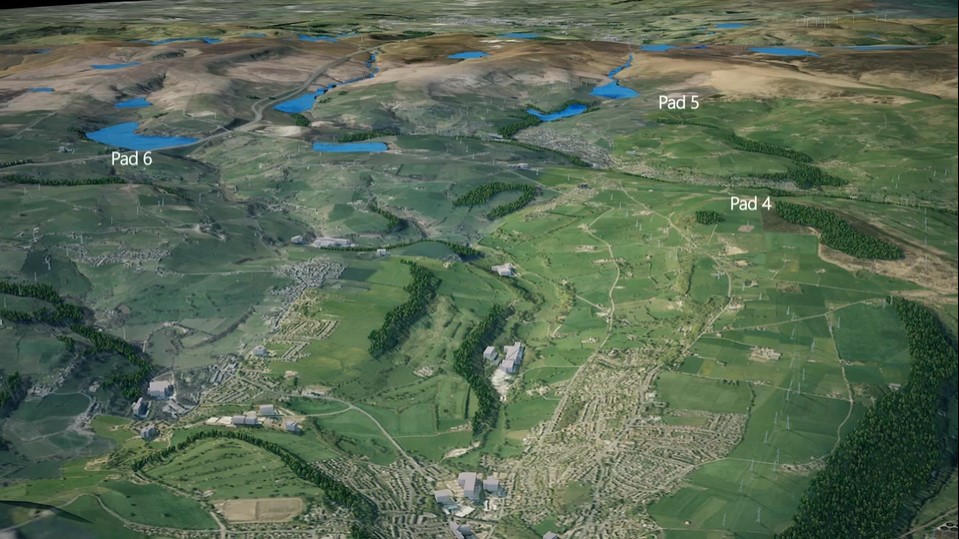 The work, commissioned by the industry body, UK Onshore Oil and Gas, is a 5-minute 3D video of two petroleum exploration and development licences, said to be typical of shale gas areas. It is accompanied by a report “Developing Shale Gas and Maintaining the Beauty of the British Countryside“. 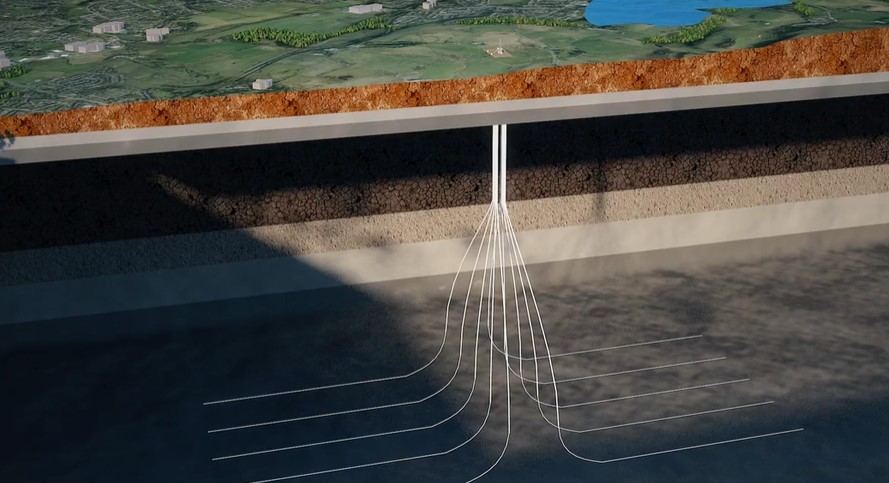 UKOOG said the video demonstrated the low impact of potential shale development in the UK. It compared drilling rigs favourably with the height of wind turbines and transmitter towers.

“We estimate that approximately 400 well pads developed across the UK between 2020 and 2035 could reduce our gas import dependency by at least 50%. This compares to 88,000 pylons, 9,000 municipal waste water treatment facilities and 5,300 individual wind turbines that already exist.

“Producing sites will involve a temporary construction and drilling phase and will have no permanent drilling rigs or other tall structures and will be quiet and, with screening, not visible.”

But opponents said the visualisation did not show the infrastructure that would accompany shale gas well pads, such as new roads, waste tanks, pipelines, processing plant, compressor stations and treatment centres.

They also said the number of pads and wells was far lower than that predicted by Cuadrilla in 2015 for one of its licence areas (40 wells per pad and 80-100 pads in PEDL165).

Kevin Hollinrake said he had asked for a visualisation to answer questions from constituents about what fracking would look like in North Yorkshire. He told DrillOrDrop:

“I am happy with it as an illustration. I think there’s still some detail that we’ve got to get right in terms of the defining guidelines and defining policy.”

Asked if it would convince people, he said:

“Somebody who is open minded, as I am, I think it will build confidence, which is the reason we asked for it to be done.

“We wanted the reassurances that this could be done properly. We needed to see a tangible and visual illustration so it will be interesting to see the feedback that we get.

“People who are concerned or who are open minded, hopefully, they will feel that this is a useful illustration of how things can be.”

But members of Frack Free Ryedale, a campaign group opposing shale gas in the area between Malton and Pickering, were not convinced by the visualisation.

“What about showing all the pipe laying, compressor stations, processing plants and all the new waste treatment plants they will need.  And there doesn’t appear to be any access roads which scar the landscape badly.”

Jo’s husband, Steve, described the visualisation as “professionally done, but just not credible”. He said:

“The animation shows 2 PEDL licence areas, yet only shows a total of 6 well pads. This conflicts with industry telling us “only” 10 pads per licence area. So roughly a third of what they’re admitting to now.

“Professor Andy Aplin’s view (Durham University), based on international experience, is that 33,000 wells across 5,000 pads would be needed to make us self-sufficient in gas. This seems to be an order of magnitude discrepancy in well numbers. “

David Davis, a claimant in the High Court challenge to the decision to allow fracking at Kirby Misperton, said the visualisation was a poor representation. It did not, he said, show noise attenuation barriers around sites while the screens of trees, which appeared to grow very quickly in the visualisation, would take 20-30 years to reach that height. He said:

“Given that the conventional sites in Ryedale are much closer together than the ones on the visualisation one can only remain sceptical of the likely true extent of well density.”

He added that drilling time would be difficult to reduce on a multi-well pad because two rigs working at the same time would exceed allowed noise levels.

“This is a highly selective glossy PR exercise with a so-called bird’s eye view that is unrealistic: more like cloud cuckoo land.

“What about the dreadful 24/7 drilling noises needed for thousands of wells, instead of the mood music of this video specifically designed to distract residents from the dreadful reality of living next to the drilling of a fracking well in the middle of the night?”

“This is singularly unhelpful. If I was Kevin Hollinrake I would be very embarrassed that a presentation that could have been knocked up in half an hour on a home computer has taken a year to complete and at the end of the day tells us nothing except that in the producer’s opinion there is less visual impact than the alternatives. If Kevin Hollinrake was in my class I would tell him to go home and do his homework again!”

“What concerns me about this short film is that it is clear that fracking will take place near to environmentally sensitive bodies of water. From exploration, drilling, lifting, transportation and eventual disposal of contaminated sludge, absolutely no indication is given as to how such precious water resources will be protected from the toxic effects of the entire fracking life-cycle.

“I can only conclude that this is yet another desperate attempt from an industry keen to win public acceptance. The general public is already highly sceptical of the claims made by the fracking industry. The frackwash presented in this film is unlikely to convince many.  I doubt very much that the English general public will be hoodwinked by such industry propaganda.”

“Industry not in charge of the process”

Mr Hollinrake said the shale gas industry should not decide on well density.

Asked by DrillOrDrop about the disparity in the number of wellpads between the video and report, Mr Hollinrake said:

“I don’t think it matters what the [shale gas] producers say, what the industry says, they should not be in charge of this process.

“I’m grateful to them for producing the visualisation but in terms of the restriction that should apply to shale gas exploration and development that must be through regulation, through planning regulation and environmental regulation. We don’t have to ask the producers not to over-develop, we tell them through the planning process.”

The draft minerals local plan for North Yorkshire had proposed a maximum of 10 wellpads in a 10km by 10km area. Mr Hollinrake said this could be reduced to five or six well pads because of restrictions of protected areas, towns and villages and poor access. Mr Hollinrake said:

“If there was a perfect PEDL licence area that was 100 sq km area that had no issues about access, no protected areas, no villages in it, then you probably could get 10 pads. But realistically, you take all those things into account you’re going to be looking at a lower number, it could be five or six. It would depend on the area.

“Hopefully other local authorities will adopt the North Yorkshire approach: that government and local authorities set the criteria, rather than the industry. I think that’s absolutely crucial that representatives of the local area have the ultimate say in this.”

“Developing Shale Gas and Maintaining the Beauty of the British Countryside”