An open letter from two doctors has accused the energy minister, Claire Perry, of using Cuadrilla’s fracking site near Blackpool to study the impact of toxic chemical emissions on people. Consultants’ letter to Claire Perry

Dr Barbara Kneale, a consultant in occupational medicine, and Dr Francis Rugman, a retired consultant haematologist, said the “experiment” was without the informed consent of residents.

They called for an immediate moratorium until there has been an evaluation of all the evidence on health, safety and environmental issues on fracking.

Cuadrilla received government approval last month to frack the UK’s first horizontal shale gas well at the Preston New Road site at Little Plumpton. It has since applied to frack a second well. The process is expected to begin in weeks.

Claire Perry giving evidence to a select committee on 21 May 2018. Photo: Parliamentary TV

The doctors, both opponents of fracking, pointed out in their letter that Ms Perry announced the consent three days before the publication of a government report from 2015 on the impacts of shale gas extraction on air quality. Link to report

It also stated that US studies have shown significant adverse impacts on both local and regional air quality.

Dr Kneale and Dr Rugman drew attention to a comment in the report that UK evidence on the impact of emissions could be collected solely by studying the first commercial wells.

“The only conclusion that can be made is that the Cuadrilla site at Little Plumpton will be used as a prospective observational study to monitor emissions of toxic chemicals, known to adversely impact human health.

“This experiment is to proceed without the informed consent of the impacted close residents, some of whom live at only 350 meters from the site.

“Many question whether such an experiment complies with ethical guidelines.”

“This is not ‘gold standard’ regulation. Are human receptors (ie Fylde residents) to be used as ‘guinea-pigs’?”

The doctors said a review of the impacts of shale gas extraction by Public Health England had, in effect, given the government “written permission” to proceed with fracking. The review concluded that fracking was a low risk to public health if it was regulated properly.

But the review was “widely considered by experts to be of questionable credibility and was severely criticised at the time of publication”, the doctors said.

They added that Public Health England (PHE) was aware of the air quality report because a named assessor and observer from the agency was involved in its production. Despite this, PHE has refused to update its own review. 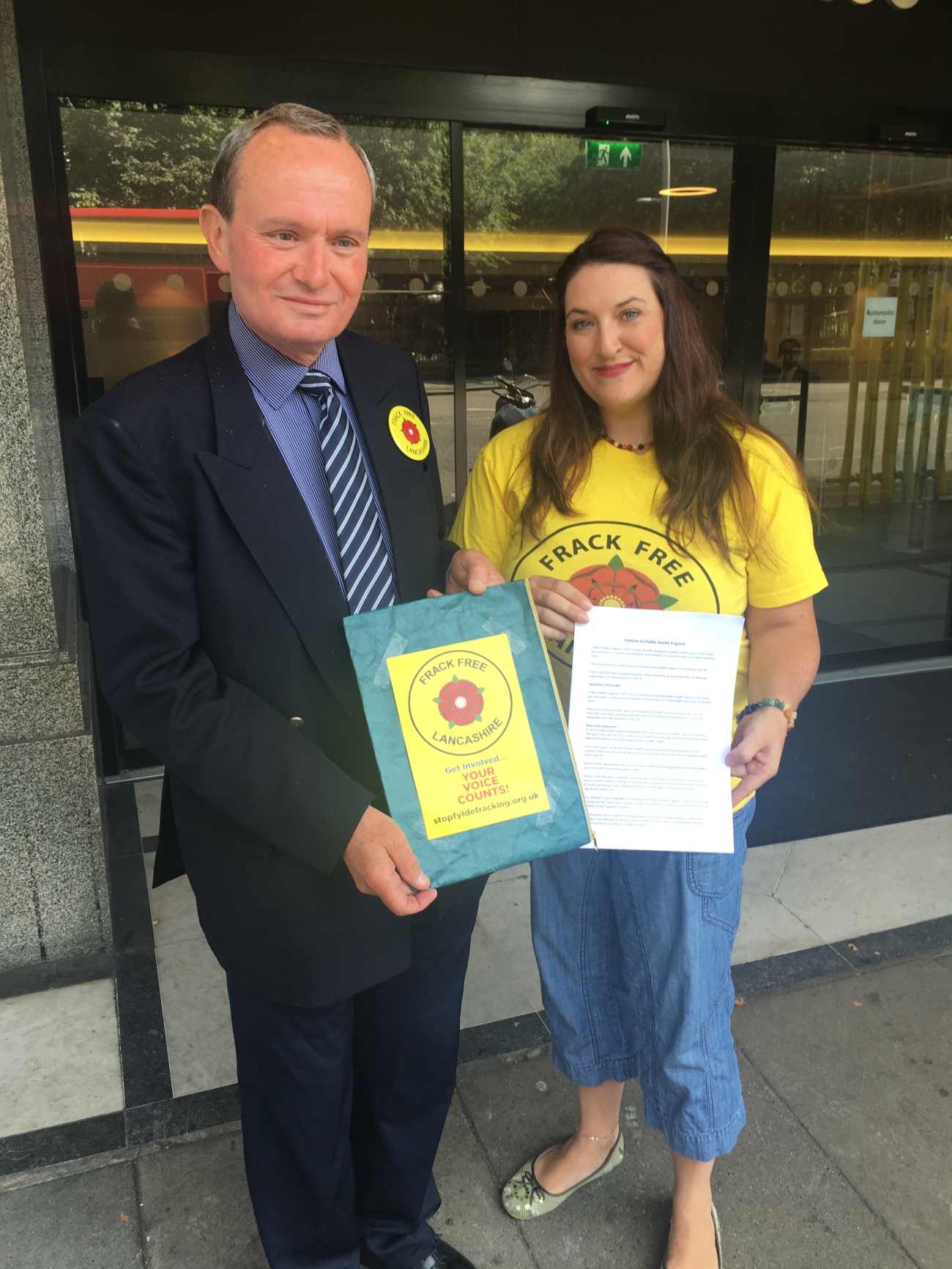 Dr Kneale and Dr Rugman said the primary purpose of PHE and other regulators was to protect public health and safety. But they said:

“There has been no consideration for health monitoring of the local population [at Preston New Road]. Without detailed baseline and continuous monitoring of the close residents, any observed adverse impacts on health may be invalid.”

“In 2018, there is now abundant and accumulating evidence from the USA, of the potential harm, not only from the release of toxic volatile organic chemicals, but also from breathing in the diesel exhaust micro-particle PM 2.5 emissions from the numerous on-site diesel compressors and associated heavy diesel truck traffic.”

Studies had also highlighted risks from dust from fracking sand and thermal injuries from fires or explosions, the doctors said. Proximity to fracking sites has been linked in US research to increased hospital admissions and dermatological and respiratory symptoms, as well as worsened asthma, low birth weight and pre-term births.

There is no setback distance in Lancashire between fracking sites and homes, the doctors said. Nor has a specific emergency evacuation plan between described or published, they added.

“We believe that PHE should consider all the high-quality evidence since 2014 and update their report as a matter of urgency.

“We believe there should be an immediate moratorium on fracking until a transparent review takes place to evaluate all the health, safety and environmental issues.”

The Department of Business, Energy and Industrial Strategy said in a statement:

“Shale gas has the potential to be a new domestic energy source, further enhancing our energy security and continuing our transition to a lower-carbon economy. It also has the capacity to deliver substantial economic benefits, both nationally and locally.

“The UK has world leading regulation to ensure that shale gas can be explored safely and ensure there is no risk to public health.”

A statement from the industry body, UK Onshore Oil and Gas, said:

“UKOOG are concerned that the authors of the letter to Claire Perry have not fully understood the regulatory process in the UK. A hazard by itself does not constitute a risk; it is only when there is a hazard source, a receptor (i.e. a person or population) and a pathway of exposure connecting the two that there is any potential for risk to health. This letter also makes several far reaching claims about declining air quality in the US. However, according to the US Environmental Protection Agency, emissions specifically referred to in this letter – such as NOx, PM2.5 and sulphur dioxide – all fell in the USA from 2000 – 2017, by 35%, 41% and 79% respectively. This is thanks to the increased consumption of natural gas, as the US moves to eschew highly-polluting coal.

“The protection of human health has been a fundamental principle to Environmental Impact Assessments (EIA) since its initial inception in 1969, through to the recently amended European Union EIA Directive which strengthens the existing legislation and makes the EIA process even more demanding. The potential hazards associated with onshore oil and gas are well understood; and are not unique to this industry. Appropriate design is the primary mechanism to control all potential hazards which are then addressed through the UK regulatory planning and permitting process.

“There have been a number of reports on health issues in England, Scotland and Wales all of which have concluded the risks are low and manageable in a properly regulated industry. The objective and outcome of the planning process is that the source-pathway-receptor linkage is either removed by design, such that there is no potential for health risk (avoidance), or where this is not possible, the regulatory regime controls and minimises emissions in order to achieve a high level of protection for the environment and human health (mitigation).

“The 2015 air quality document referenced acknowledges that the data is out of date and that a number of processes have already been put in place by industry and Government to monitor and publicly report emissions at our sites, which, incidentally, were the subject of the recommendations in the report.

“This monitoring is carefully regulated using environmental permits administered by the Environment Agency. The report also notes – as many reports have done in the past – that the UK has different geology and superior regulation from the countries that data has been collected from to date. There is a need for a UK evidence base under UK regulation within UK geology which we as an industry are committed to delivering.

“We have a choice: import higher lifecycle emission gas from overseas, or produce it here at the benefit of our climate, UK jobs, tax revenues and community investment.”