They describe the current rules as “vague, flawed and open to abuse”, risking induced seismicity and potential groundwater pollution. Oil companies in the Weald basin should be required to provide detailed plans and reports of their operations, they say.

Brockham Oil Watch, a residents’ group which monitors the industry in the region, said:

“This is another huge loophole in the “gold standard” regulatory system that needs to be urgently closed.”

Acid is used in the industry in a variety of techniques to improve the flow of oil. The techniques range from cleaning the well and voids in the rock, to stimulating oil flow by opening or creating fractures.

Brockham Oil Watch’s concern centres on techniques that pump acid into a well at pressures below that needed to fracture rocks – the level known as the fracture gradient or fracture pressure.

A series of requests for information by the group has confirmed that where the pressure is below the fracture gradient, operators do not have to comply with key regulations required for fracking.

The requests have also revealed that where operators say their purpose is solely to clean the wellbore, there is no requirement to send information to the regulators on the volume of acid or the pressure used at particular times and locations.

But without this information, the campaigners argue, regulators cannot independently confirm what techniques have been used.

“The regulators are not able to verify when fracture pressure has been met unless they are provided with adequate reporting, but reporting is not required so long as the operator says it is not intending to apply fracture pressure.”

Photo used with the owner’s consent

Acid and the Kimmeridge formation

The use of acid at oil sites had previously gone largely unnoticed by the public. But it is attracting increasing attention in the Weald now that oil companies are exploring in rocks in the Kimmeridge formation. Angus Energy is preparing to appraise a well drilled in the Kimmeridge at Brockham, while Horse Hill Developments Ltd (HHDL) has a flow test underway at its site near Horley.

The Kimmeridge rocks are dominated by shales and are known as “tight” or low permeability. One method for creating or enlarging fractures in the shale to improve the flow of oil is initially to dissolve the rocks with acid.

“Acid stimulation can be done at below fracture pressure, and so entirely escape the regulations and reporting currently required for fracking.

“This also allows the drillers to call their operations ‘conventional’ and to avoid the local communities’ overwhelming disapproval of fracking or fracking-like operations.”

At Horse Hill, the oil site near Horley, HHDL said it intended to carry out an acid wash on its exploration well. This technique is used to remove debris from the wellbore or material clogging the natural voids in the rock formation.

The Environment Agency (EA) told Brockham Oil Watch that an acid wash was not considered to be stimulation and was not covered by requirements under an environmental permit. The EA said:

“As a result, the environmental permit for Horse Hill does not require detailed information on the amount, pressure and volumes of acid used in specific formations at specific times. We do not require the operator to report the information.”

The EA confirmed that for Horse Hill it did not hold information on:

The EA also confirmed there was no requirement in the environmental permit for regular reports on volumes of fluid and pressures or information on when a treatment was carried out.

The regulator said the intended acid wash was understood to be “occasional” and so it had not assessed the total cumulative volume of acid that could be used in repeated or multi-stage treatments.

Asked how the use of low pressure in an acid wash was enforced, the EA said:

“There is also no numerical limit or calculation that we use to determine those activities that do not need a permit. It is a determination based on ‘intent’ as well as volumes to be used.”

Asked how the distance that acid penetrated into the rock formation was verified, the EA said:

“If it is to remove a build-up of precipitate or debris in the near-wellbore area then it may be acceptable to regard this as an acid wash. If the intention is, however, to enhance the natural porosity in the wider formation then this would clearly be stimulation.

“In the simplest terms an acid wash would be considered to be near-wellbore maintenance activity that would clearly carry a low environmental risk.”

The EA added that its staff checked, during site inspections, how often acid was used. They would confirm that equipment and chemicals were in line with what would be expected for acid wash activities. Acid wash sites would have relatively small volumes of acid and different equipment compared with sites which were using acid at higher pressures, the EA said.

Brockham Oil Watch asked the EA about what should happen under the rules to wastewater resulting from acid treatments. The EA replied:

“The fluids returned to surface from an acid wash type activity would be considered to be water containing substances resulting from the exploration and extraction of hydrocarbons so could legally be combined with produced water and injected in a permitted reinjection well.”

Asked whether this also applied to matrix acidising, which applies more pressure than an acid wash, the EA said: “the waste code would be the same”.

The Health and Safety Executive (HSE) told Brockham Oil Watch it should be notified by a site operator about:

“any well operation that could result in an accidental release of fluids from the well or reservoir to which it is attached. This would include well stimulation operations.”

But the list of information required for the notification does not include volumes of acid or other chemicals or the pressures used.

The notification of the well testing programme at Horse Hill, which included a contingency for acid treatment, did not contain information on volumes, pressures or other numeric limits on stimulation activities.

The HSE added that for the Horse Hill site:

“no notification has been sent to us regarding any acid treatments or any other activities at this well.”

“Acid washes and matrix acidisation and other completion treatments using acid that are not engineered to be above the fracture pressure would not routinely need to be described in the application for approval to complete the well unless we considered them to be of particular significance for the well in question.” 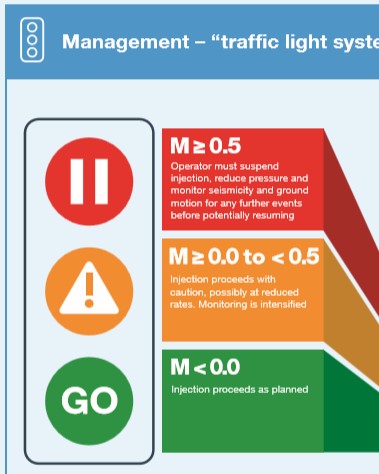 The OGA said operations using the injection of significant volumes of fluid above fracture pressure would be considered to be hydraulic fracturing. They would require a hydraulic fracture plan as part of the application for approval to complete the well.

Under the hydraulic fracture plan, the company would be required to report the injected volumes and pressures. It would also be expected to include a real-time traffic light scheme for monitoring local seismicity.

The OGA and the HSE have both confirmed that they do not hold information on the total number of well stimulations onshore.

“Until the recent increased public interest in hydraulic fracturing, well stimulation was regarded as a routine aspect of well operations, and was not subject to specific consent, and its use may not have been systematically recorded.”

“We may hold some of this data, but as HSE does not collate this information, it would be manifestly unreasonable to check each individual onshore well file to see if we have any information within scope or not.”

Brockham Oil Watch has said the UK regulators should follow the example of California and treat all stimulation methods equally, regardless of how much pressure was used. The group also said no flowback from any form of stimulation should be reinjected.

“Operators should be required to produce well stimulation plans, as opposed to hydraulic fracturing plans that we have currently. They should provide detailed reporting of operations that were actually carried out.”

She said the reports should include the total volume of water, acids and other chemicals.

“This is the only way to evaluate fully the impact, particularly on horizontal wells that will require multiple treatment stages. Currently, only vague proposals based purely on the operator’s intent are required.”

She described the exclusion of chemicals from controls under the environmental permit as “a paper-based exercise and open to abuse”.

“There is no monitoring of what actually takes place other than site visits and on-site document check.”

On induced earth tremors, she said:

“The traffic light system for monitoring of seismicity should be extended to all pressurised injections and reinjections, because it’s been proven that earthquakes can be caused by increased pore fluid pressure.

“We know that the Weald is a seismically active area. Yet, currently there is no requirement for even the basic reporting of when injections at oil sites in the region are taking place, making any analysis of causal links very difficult.”

On waste from acid treatments, she said:

“We believe that waste water from acid stimulation should be treated in the same way as flowback from hydraulic fracturing, which is not allowed to be reinjected, and needs to be handled by a specialist treatment facility.

“But currently, waste produced from acid wash or matrix acidising can legally be combined with produced water and reinjected. We’re very worried about this, given that Brockham has a permitted reinjection well.”