In this guest post, he reveals that 80% of exploration licences, known as PEDLs, issued from 1996 up to 2015 no longer exist. 10% of the licences offered since then have not been taken up.

PEDL001 covers a wedge of land between Mansfield and Chesterfield in the east midlands. It was awarded to Coalgas UK Ltd to explore for mine gas in 1995 by the then Department of Trade and Industry.

It was the first PEDL to be issued and was in a collection of onshore petroleum licences awarded by the government under the seventh round, or auction.

Since then, a total of 349 PEDLs have been awarded to oil and gas companies. The most recent group of licences – the 14th round – were awarded three years ago in 2015.

Of these 349 PEDLs awarded since 1996, just 134 remain in operation – known as extant in the oil and gas industry. PEDL001 is one of them, now operated by Alkane Energy. But PEDL002, PEDL003 and PEDL004 and many others have disappeared from the list of UK PEDLs.

A total of 205 PEDLs have either been relinquished or surrendered before they completed their term. Another 10 companies have declined to take up the licence offer.

Based on the data available, the life of these relinquished PEDLs ranges from one to around 12 years.

So why has there been such a high failure rate and what does it mean for the most recently awarded PEDLs? To find out, I’ve been looking in the Oil and Gas Authority (OGA) data centre (link) and the UK Onshore Geophysical Library (link).

Why were 80% of pre-14th round licences relinquished?

PEDL operators must provide a relinquishment report to the Oil and Gas Authority (OGA) within three months of giving up a licence. This explains why the operator is relinquishing the PEDL and what work it has done.

The reports are published in the UK Onshore Geological Library – but only if the PEDL operator confirms that it gives permission. This may explain why 97 of what must be a total of around 205 relinquishment reports are available.

The information contained in these industry reports suggests that onshore oil and gas has done well to survive as an industry for viable investment to the end of 2018.

What do the operators say about why they gave up?

Here are quotes from some relinquishment report.

“Technical evaluation of the licence was based on data from ca 450km of oil exploration and 180km of coal exploration seismic and over 60 wells.” Link

“The 3D data set is still believed to be a very poor quality product.” Link

“On securing PEDL059 … Alkane appointed specialist consultants.  … The consultants concluded that a significant proportion of the mine workings were already likely to be flooded.” Link

“Alkane has requested an extension of the Second Term of the licence but has been advised that DECC is unable to grant this. Accordingly I hereby request to relinquish PEDL060 with immediate effect.” Link

“A final voluntary relinquishment of the licence was made in May 2011 ahead of the end of the second period to facilitate the inclusion of the acreage in the 14th Landward Licencing Round.” Link

“Access to SPPL1481 was always planned through an onshore to offshore long-reach drilling campaign. However, for the duration of this Licence, there remained an unlicensed area between PEDL 107 and SPPL 1481 that related to difference between the mean high water mark and mean low water mark (onshore and offshore licence boundaries respectively).” Link

“All the dry holes in the area appear to have failed due to being located off-structure.” Link

“Europa Oil and Gas drilled the Hykeham 1 (L46/12-17) and Hykeham 1z (L46/22-17z) sidetrack well to test the Gravel Pitts prospect. The first well failed to find the stratigraphic traps at the prognosed depth forecast. A previously unseen fault was detected and so the drilling rig pulled back.” Link

“Following the unsuccessful Sandhills-2 2Z appraisal well in PEDL113 and the dry hole result of the Bouldnor Castle Copse-1 well drilled in PEDL089 in 2005 which reduced the perceived prospectivity to zero, the PEDL151 Group decided to relinquish the licensed area in its entirety at the end of its second term” Link

“Unfortunately the Group has been forced to conclude that it is not possible to find a suitable site that would have any chance of being accepted by the Planning Authority or the local community…….It has reluctantly decided to relinquish the Licence.” Link 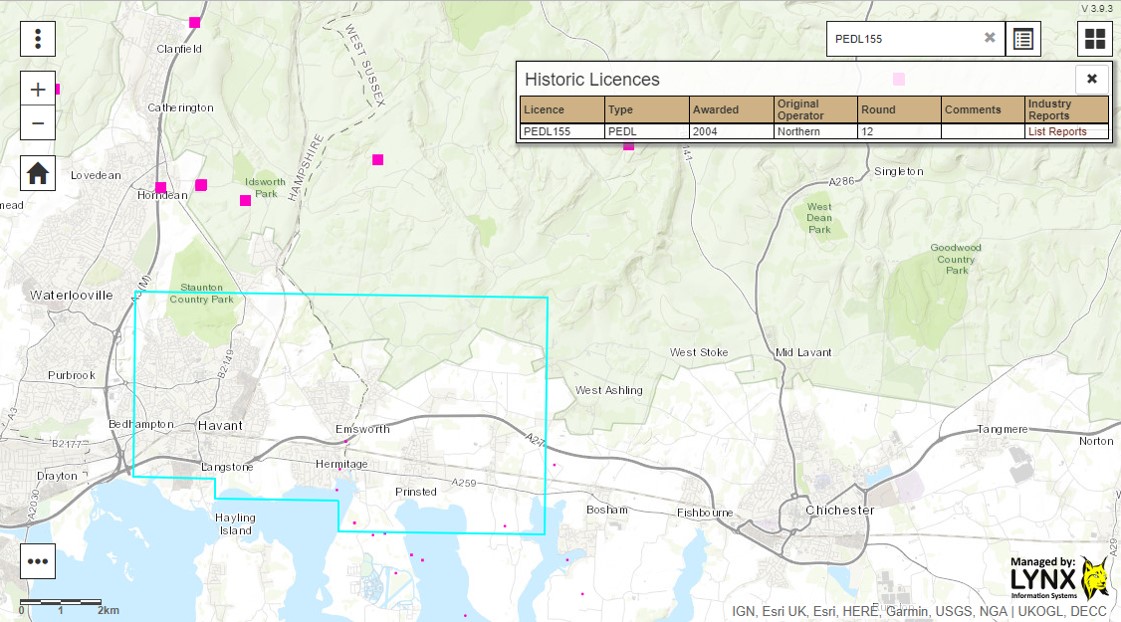 “Following agreement from DECC in 2011 the Initial Term of PEDL155 was extended to eleven years and the Second Term reduced to zero years. The licence was due for relinquishment in August 2015. Following the receipt of planning permission a wellsite was constructed in the adjacent Licence, PEDL256 from which the Havant prospect could be drilled, the prospect extending into PEDL155. Opposition from the Environment Agency has prevented the PEDL256 Group from getting the necessary approvals for drilling. Consequently the PEDL155 Group decided to relinquish the Licence in its entirety.” Link

PEDL159: awarded outside a PEDL round, relinquished 2015 after a total of seven wells drilled

“PEDL159 is being relinquished due to the complex structures within the Carboniferous strata making the area unsuitable for CBM development. Current economic and geopolitical would limit the viability and pace of a field development.

“Oil and gas exploration in the region has by-in-large, proved unsuccessful.” Link

These PEDLs in the Scottish Midlands and Somerset have been relinquished although no relinquishment reports are publicly available. UKOGL does, though, have a prospectivity report for coalbed methane in each PEDL.

Before there were PEDLs, there were ALs, CEs, DLs, EXLs, MLs and PLs. These were earlier versions of onshore petroleum licences.

The oldest existing onshore licence is CE001, granted to his Grace The Duke of Devonshire, on 26 March 1923 for land covering the Chatsworth Estate.

Not surprisingly the grant of this licence was symbolic, but it remains extant.

Including CE001, there are a total of 49 extant older licences. After his Grace’s Chatsworth licence, the next oldest is ML003 between Mansfield and Lincoln, dating back to a start date of 1959. This licence is expected to last until 2033, a term of 74 years.

We have no access to information about how many of these pre-PEDL licenses were awarded.

But from the numbering of the extant licenses listed at the OGA Data Centre, it appears that at least 600 could have been issued.

If so, that would mean there were at least 551 relinquishments and a minimum relinquishment rate of more than 90% for onshore licenses issued before 1996.

If at least 90% of historic licences were relinquished and 80% of licences issued from 1996 up to 2015, what does this mean for the future?

The 14th round offered 93 new onshore licences on 17 December 2015. 10% disappeared off the list early on when they were not picked up by the operator.

So will the remaining 83 licences see out their 30-year terms?

I expect the 14th round licences, awarded in 2015, with start dates of July 2016, will have a similar failure rate. It could even be higher because of geopolitical considerations and community awareness.

The successful 14th round companies have so far submitted just three planning applications. Two were in Rotherham and one in Derbyshire. All were refused by local authorities, though the decision on two were overturned at appeal. No work has been carried out on the sites.

The licences are now approaching the half-way point of their initial five-year exploration terms. The work commitments, which include securing seismic surveys and drilling and fracking wells, must be completed by 20 July 2021. This looks increasingly unlikely without changes in planning rules or an extension of the initial term.

I’ll return to the issue of the work programmes in 14th round licences in a future article.