New roads face Heathrow-style court action threat. BBC News reports that plans for a £28.8bn roads programme could be challenged in the courts for breaching the UK’s climate change laws.

Schlumberger to de-list from London Stock Exchange. World Oil reports that the Houston-based oil services group has announced it is cancelling its listing on the London stock market and cancelled admission of trading of shares on the LSE main market.

Court of Appeal blocks third runway plans for Heathrow Airport. The government’s backing for the scheme was ruled unlawful because it did not consider compliance with the Climate Change Act. Widely reported, including: The Guardian, BBC News, FT, Telegraph

Government says it will not appeal court decision that its backing for Heathrow’s third runway was unlawful on environmental grounds. FT, Sky News

Royal College of Psychiatrists goes fossil free. Medact reports that the royal college has announced it is divesting from coal, oil and gas companies. The multi-million pound investment portfolio will go free of fossil fuels with immediate effect. Energy Voice

Oil regulator to revise remit to address climate crisis. The Guardian reports that the Oil and Gas Authority was due to meet a government minister to discuss how it could contribute to tackling climate change while extending oil production from the North Sea.

Government lets fracking companies drill exploratory wells despite ban on extracting shale gas. The i reports the government has opened the door to future fracking by refusing to ban the drilling of exploratory wells. See DrillOrDrop report from 29 January 2020

JP Morgan economists warn climate crisis is threat to human race. The Guardian reports on a leaked report for the world’s major fossil fuel financier which says the earth is on an unsustainable trajectory.

Oil firms banking on hydrogen and CCUS due to climate pressure, Deloitte boss claims. Energy Voice reports on comments from Daniel Grosvenor on demand for information about hydrogen and carbon capture, usage and storage.

Methane emissions from oil and gas industry “vastly underestimated” – new study. DrillOrDrop report on US research which shows emissions of methane from fossil fuels had been underestimated by up to 40%. Nature, The Guardian

Horse Hill shut-off intervention begins. UK Oil and Gas plc announces that work has begun to shut off the ingress of formation water into its Horse Hill-2z horizontal well in Surrey. Production logging tools will be run along the 2,500ft horizontal section to identify the source of the water, thought to be near the base of the wellbore. The water will be isolated using a rigid setting fluid plug or conventional cementing.

Ineos still bidding to drill for underground gas in Scotland. The Ferret reports that Ineos is attempting to resurrect plans to drill for coal bed methane in central Scotland. Correspondence on the Scottish government planning website discloses that the company is urging officials to recommend in favour of a long-delayed application to extract gas at Airth near Falkirk.

Angus Energy loan balance reduction.  Angus Energy announces that Riverfort Global Opportunities PCC Limited and YA II Pn Ltd have converted £100,000 of the loan into Angus shares. This reduces the outstanding loan balance to £0.8m and increases the number of shares in Angus to 571,913,544.

Loan balance reduction. UKOG announces that its lenders, Riverfort Global Opportunities PCC limited and Ya II PN Ltd have converted £150,000 of its loan into UKOG shares. The transaction reduces the loan balance to £3m and takes the number of UKOG shares to 7,421,395,360.

West Lancashire residents urged to object to fracking plans. In Your Area reports on calls by Labour councillors in West Lancashire for local people to object by 6 March to Aurora Resources’ plans to frack at Altcar Moss.

Fracking giant Cuadrilla has agreement with university academics to vet earthquake data requests.  The i newspaper reports that under access agreement to Cuadrilla’s seismic fracking data, Bristol University promised to take consult the company over any FOI request. The university must take account of Cuadrilla’s representations on whether legal exemptions may apply for refusing to release the data or to even deny holding it. 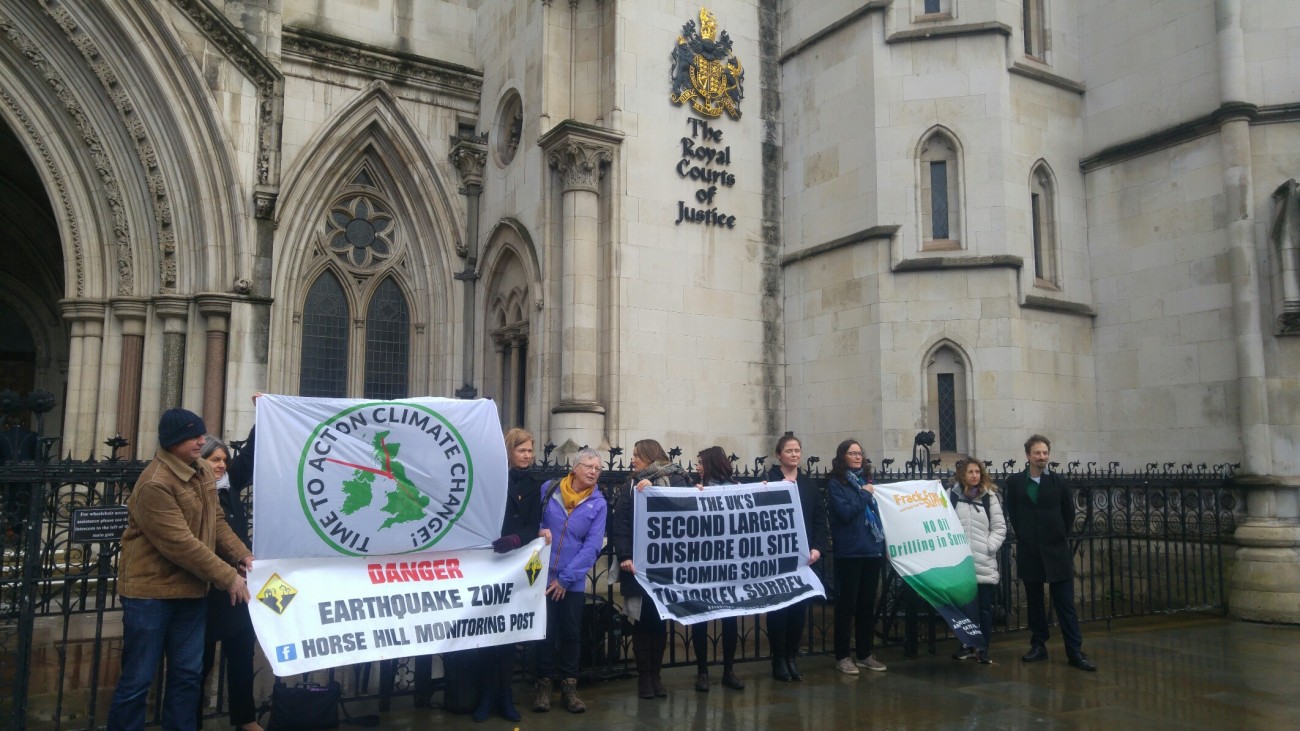 Campaigners outside the Royal Courts of Justice, 13 February 2020. Photo: DrillOrDrop

Fracking moratorium minister fired in reshuffle. DrillOrDrop report on who is in and who’s out in the reshuffle.

Plans to fast-track Shannon fracked gas terminal hit legal bump. The Irish Times reports that Friends of the Irish Environment has won the right to challenge the inclusion of the project in north Kerry on the rapid EU development list.

Councils ‘shocked’ by Wakefield’s decision to work with Extinction Rebellion, but leader says it’s ‘the right thing to do’. The Wakefield Express reports that Wakefield’s new council leader, Denise Jeffrey, has admitted that other local authorities are ‘a bit shocked’ by her decision to meet XR’s Pontefract co-ordinator.

Pension plans come under more pressure on climate risks. The FT reports that upgraded rules will demand further disclosure from trustees on how retirement funds will be affected by climate change.

Surge in plastics production defies environmental backlash. The FT reports that cheap shale gas has fed an investment boom in productions that often end up as waste.

Permian’s gas burning black eye is 30% worse than thought. Bloomberg reports on research by Rystad Energy which has find that the burning and releasing of vast amounts of gas into the atmosphere in America’s top shale basin is much bigger than previously thought when processing plants are included.

Ineos becomes principal partner to Meredes-AMG Petronas Formula One team. Ineos announces it has a five-year principal partnership deal with Mercedes ahead of the 2020 Formula One season. A new car unveiled today had Ineos branding on the rear wing and airbox above the driver’s head.

Cuadrilla injunction drops bar on key fracking protests. DrillOrDrop report on how the company has abandoned orders against slow walking and other protests on the highway and actions against the supply chain. Lancashire Evening Telegraph(15/2/2020)

IGas Energy reserves rise as it focuses on conventional business. Sharecast.com reports on an IGas update

10% support UK fracking – new record low in government survey. DrillOrDrop report on the first attitudes to shale gas since the moratorium on fracking.

Reserves and trading update. IGas publishes unaudited results for the year to 31 December 2019 .

David Cameron and William Hague turn down offers of COP26 climate summit job. The Guardian reports that the former prime minister and the former Conservative leader, William Hague, have been offered the job of president of the UN climate talks in Glasgow but both decline.

“Preparations for the retesting of the well are progressing both from an operational and a regulatory standpoint.

“Coordinating the availability and timing of services, equipment, personnel and other aspects of operations with the requirements of our regulators is imperative.

“These activities and approvals are often dependent upon one another.”

Anti-fracking campaign group puts out call for artists and creatives. On the Wight reports that Frack Free Isle of Wight is appealing for original artwork from people concerned about the impact of oil drilling on the the island’s landscape, wildlife, water, farming, tourism, climate change and wider environment.

Fears fracking just a mile away from Merseyside will go ahead despite government halt. The Liverpool Echo reports on plans by Aurora Energy Resources to frack near Formby.

Sacked climate summit chief may sue No 10. The Sunday Times reports that Claire Perry O’Neill, the former energy minister, is consulting lawyers after she was removed from her role running the UN climate change conference. She has told friends that Boris Johnson and his senior aides gave three difference reasons for her dismissal, the paper says.

Boris Johnson speeds up plans to ban sales of new petrol and diesel cars. The Sun reports electric vehicles may be the only option for drivers five years earlier than the current target of 2040.

China oil demand plunges 20% because of virus lockdown. Bloomberg Green reports the fall in demand is probably the largest demand shock for the oil market since the global financial crisis of 2008-9 and the most sudden since the September 11 attacks.