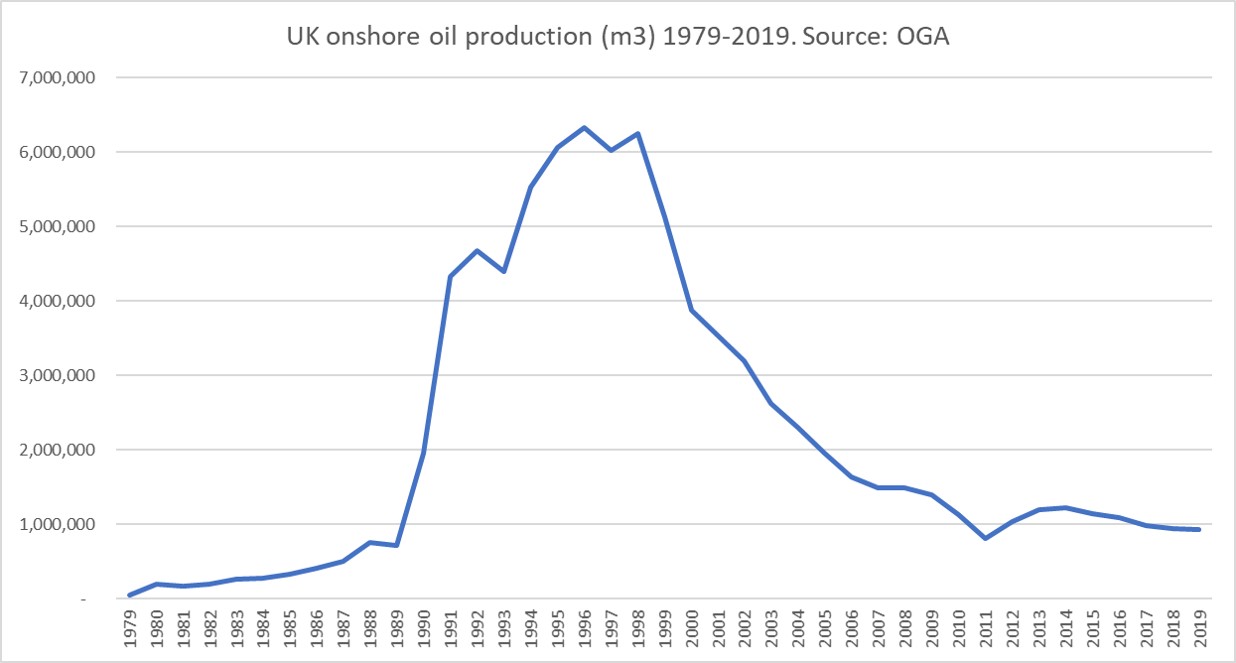 It was the fifth successive year of declining production and continued a general trend of falling output that began in 1999.

The onshore contribution to total UK oil production has also continued a fall that began in 2014.

As in previous years, most UK onshore production came from one oil field.

The figures do not include data from exploration and appraisal sites, such as Horse Hill in Surrey, which did not have production licences in 2019.

The year-on-year percentage fall was, however, the lowest for the past five years.

Onshore oil’s contribution to the UK total has also fallen steadily since 2014.

As in previous years, most onshore production (82.36%) was from Wytch Farm in Dorset.

This field has seen gradually declining production since 2013 but its contribution to total onshore production has not fallen below 77% in the past 10 years.

The remaining 18% of UK onshore oil production was from 32 other sites across England. Together, they produced 162,856m3.

Of these sites, the highest producer was IGas’s Welton field, in Lincolnshire.

IGas has carried out the first phase of a waterflood project at Welton, where a suspended well was used as a water injector to increase production.

Welton has been the second largest onshore oil producer in the UK for each of the past 10 years.

Humbly Grove, operated by EP UK Investments, in Hampshire, saw its highest annual production since 2014, at 18,407m3. This was up 16% on 2018. The site was ranked number 4 on production, overtaking IGas’s Stockbridge field, also in Hampshire, for the first time since 2014.

Not surprisingly, most of the production came from one company, Perenco Oil & Gas, the operator of the Wytch Farm. The company’s total, including production from its Kimmeridge and Wareham fields, was 770,325m3 in 2019, 83% of the UK onshore oil.

IGas produced from 22 sites in 2019, with a total volume of 124,344m3. The total was down slightly but the company’s share of the UK onshore total remained stable on last year at 13%.

UK offshore production in 2019 was at the highest level since 2011.