The energy minister, Claire Perry, attended most of a 95-minute meeting with the shale gas industry which she said she had dropped in on, MPs heard this evening. 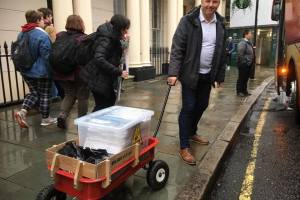 Campaigners delivered a letter to Downing Street this afternoon, signed by more than 8,000 people, calling for an immediate halt on fracking in the UK.