Fracking refusal: What the opponents of Preston New Road said

Pat Davies, Preston New Road Residents’ Group “Absolutely ecstatic. The community can breathe again. This has had a huge impact on peoples’ lives. We are delighted the committee have spent enough time considering this. I am delighted that Cllr Green was the voice of reason. We also owe […]

Cuadrilla’s bid to frack in the Fylde stalled today as Lancashire County Councillors refused a second planning application. In a wider margin than expected, the council’s development control committee voted by nine to three with two abstentions to reject the scheme to drill, frack and test up to […]

Keep in touch here with what’s happening at the Lancashire County Council committee that is deciding Cuadrilla’s application to frack at Preston New Road. Updates as they happen. 12.15 The cabinet member for planning, Cllr Marcus Johnson, who voted against refusal, said he stood by the decision of […]

Residents opposed to Cuadrilla’s application to frack at Preston New Road in Lancashire have complained that the county council’s planning officer had undermined the scale of objections.

A residents’ group opposed to Cuadrilla’s plans to frack at a site in the Fylde area of Lancashire released the opinion of a specialist barrister this afternoon. It contradicts legal advice given to Lancashire County Councillors last week that in the event of an appeal against refusal there would […]

Opponents of Cuadrilla’s plans to frack at Preston New Road in the Fylde say their barristers have confirmed there are valid reasons to refuse the application and that the risk of costs would be small if it went to appeal. The Preston New Road Action Group wants to […]

Two of the country’s environmental campaign organisations are rallying support for Lancashire County Councillors who voted to refuse Cuadrilla’s application to frack at Preston New Road.

Cuadrilla’s Roseacre Wood application attracted 205 letters of support. 14 speakers addressed the committee in support of the plans. They said the application, if approved, would create jobs, benefit the local national and local economy and contribute to tackling climate change. Here is a selection of the arguments […] 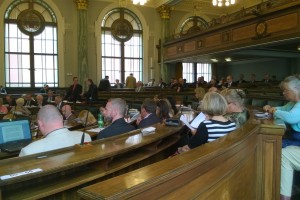 More than 15,600 people objected to Cuadrilla’s application to frack at Roseacre Wood and signatories to petitions against the plans totalled more than 91,000. Nearly 30 people gave evidence against the scheme at the planning meeting. Many were concerned about the impact of Cuadrilla’s fracking plans on their health, […]