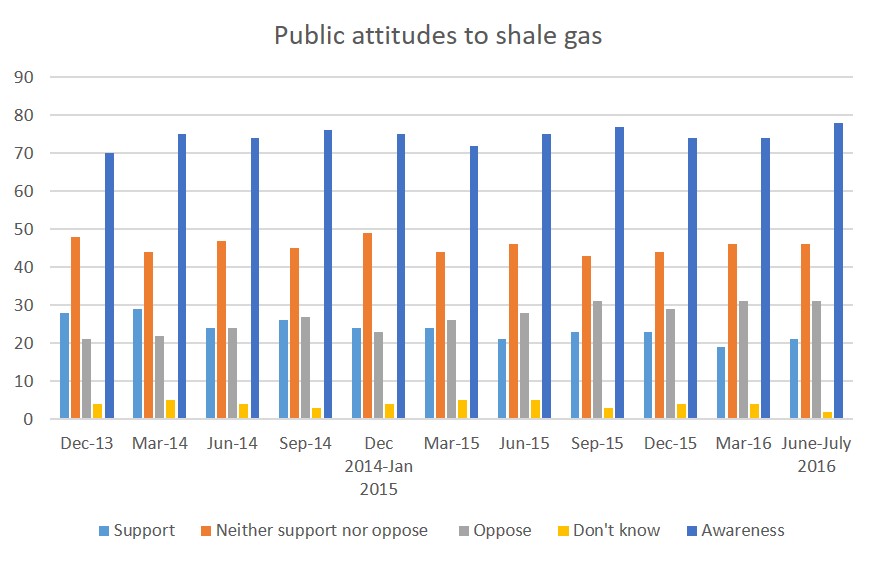 Support for fracking has risen slightly, according to the latest survey in ongoing government research. But the proportion who “strongly support” fracking has dropped to its lowest level.

Opposition to fracking has remained steady at 31%, still the highest level since the survey began.

As in previous surveys, the largest proportion of participants said they neither supported nor opposed shale gas. This remained unchanged at 46%.

The quarterly survey of public attitudes on energy and climate change, known as the Wave Tracker, first asked questions about shale gas and fracking in December 2013. The latest survey, Wave 18, interviewed more than 2,000 households in late June and early July 2016. The findings were published last week (28 July 2016).

In the latest poll, support for fracking stood at 21%, up two points from the record low in March 2016. Overall, support remains eight points behind the peak of 29% in March 2014.

According to the latest survey, the proportion of those most enthusiastic about fracking had halved since the previous survey. The authors said:

The proportion of people strongly supporting fracking is down from a high of 6% in December 2013.

The proportion who said they opposed fracking has risen ten points, from 21% to 31%, in the two and a half years since the question was first asked. Opposition in the latest survey was unchanged from March 2016. Strong opposition to fracking has remained about 12% for the past six surveys. 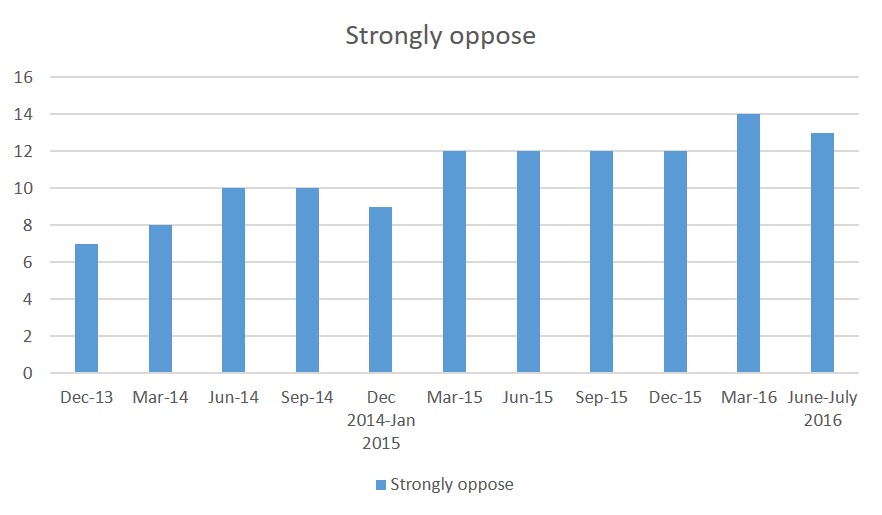 Asked why they opposed fracking, participants the main reasons given were:

Gap between support and opposition

The gap between supporters and opponents has narrowed slightly since the survey carried out in March when it was at record levels. In this survey, 10% more people opposed fracking than supported it.

The reasons given for neither supporting nor opposing were:

Those claiming they could see both positives and negatives in shale gas rose from 8% in Wave 17 to 11% in Wave 18.

According to the latest findings, 78% of participants were aware of fracking. This is the highest level since the question was first asked in 2012. It was four points up on the findings in the previous survey.

Of those who took part:

According to the survey, awareness higher in the following groups: