More than 50 local people took part in a protest in Billingshurst against plans to explore for oil nearby at Broadford Bridge. The event, supported by opponents of onshore drilling from across the Weald, comes as Kimmeridge Gas and Oil Ltd prepares to drill at the site at Wood Barn Farm. Latest DrillOrDrop post

‘The community has not been informed enough by either the oil company, the local Parish Council or West Sussex County Council. If it wasn’t for leaflets from Keep Billingshurst Frack Free posted through the door, most residents wouldn’t even know about the site. We did a survey recently about issues affecting the area, and asked 36 residents what they thought about fracking: 20 said they were against it, two were for it and the rest needed more information. That says it all.”

“In the last couple of weeks, we’ve found out that UKOG have taken over the site, but we don’t know what they’ve actually got permission to do. You’d think given that we are the residents who will have drilling on our doorstep, we should be told. We want to know how we’ll be affected by the drilling, but we’re not getting any answers. There hasn’t been enough consultation on safety generally. I would like the company to share the details of what they intend to do at the site. Surely they have a social responsibility to let locals know.” 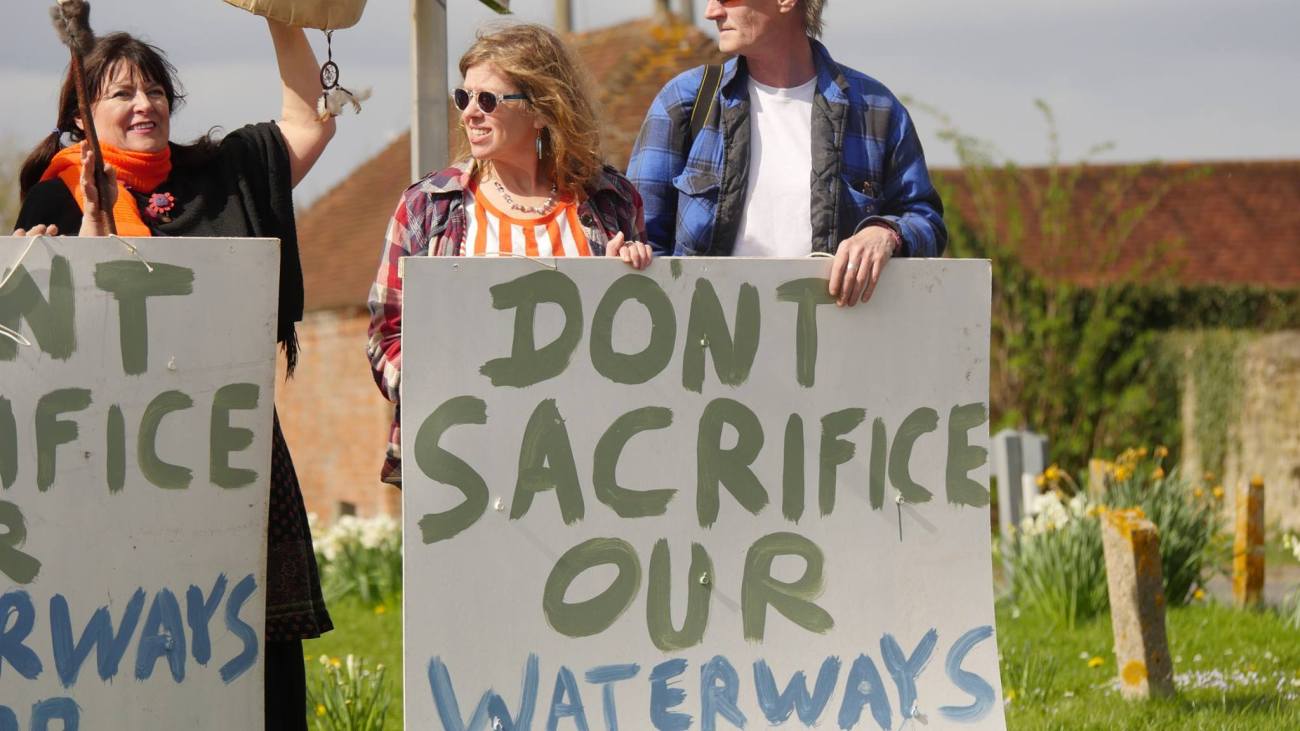 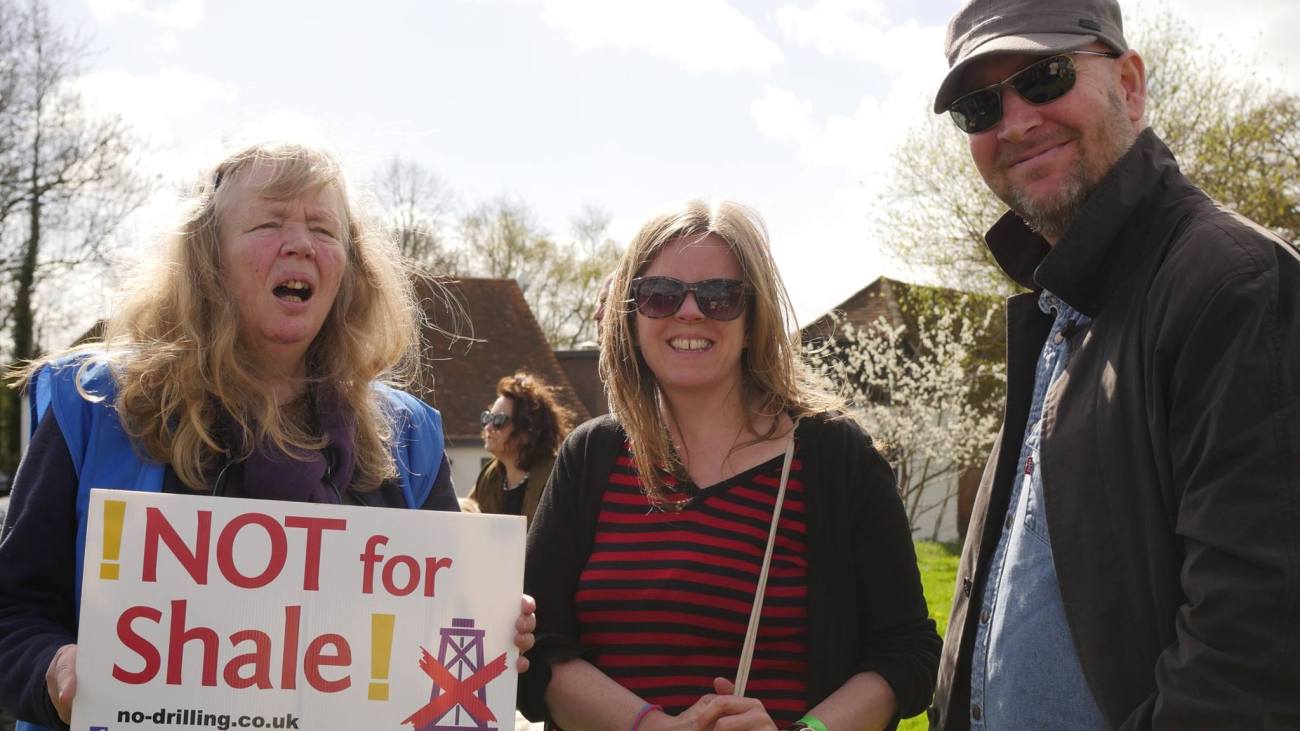 Activists with an anti-fracking slogan painted on their backs took part in a demonstration at the UK Investor Show in protest at Union Jack Oil’s stand. The “naked truth” protest was part of Reclaim the Power’s Break the Chain protest. 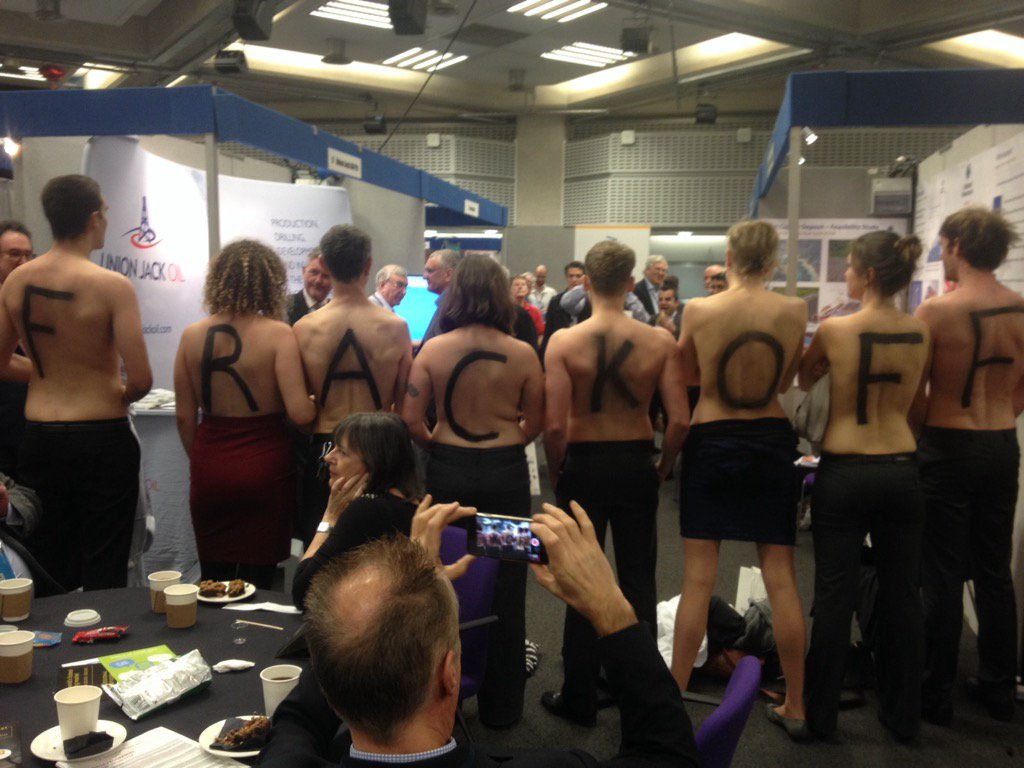 One of the participants said:

“We have put our bodies in the way today, to protest the work of Union Jack Oil in furthering the fracking industry and to disrupt their reputation.

“UJO has been exploring for unconventional oil and gas and doing field development work for possible future fracking sites in the UK for the past two years.

“Whilst they regularly attempt to disguise their actions behind legal jargon, they have used flow testing and acid fracturing to develop the case for unconventional oil and gas extraction, either by them or another company. It is essentially gateway drilling.”

“I wanted to go down to the site on Preston New Road to see for myself what was happening – there were lots of drivers beeping their support in opposition to what Cuadrilla are doing.

“It is completely wrong of the Government to ignore local democracy and the wishes of people in Lancashire by allowing Cuadrilla to frack despite the strong opposition to it.” 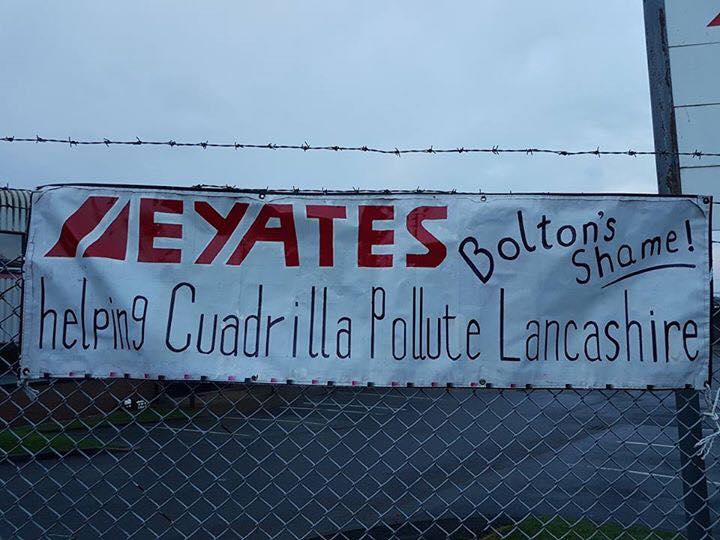 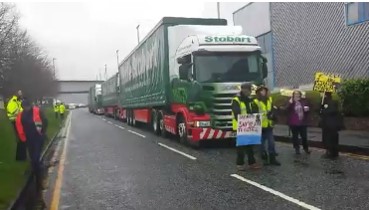 Reclaim the Power said a group of anti-fracking campaigners held a party for Centrica’s chief executive, Iain Connor, at the company’s head office, to mark his £1.4m bonus.

The event was part of Reclaim the Power’s Break the Chain protest against the supply chain of the fracking industry. One of the activists said:

“Without his company bankrolling fracking in Lancashire, the industry would be dead in the water.

“Fracking may be devastating to local communities and have no public backing, but kudos to Iain for sticking with it through the tough times. Going forward, we hope Centrica continues to profit from Lancashire’s sacrifices, and that you can use your millions to shield yourself from climate catastrophe.”

Reclaim the Power placed satirical posters overnight at bus stops in Leeds as part of its Break the Chain protest. The posters, based on similar branding by Yorkshire Water, warning that liquid waste from the shale gas industry would come to the treatment works as Knostrop in Leeds.

“Yorkshire Water’s most recent advertising campaign has refered to clean water as a ‘liquid birthright’ but we know this could be threatened if the Knostrop treatment works accepts fracking fluid. That’s why we decided to do some extra advertising for them and let people around Leeds know what could be on the way. There’s currently no fracking in the UK, and Yorkshire Water and FCC Environment can cut ties with the industry now before it gets started to help protect the people of Leeds and the global climate”.

Reclaim the Power said members of anti-fracking group, Bristol Rising Tide, blocked the entrances to a Lancashire quarry, used by Aggregate Industries, a supplier to Cuadrilla’s Preston New Road shale gas site near Blackpool. The 11-hour blockade, using swings on the height barriers, led to queues of lorries attempting to go to the quarry. Reclaim the Power said two people had been arrested.

This was the first day of a scheduled fortnight of action by Reclaim the Power called Break the Chain, aimed at the supply chain of the shale gas industry.

“I condemn in the strongest terms this irresponsible intimidation of companies and road users trying to go about their lawful business and get on with their daily lives. The Police have a difficult enough time without having to devote resources to manage people from outside the area who are wasting everyone’s time and standing in the way of jobs and opportunity for local people.”

The Bristol Post reported on 5 April 2017 that a Edward Crawley from Bristol is due to appear before Blackpool Magistrates Court on 12 June, charged with aggravated trespass. A 40-year-old woman, also from Bristol, was arrested on suspicion of obstruction and disrupting a person engaged in lawful activity but was later released without charge. 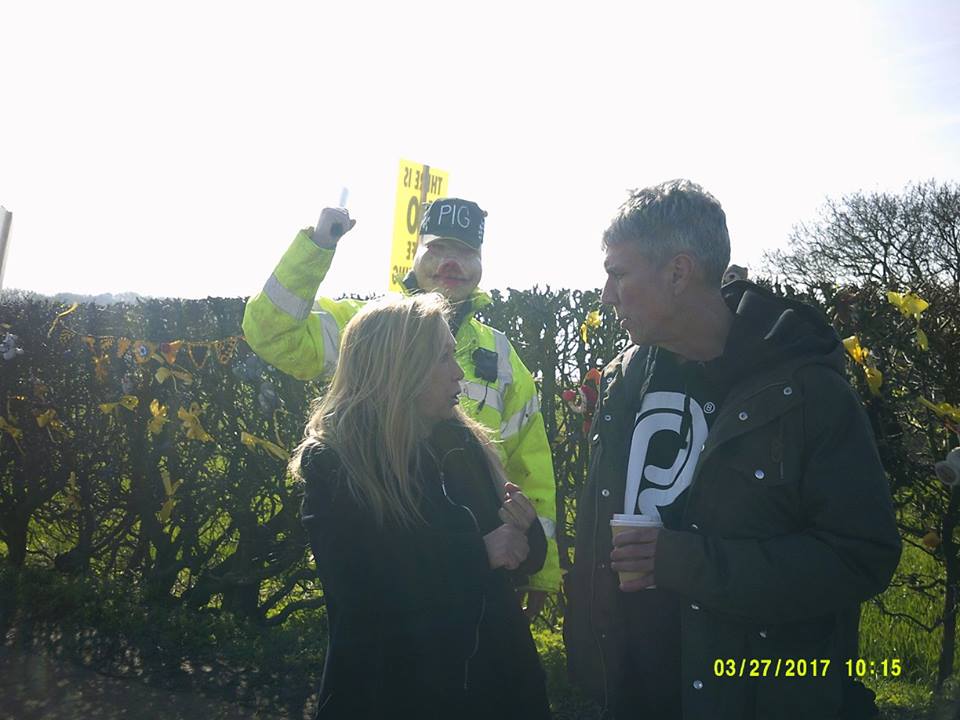 Video by the Blackpool Gazette:

Opponents of fracking took part in a lock-on protest outside the entrance of A E Yates, the site construction contractor for Cuadrilla’s Preston New Road, shale gas site.

The protesters unlocked themselves after five hours and received a warning from police.

Anti-fracking campaigners took part in a cycle ride, called On Yer Bike, Cuadrilla, to protest about the shale gas site at Preston New Road and the loss of the cycle lane. 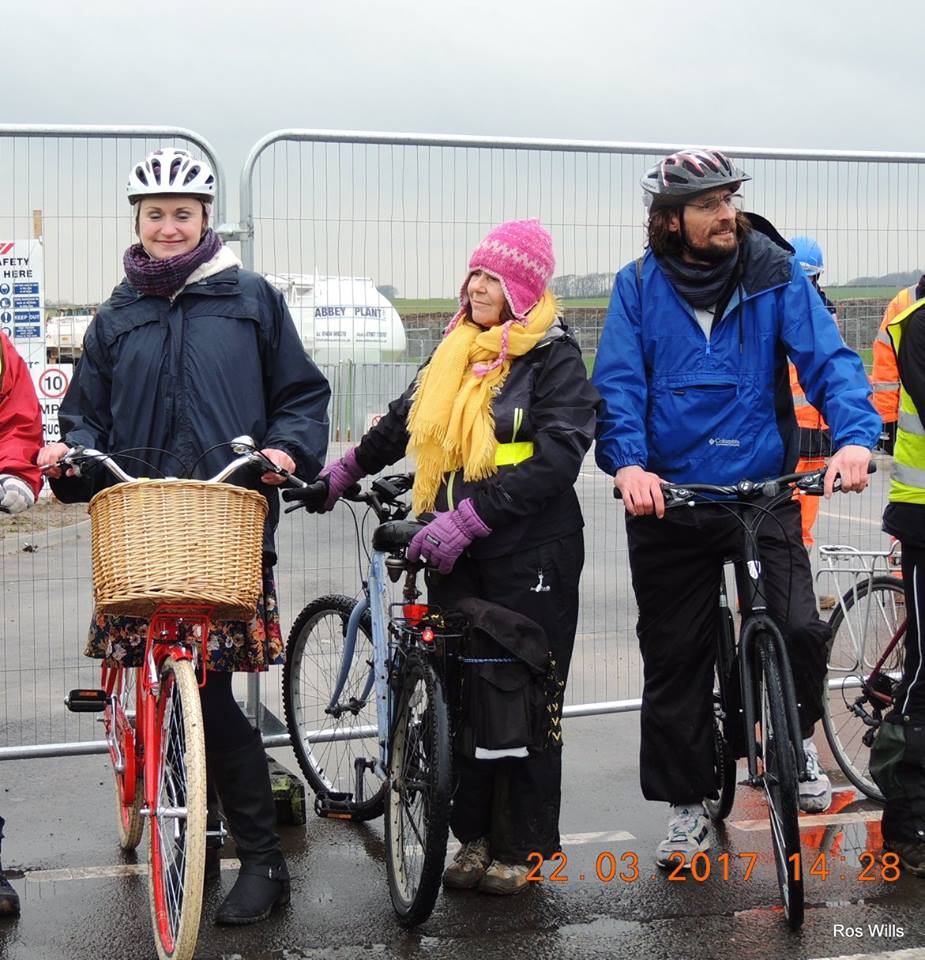 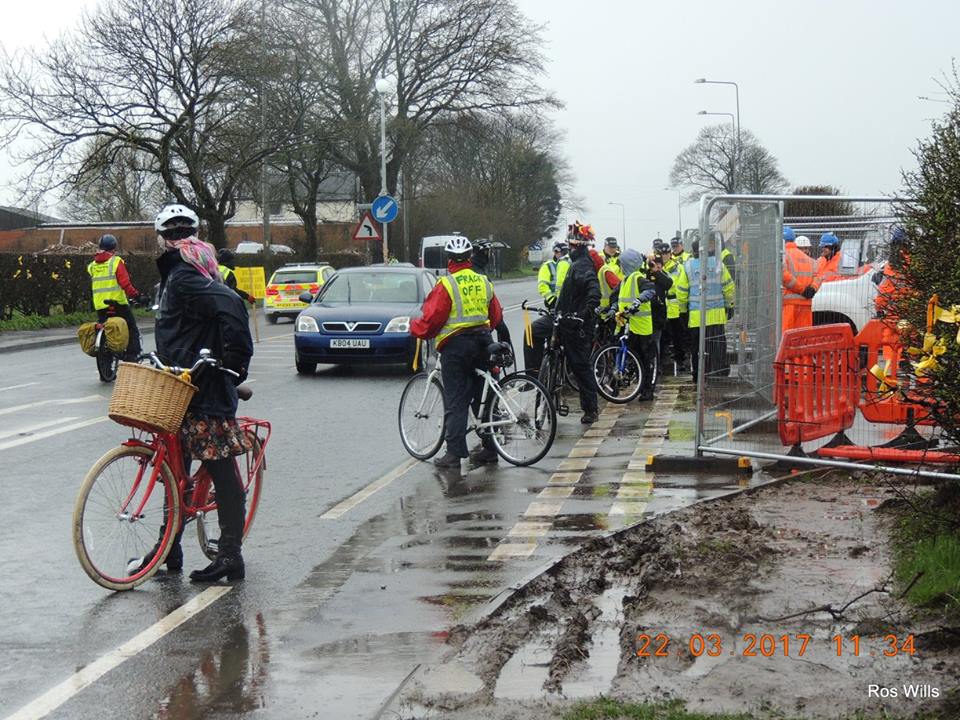 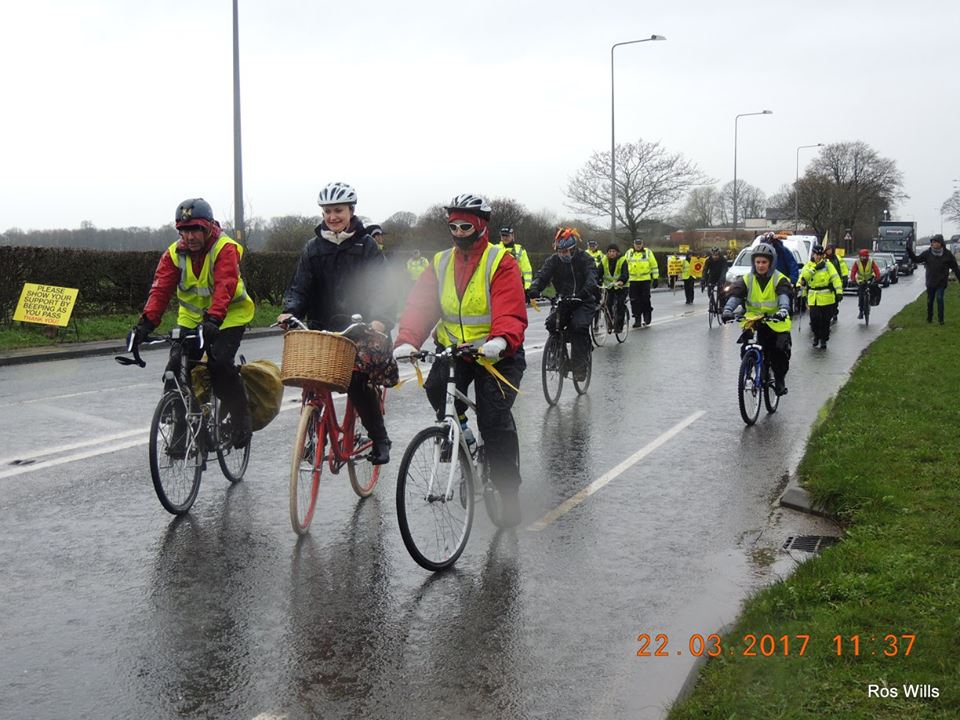 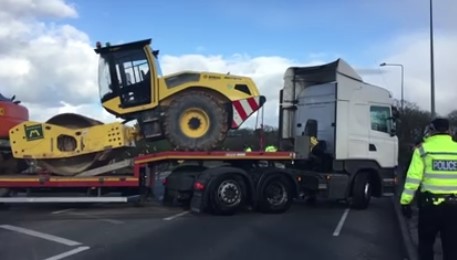 Lorry leaving the Preston New Road site, 21 March 2017. Photo: from a video by Refracktion (see below)

Opponents of operations at Cuadrilla’s shale gas site complained as an articulated lorry failed to negotiate the exit to the site. There had also been complaints about mud on the road from the site. On 23 March, Lancashire County Council announced it was reducing the speed limit on Preston New Road from 50mph to 30mph and then 20mph outside the site.