Opponents of fracking at Kirby Misperton in North Yorkshire say they are to begin packing up a camp outside the village.

They declared victory over the fracking company, Third Energy, against what they said were impossible odds. And they warned:

“Any fracking company planning to exploit this land for your own profit and personal gain: Expect us.”

Their announcement, made this morning, came after Third Energy began removing equipment from its well site. The rig left earlier this week, along with convoys of tankers bringing out water.

Third Energy said it was ready in November 2017 to frack the KM8 well. It has been waiting since then for a decision on fracking consent from the Business Secretary, Greg Clark. The most recent delay follows Mr Clark’s request for an assessment of its financial resilience.

“In January 2017 we pledged to the local community that KMPC would remain and continue its campaign of direct action until Third Energy were no longer a threat to the area. The last two weeks have seen convoys of fracking equipment leaving the site and this week we celebrated as the rig was finally removed.

“It’s clear that Third Energy are not going to be fracking anytime soon, and so the time has come to begin packing up the Kirby Misperton Protection Camp.”

“We now begin the process of returning the field to its former state and will be arranging community work days over the coming.”

A smaller camp, called the Forward Protection Camp, established along roadside verges next to the site entrance will continue, the statement said.

Campaigners established the main protection camp in December 2016, on the day the High Court dismissed a judicial review of the planning permission granted to Third Energy for fracking by North Yorkshire County Council.

There have been daily protests and rallies outside the site gate, with festivals and visits from local and national politicians.

In October last year, three campaigners scaled the rig and two remained overnight before being brought down by a specialist police team. As the rig left this week, one campaigner climbed onto the lorry. She was later cautioned. 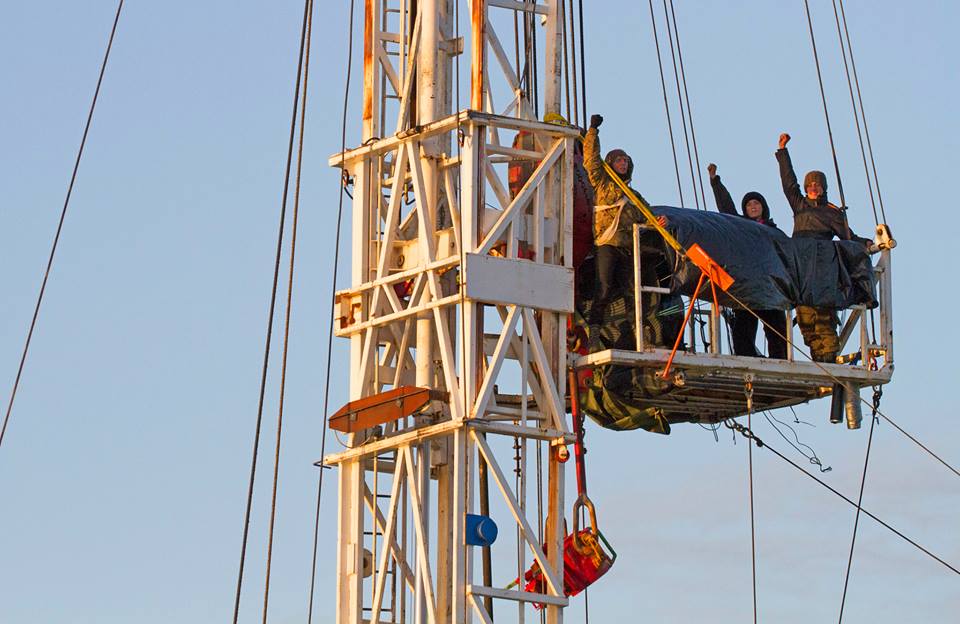 In today’s statement, the camp claimed a victory for opponents of fracking throughout the local Ryedale district:

“Ryedale’s victory is down to the many layers of the campaign working tirelessly together and all pulling in the same direction.

“We have achieved what many people said was an impossible task. The odds were stacked against us at KM8 – the pad was built, the well was drilled and all the necessary infrastructure was in place. If we can beat them at those odds, other communities can feel empowered to do the same.

It has been an honour and a privilege to meet and know so many campaigners, and we offer our sincere gratitude to everyone who has been part of, or support, KMPC.

“It’s been wet, cold and muddy”

“It’s been wet, it’s been cold and it’s been muddy, and we would like to thank all those who offered us warmth and rest in their homes. We thank everyone who gathered with us in the cold of last winter to build the camp, and those who came week after week, generously delivering food, water and wood, and of course the caring group who delivered lovingly made, hot meals during the busy times of action.

“We thank those who have donated money, and our friends in larger organisations for their generous support.

“We offer our utmost respect to our neighbours in Kirby Misperton, and thank everyone who has offered encouragement and support so selflessly, even as the burden of this national struggle has fallen at their door.

“We are humbled by the strength of the local councillors who have taken a principled stance in support of the camp. We thank all of the MPs and political party members who have visited the gates, inspiring us with their speeches and their plans to bring about a UK wide ban on fracking.

“Finally, our ongoing solidarity goes to our friends at the Forward Protection Camp who continue to keep a permanent watch on the gates, with thanks and admiration for their immense contribution to the protection of Kirby Misperton.”

“We are sure that the residents of Kirby Misperton who have had their daily lives disrupted by the activities of the protestors, many of whom are not local, will breathe a sigh of relief at the news they are leaving the area, as will our employees and suppliers who have been regularly intimidated and threatened.

“The UK has a strong regulatory framework in place, and it is understandably taking some time to make sure that our project near Kirby Misperton meets all of the requirements put in place by the government to protect the environment and communities in relation to onshore natural gas development.

“In January, the Secretary of State confirmed that he was satisfied that Third Energy has met all of the thirteen technical requirements set out in section 4A of the Petroleum Act 1998. We are currently working with the government on the final step of the regulatory process which involves providing the financial information requested to facilitate the final Secretary of State consent for our Hydraulic Fracture Stimulation programme near Kirby Misperton.

“On completion of the approval process we will finalise our operational arrangements and move forwards with the Hydraulic Fracture Stimulation and production of the KM-8 well; delivering some much needed gas for power. We thank the local community for its patience and can confirm that Third Energy plans to be working in the Vale of Pickering for many years to come.”

At times, protesters criticised the policing operation for being heavy-handed and disproportionate.

In October 2017, tea lady, Jackie Brooks, was kettled by officers after she refused to move her table outside the site.

Figures from North Yorkshire Police show that 85 people were arrested in relation to fracking at Kirby Misperton from September 2017 to February 2018.

Of these, 62 people were charged mostly for obstructing the highway.

There are no figures yet for the number of convictions and many trials have yet to go ahead.

“Throughout this operation we’ve been balancing the needs and wishes of everyone at Kirby Misperton. We will continue to work with people on all sides of the issue, ensuring those who remain and want to protest can do so safely, and minimising any disruption to the local community.”

Reclaim the Peace, a Facebook group which describes itself as representing people inconvenienced by protests around the UK, welcomed the decision to close the camp.

In a statement on its Facebook page, the group said:

“We look forward to the protesters honouring their promises to return the illegally occupied field to its original state, and to leave sufficient money in an escrow account if that is not possible.

“Should the protesters decide to return to Kirby Misperton we also ask that they consult with the local population on whether their presence is required, and stop using false statements like “99.2% said no to fracking”. There was no survey done on fracking, and this figure refers to the number of objections to the planning proposal versus the number of letters of support.”